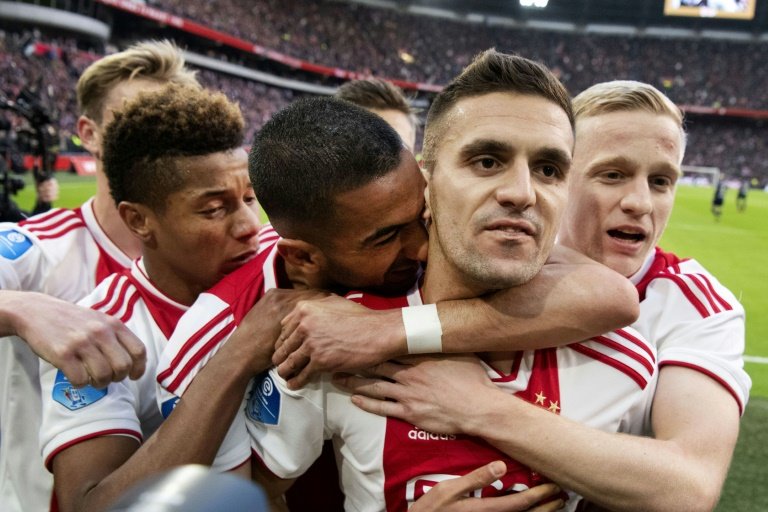 Dusan Tadic kept Ajax on course for a historic treble on Tuesday after scoring twice and setting up another in his side's 4-2 win over Vitesse Arnhem that moved them three points clear at the top of the Dutch Eredivisie.

Four-time European champions Ajax have warmed hearts with a thrilling run to the Champions League semi-finals that has recalled the glory days of Johan Cruyff and Total Football.

They inched closer to domestic glory with a sixth straight league win thanks to a Hakim Ziyech strike four minutes before the break, a second-half brace of penalties from Dusan Tadic and a powerful Matthijs de Ligt header just before the hour mark.

However coach Erik ten Hag will be hoping for tighter defending when they travel to London next week to take on Tottenham Hotspur in their first semi-final in Europe's premier competition since 1997.

Seventh-placed Vitesse were never in the game once the hosts opened a 3-0 lead through De Ligt but they twice pulled goals back through Navarone Foor and Oussmana Darfalou.

Ajax, who are also in May's Dutch Cup final against Willem II, are alone at the top of the league ahead of rivals PSV Eindhoven's trip to Willem on Thursday.

They opened the scoring in typically flamboyant style, Ziyech showing why he has some of Europe's top club's eyeing him when he span and finished first-time Tadic's cross.

The hosts put the match beyond Vitesse's reach with two goals in four minutes after the restart, Tadic first slotting home his first spot-kick of the night in the 54th minute following a foul on de Ligt.

Defender de Ligt then made it three when he headed in his third league goal of the season from Lasse Schone's corner, but Foor thumped home a superb volley just seconds after to cut the lead to two.

Ajax extended their lead back to three through Tadic's second penalty with 10 minutes left only to concede almost straight away again, Darfalou nodding a second consolation past Andre Onana.