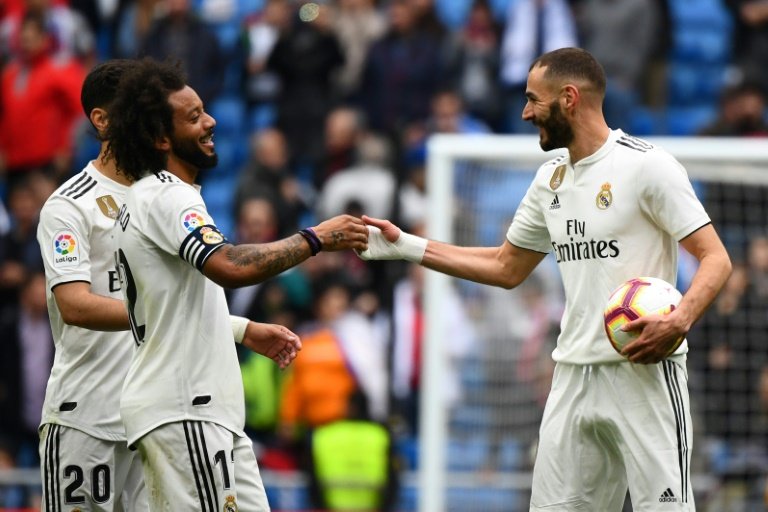 Karim Benzema was called the world's best striker by Zinedine Zidane after scoring a hat-trick for Real Madrid against Athletic Bilbao on Sunday. / © AFP

Zinedine Zidane said Karim Benzema is the best number nine in the world after his hat-trick led Real Madrid to a 3-0 win over Athletic Bilbao on Sunday.

Benzema has been one of the few bright sparks in an otherwise dreary campaign for the European champions and his second-half treble at the Santiago Bernabeu took his tally to 30 goals for the season.

"What he has done here over 10 years means everything," Zidane said. "For me he is the best, but others might disagree."

Victory moves Madrid four points behind second-placed Atletico and keeps them 13 adrift of Barcelona, while Bilbao stay seventh, with their chances dented of sealing a spot in the Europa League.

Benzema's advance in the absence of Cristiano Ronaldo and surge since the reappointment of Zidane comes in stark contrast to Gareth Bale, who was whistled when introduced as a substitute here and frequently during his 20 minutes on the pitch.

For all the impatience of the home crowd, it was Bale who won the corner for Benzema's second and then teed up his team-mate's third in injury-time.

But his sixth season at Real Madrid will surely be his last, with Zidane saying little either to express support or suggest he wants the Welshman to stay beyond the summer.

"The shame was he had a chance to score and I felt sorry for him because I would have liked him to score today," Zidane said.

Bale and Benzema were left with the gargantuan task of filling the void left by Ronaldo's departure last summer and while Bale seems to have shrivelled under the weight of expectation, Benzema has thrived.

The 31-year-old has now claimed all of Madrid's last eight goals in La Liga, a run that includes five matches, while in his last seven games, he has scored 10.

Benzema said at the start of the season he wanted 35 in all competitions and, despite his opportunities being reduced by his team's early exit in the Champions League, he is now only five short with the same number of games left to play.

Zidane has already said he expects Benzema to stay and on this evidence it is easy to see why. Without him, Madrid lacked spark in the final third and, in the end, the emphatic scoreline flattered them.

They were particularly underwhelming in the first half and Bilbao's Inaki Williams might have scored early in the second had the 22-year-old Jesus Vallejo not made an excellent last-ditch intervention.

It was from the counter-attack that Madrid took the lead as Toni Kroos was allowed to stroll forward unattended and feed Marco Asensio out wide. Asensio crossed for Benzema to head home.

The game was reduced to almost a walking pace around the hour mark, with the Madrid fans roused only to jeer the introduction of Bale, who came on with Isco, with 20 minutes left.

But it was his run in behind that won the corner for Benzema's second, another header, this time at the back post, before a comical mix-up in the Bilbao defence gifted him his hat-trick.

Iago Herrerin rushed out to intercept a ball over the top but made a mess of his headed clearance, the ball falling to Bale to tee up Benzema, 30 yards out but with the goal open.

Earlier on Sunday, Getafe's unlikely march towards Champions League qualification continued as they struck an impressive 3-0 victory at home to Sevilla.

Three wins on the bounce had seen Sevilla jump above them but Getafe reclaimed control as a pair of penalties, one from Jaime Mata and another from Jorge Molina, put them two up, before Molina added a third.

Both sides finished with 10 men after Sevilla's Sergio Escudero was sent off at the end of the first half and Getafe's Djene Dakonam followed in the 74th minute.