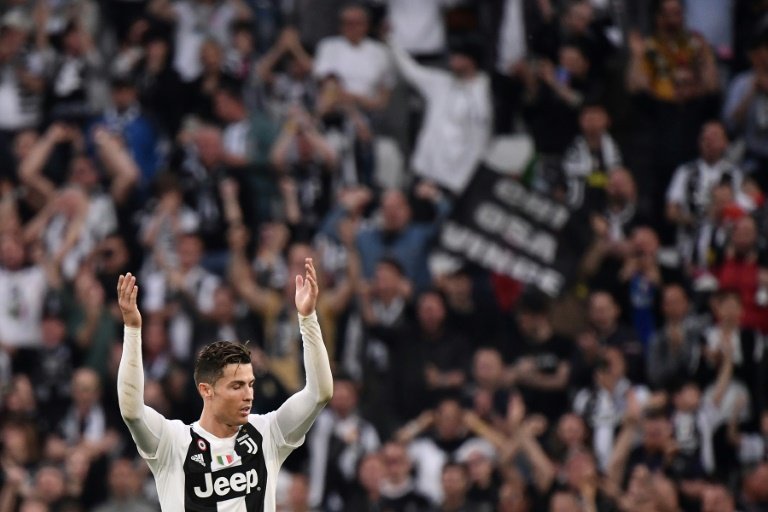 Cristiano Ronaldo said he was "1,000 percent committed to staying" with Juventus next season as he claimed his first Serie A title and Juventus their eighth in a row on Saturday.

Massimiliano Allegri's side had needed just one more point for a 35th Scudetto and their latest title triumph helped ease some of the pain of their shock Champions League exit at the Juventus Stadium to Ajax on Tuesday.

And a come-from-behind 2-1 win over Fiorentina was enough to give them a 20-point lead on nearest rivals Napoli with five games to play.

But Alex Sandro's diving header on 37 minutes and an own goal from Fiorentina defender German Pezzella after a Ronaldo cross in the 53rd minute sealed another title to ease their European disappointment.

"It was a great season and I adapted well. We won the Scudetto and the Italian Super Cup, which is not easy to achieve," said Ronaldo.

"It didn't go well in the Champions League but next year is a new page, the fans all want it and so do we.

It was the 34-year-old's sixth domestic league title, having won three with Manchester United and two with Real Madrid.

The Portuguese star now has 28 trophies in total, including the Euro 2016 title.

He has scored 19 goals and had six assists, and is in the running for the top-scorer award along with Sampdoria's Fabio Quagliarella, who has 22 goals, and AC Milan's Krzysztof Piatek on 21.

Juventus have lost only two matches, against Genoa and SPAL, with 28 wins and three draws.

Their eight straight title sees them overtake French club Lyon for the record of consecutive victories in the top five European leagues.

"I'm very happy because we've achieved an important goal," said Allegri, who becomes the first coach to win five consecutive Serie A titles. He has six in total, having also won with AC Milan, one behind Giovanni Trapattoni, who has seven. 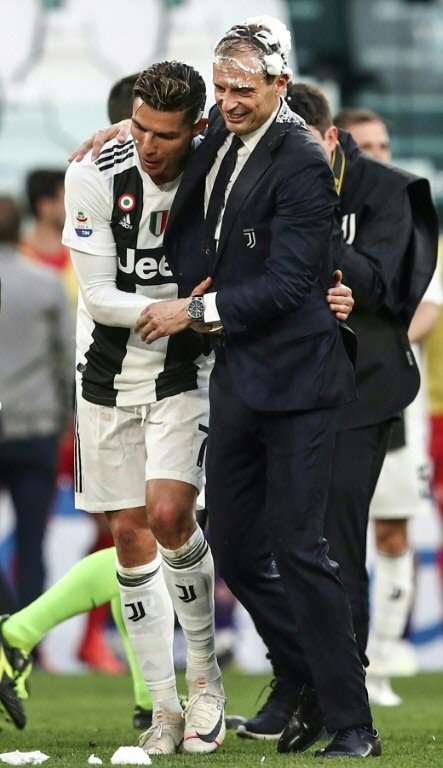 "Next year is a new page:" Cristiano Ronaldo (L) and coach Massimiliano Allegri (R) confirmed they are staying at Juventus / © AFP

"We had an amazing season and we won 50 percent of the competitions we participated in.

"Of course, we are disappointed by the elimination of Tuesday but a title is celebrated.

"We won it five days from the end and that's all about what the lads did on the pitch. Despite our points in advance, it was not easy."

Juventus also equalled the record for the earliest the Italian title has been won, with five games to spare, achieved by Torino in 1948, Fiorentina in 1956 and Inter Milan in 2007.

Juventus succeeded despite having been hit hard by injuries with defender Giorgio Chiellini out along with Sami Khedira, Mario Mandzukic, Paulo Dybala and Douglas Costa.

Ronaldo threatened early, but defender Milenkovic gave Fiorentina hope of a first win in eight trips to the Juventus Stadium.

Giovanni Simeone had the ball in the back of the net on 25 minutes but the goal was ruled offside, before Sandro got his head to Miralem Pjanic's corner to pull the teams level before the break.

Ronaldo pushed forward after the break, crossing for Federico Bernardeschi, but Pezzella clumsily turned into his own net.

Allegri brought on teenage star Moise Kean in place of Bernardeschi on 74 minutes, but the 19-year-old could not add to his six goals in his previous six appearances.

"We were greatly disappointed this week, but now it's time to party," said Chiellini, who has played a part in all eight league triumphs.

"We've beaten record after record, we had an extraordinary championship," said the 34-year-old.

"The Champions League is a competition which comes down to details. You can play well for nine months and then compete on a week where things are slightly off and it's over.

"We have to continue to progress and work, it's the only way we know at Juventus."

Meanwhile, Juventus remain on track to match the record 102 points achieved in 2014 under Antonio Conte, who won three titles before Allegri took over.