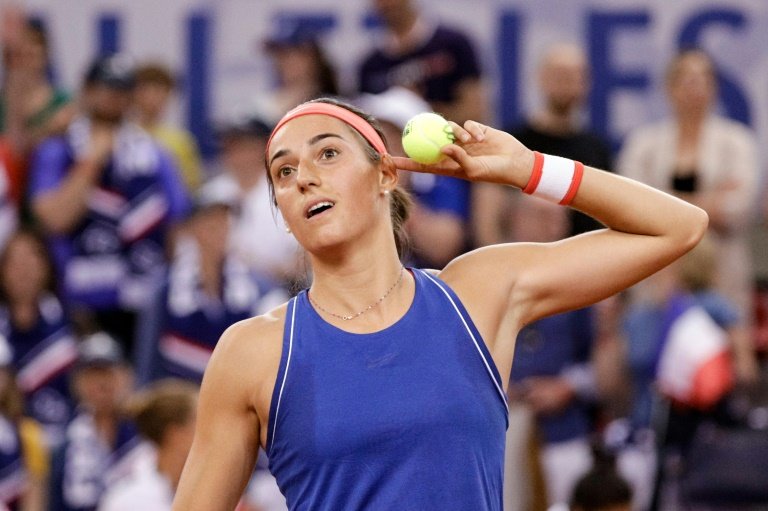 Simona Halep's dream of adding a maiden Fed Cup title to her Roland Garros breakthrough triumph was on a knife-edge Saturday as Romania and France ended the opening day of their semi-final locked at 1-1.

French number one Caroline Garcia, the world number 21, then made a point of cupping her ear to the Romanian fans after easing to a 6-3, 6-3 win over 30th-ranked Mihaela Buzarnescu as the opening day ended all square.

"I have won a Grand Slam, been world number one and now this is the next goal," Halep told fedcup.com after her eighth successive win in the tournament which last saw Romania make the final in 1973.

"It was hard to control my emotions but here in this arena, there are so many Romanians that I felt we were playing at home.

"They were louder than the French and the energy they gave us was amazing."

French captain Julien Benneteau took a gamble on Mladenovic, who reached the top 10 in late 2017 but had won only 24 of her last 70 matches to slip to 66 in the world.

Mladenovic had won three of her five encounters with Halep but on Saturday struggled in her service games and did not have the tools to stop the Romanian steamroller.

Garcia then claimed a third win in three singles rubbers since she returned from a two-year exile after falling out with her Fed Cup teammates.

Buzarnescu was unable to ride the wave of Romanian support and remains without a singles win in the Fed Cup in seven years.

In the other semi-final in Brisbane, Australia and Belarus also shared the spoils with world number nine Ashleigh Barty sweeping past Victoria Azarenka after Aryna Sabalenka had ground down veteran Samantha Stosur.

While Belarus are bidding to reach the final for the second time in three attempts, after being beaten by the United States in 2017, Australia are targeting their first decider in 26 years.

It's been an even longer wait between titles, with the last of Australia's seven victories coming in 1974.

"I'm so proud of the level of tennis the girls put on today," said Australia captain Alicia Molik.

"It's a great position we're in and we are prepared for a fifth rubber if necessary."

An ice cool Barty, who has rocketed through the ranks, breaking into the top 10 with her win at the Miami Open this month, proved too much for tour doubles partner Azarenka at the Pat Rafter Arena, winning 7-6 (7/2), 6-3.

It hauled Australia back into the tie after world number 10 Sabalenka toiled for 2hrs 47mins to battle past former US Open champion Stosur 7-5, 5-7, 6-3 in the opening rubber.