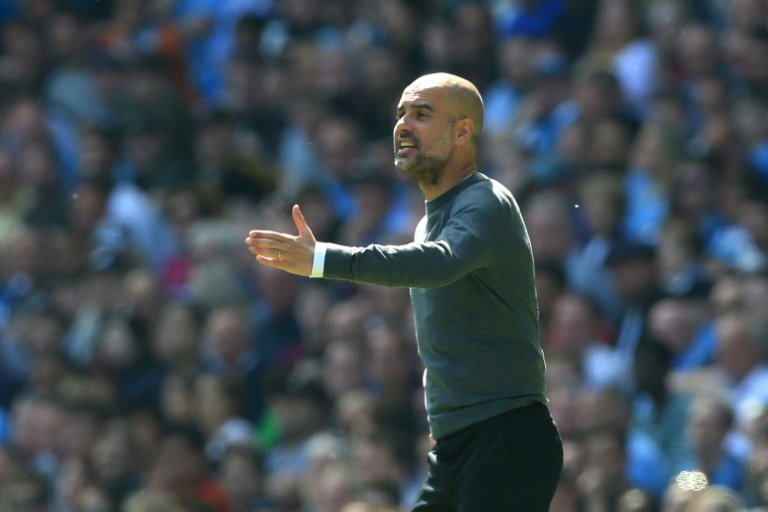 Pep Guardiola hailed his "incredible" Manchester City stars as they kept control of the Premier League title race with a tense 1-0 win against Tottenham on Saturday.

Guardiola's side are one point clear of second placed Liverpool after Phil Foden's early goal exacted a measure of revenge for City's Champions League quarter-final exit against Tottenham on Wednesday.

Liverpool can regain pole position if they win at struggling Cardiff on Sunday, but City have won their last 10 league matches to keep the destiny of the title in their own hands because the champions hold a game in hand on Jurgen Klopp's men.

"It was very important for the race for the Premier League. We know we cannot drop points. It was tight, Tottenham had more chances than the previous two games," Guardiola said.

"We have been playing for the Premier League every three days for 10 months, you can feel the pressure.

"The title is still in our hands. We are fighting until the end."

Guardiola was indebted to City goalkeeper Ederson for a series of fine saves as the champions gave a nervous display at the Etihad Stadium.

And the City manager admitted it had been hard for his players to recover from their stunning Champions League loss to Tottenham midweek, a result that ended their bid to win an unprecedented quadruple.

"We could have lost the Premier League today – after Wednesday it was really tough. As a footballer, I could not have done what my players have done today," Guardiola said.

"I give more credit to my players for this game more than any other game this season. We came back with this heat, the effort of the players was incredible.

"Twenty four months doing that, when you have 100 points and 86 now. After what we have done last season, being in the final of the FA Cup, the team was incredible this season and that's why they don't have to show me their character."

Guardiola hopes the pain of City's Champions League exit will push them to make amends by winning the Premier League and the FA Cup final against Watford to complete a treble.

"I've told my players that if it still hurts then it's good. Those 10 seconds of joy and happiness to devastation," he said.

"That kind of experience has given us emotions we wouldn't have had. Even if we don't do it, we've been on a remarkable run.

"We are fighting with the best Liverpool ever, one of the best teams I've seen in my whole life. If we win, we'll be so happy."

Third placed Tottenham's top four push could be seriously damaged by this loss if Arsenal, Chelsea and Manchester United win their matches on Sunday and Monday.

They could have had a penalty when City defender Kyle Walker appeared to handle in the area and boss Mauricio Pochettino said: "I think it was a clear handball but I accept the decision not to give a penalty."

Pochettino was pleased with Tottenham's performance, saying: "I'm not frustrated. It was an even game and we deserved more, at least a draw.

"The man-of-the-match was Ederson but in football this sometimes happens. I'm so happy with the performance in very difficult circumstances.

"We are working so hard. It will be tough (to get in the top four) because we are fighting with big teams."