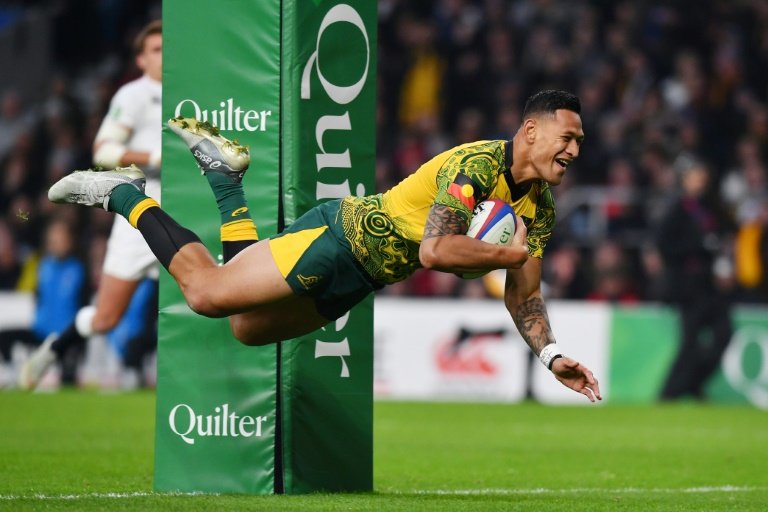 (FILES) In this file photo taken on November 24, 2018 Australia's full-back Israel Folau scores a try during the international rugby union test match between England and Australia at Twickenham stadium in south-west London. Israel Folau has requested a code of conduct hearing, Rugby Australia said on April 17, 2019 after the governing body moved to sack the star Wallabies fullback over anti-gay comments. / © AFP/File

Wallabies fullback Israel Folau on Wednesday formally challenged Rugby Australia's decision to sack him over anti-gay social media posts, thrusting the sport into further turmoil ahead of the World Cup.

The latest showdown with the devoutly religious 30-year-old -- who last year was embroiled in a similar row -- came after he posted on his Instagram account that "Hell awaits" homosexuals.

After a fruitless meeting with the player on Friday, the governing body declared Folau in breach of the sport's code of conduct and said he would be sacked unless he referred the case to a formal hearing, which he did on Wednesday.

The hearing, before representatives of Rugby Australia, the professional players association and an independent figure, is likely to be delayed by a series of public holidays over the next two weeks, extending the headache for the sport's leaders in Australia.

Folau, Super Rugby's all-time top try scorer, had been expected to play a crucial role for the Wallabies at the World Cup beginning in September in Japan, after Rugby Australia signed him to a Aus$4 million (US$2.9 million) four-year contract in February.

But following Folau's latest comments, Rugby Australia made it clear his presence in the sport was no longer tenable, while Wallabies coach Michael Cheika declared that he would not pick the player, who just two weeks ago became the leading try scorer in Super Rugby.

Rugby Australia CEO Raelene Castle, who on Wednesday acknowledged Folau's hearing request was "not an unexpected outcome", had last year come under fire for allowing the player to escape sanctions for earlier anti-gay posts.

Castle and Rugby Australia's processes were again questioned Wednesday after The Daily Telegraph reported that Folau's contract had no specific clause about social media use and speculated it could be used as a defence against his sacking.

"At the end of the day, either Israel Folau will stay standing or Raelene Castle will stay standing," former Wallabies forward Peter FitzSimons, who had called for him to be fired, said told commercial television broadcaster Nine on Wednesday.

The three-person tribunal could choose to back Rugby Australia's decision, rule that Folau did not breach the code of conduct, or issue him with a suspension that could see him return to the game.

That would force Rugby Australia to decide whether to tear up his lucrative contract, just five months out from the World Cup.

Beaten in the 2015 World Cup final by New Zealand, Australia are coming off their worst season in decades and have fallen to number six in the world, with few giving them much chance of lifting the silverware in Japan.

Folau -- who has played at an elite level in three different football codes -- had said in February that playing in the tournament was a key reason why he had re-signed with the Wallabies and Waratahs.

On Sunday he struck a different tone when he told the Sydney Morning Herald that he was ready for life without rugby, saying, "I live for God now".

"Whatever His will is, whether that's to continue playing or not, I'm more than happy to do what He wants me to do," Folau said.

Rugby league, the sport in which Folau started his career, is also turning its back on him. Australian Rugby League Commission chairman Peter Beattie said last week he had failed the sport's character test and would not get a contract.

National Rugby League stars Benji Marshall and James Graham echoed similar views, telling Fox Sports they could not see a way for the controversial player to return to their sport.

"I really can't see him being allowed to play rugby league for what he said," Graham said. "Reading what he said after it, there's no apology, I just can't see a way back for him and I think that's quite sad to be honest with you."