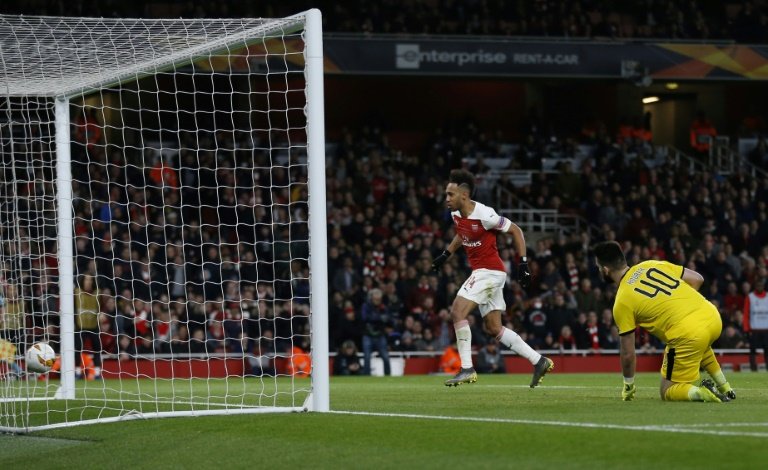 Arsenal completed a clean sweep of six English sides through to European quarter-finals by overturning a 3-1 first-leg deficit to beat Rennes 3-0 and progress to the Europa League last eight at the Emirates on Thursday.

Winning the Europa League would offer Arsenal the safety net of Champions League qualification should they miss out on a tight battle for a top-four finish in the Premier League.

But Gunners boss Unai Emery, who won the Europa League three times as Sevilla coach, also wants the glory of a trophy in his first season in charge.

Rennes had never before reached the last 16 of a major European competition and the scale of the tie for the French side was evidenced by the huge travelling support they enjoyed.

However, rather than be inspired, Julien Stephan's side seemed intimidated by their surroundings early on to concede twice inside 15 minutes.

Arsenal quickly had the early goal they sought to get back in the tie as Aaron Ramsey's low cross was swept home by Aubameyang.

The French-born Gabon international was also involved in Arsenal's second 10 minutes later, although Rennes were right to feel aggrieved that the goal was allowed to stand.

Aubameyang appeared to be clearly offside from Ramsey's pass with Arsenal's Mesut Ozil appearing to turn his back to the play expecting a flag.

However, it was not forthcoming and with VAR not in operation in the Europa League unlike the more lucrative Champions League, Maitland-Niles's downward header from Aubameyang's cross was allowed to stand.

"The second goal was clearly offside," said a frustrated Stephan.

"There was no need for the VAR to see the offside. VAR does not settle everything.

"Nothing was in the way of the assistant referee, who took much less time to raise his flag in the second half (when Rennes were attacking)."

Arsenal, though, then sat on their lead rather than building on it and could easily have paid for that approach after the break.

Petr Cech, in what could have been the Czech great's last game before retiring at the end of the season had Arsenal not progressed, turned M'Baye Niang's shot from outside the area onto the post.

Rennes were again unhappy with the Latvian officiating team when Alexandre Lacazette escaped a second yellow card before the French international was replaced by Alex Iwobi.

But 18 minutes from time, Arsenal had a cushion when Sead Kolasinac's wonderful low cross left Aubameyang with a simple task to tap home his 22nd goal of the season and celebrated by pulling on a Black Panther mask.

Aubameyang needed it back to hide his embarrassment soon after as he missed two glorious chances in the space of 60 seconds to seal his hat-trick.

"I missed two chances to close the game but the most important thing is that we won and everybody is happy and proud," said Aubameyang.

"I needed a mask which represents me and that's the Black Panther. In Gabon we call the national team the Panthers."

But Aubameyang's blushes were spared as Arsenal held out to continue the Premier League's resurgence and leave France without a single representative in the quarter-finals of either European competition.