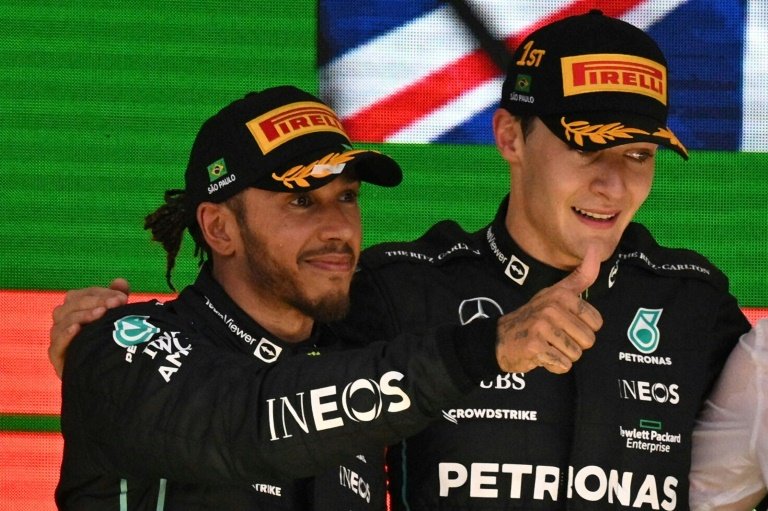 Lewis Hamilton returns to the Abu Dhabi Grand Prix this weekend 11 months on from one of the most rancorous days in Formula One history insisting he has put the past behind him.

His bid for an unprecedented eighth drivers’ world title at the Yas Marina circuit last December was thwarted by a combination of incorrect decisions by race officials, wretched bad luck and the opportunism of Max Verstappen.

As a result, while his Mercedes team triumphed in the constructors’ title race for an eighth consecutive season, he was left to digest the outcome of a sporting injustice which has reverberated ever since.

But Hamilton, who will be 38 in January, and whose act of congratulating his Dutch rival in the immediate aftermath of that bitter defeat concealed a profound disappointment, has remained stoical.

As Red Bull and Verstappen romped to glory in both the teams’ and drivers’ championships this year, while Mercedes grappled to understand and develop a stubbornly temperamental car, he became entirely a team man.

"I am very much here in the present," he said, ahead of this weekend’s season-finale.

"I am not arriving here thinking of the past at all, not one bit. I am focussed. I’m not sure if our car will work well here this weekend, but if there is a chance, we’ll go for it."

As more unverified allegations on Wednesday added fuel to a simmering dispute between Verstappen and his Red Bull team-mate Sergio Perez, whose heroic defensive drive last year helped enable the Dutchman’s triumph, the 'silver arrows' occupied a position of unity.

"For me, our success in Brazil, the one-two last Sunday, is all down to the huge effort of our team’s workforce in the UK," said Hamilton.

"They have been so determined all year."

Sunday’s race will not have the high stakes of 2021, but for Hamilton it represents a last chance to keep alive his record of winning at least once in every season of his record-breaking Formula One career.

He has a record total of 103 wins to his name, including five at the Yas Marina track where Verstappen has won the last two contests, but such statistics are not his or Mercedes’ priority.

“Lewis doesn’t need us to give him any prioritisation and nor would he ever want that,” said team boss Toto Wolff.

As Hamilton is lauded and Russell praised, Verstappen faces scrutiny following his refusal to obey team orders and assist Perez last Sunday at Interlagos in a manner that brought widespread criticism on social media.

Perez, with an icy undertone, said Verstappen had “showed who he really is” while the two-time champion declined to explain his motives.

After an emergency meeting, Red Bull said the pair had made up and Verstappen would assist Perez this weekend, as he strives to finish second in the title race and give Red Bull a one-two season finish.

Verstappen will seek a record-extending 15th win in a single season, but appeared rattled in Brazil where he finished sixth and was blamed for a reckless collision with Hamilton – and Ferrari out-performed Red Bull to follow the two Mercedes home.

On a weekend of several decisive showdowns, two-time champion Fernando Alonso will bid to sign off with a flourish for Alpine, who hope to finish fourth in the constructors’, before he moves to Aston Martin.

They lead McLaren, who suffered a pointless double retirement in Brazil by 19 points so look assured of taking the millions of dollars’ prize money on offer.

Four-time champion Sebastian Vettel, 35, will also say farewell, not only to Aston Martin, but to F1 and back at the circuit where he won his first title in 2010.

"I am sure this race will bring back happy memories of the last 15 years,” he said. “And I want to go out on a high.”