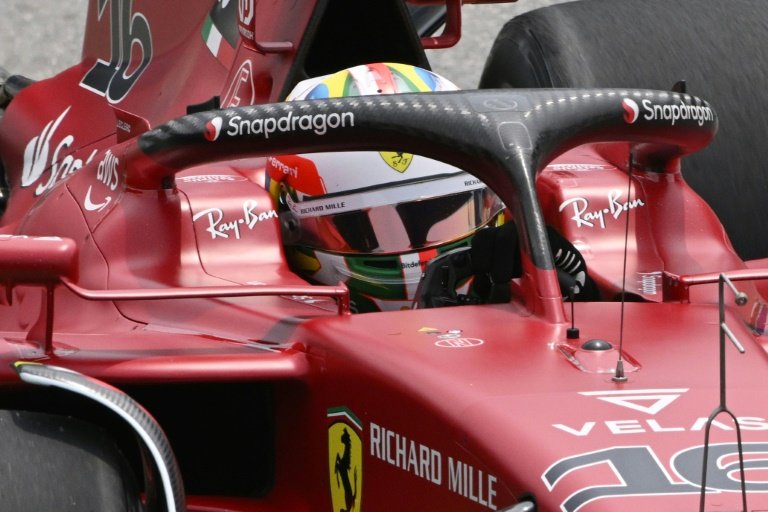 The Mexican clocked a best lap of one minute and 11.853 seconds to outpace his Monegasque rival by 0.004 seconds in a at Interlagos, where the weekend includes a sprint race on Saturday.

Two-time world champion Max Verstappen was third in his Red Bull ahead of Carlos Sainz in the second Ferrari, seven-time champion Lewis Hamilton and his Mercedes team-mate George Russell.

The top six were separated by only two-tenths of a second.

Four-time champion Sebastian Vettel, in his penultimate Grand Prix before retiring, was seventh for Aston Martin ahead of fellow-German and protégé Mick Schumacher, who is fighting to keep his seat with Haas next year.

Valtteri Bottas was ninth for Alfa Romeo and Pierre Gasly 10th for Alpha Tauri in a frantic one hour’s action as the teams worked intensively to find a set-up for their cars ahead of qualifying later Friday.

On a warm day with an air temperature of 24 degrees Celsius, and the track at 46 degrees, the session began with a flurry of cars on track seeking to take advantage of the only session before qualifying.

Esteban Ocon was the initial pace-setter ahead of the newly-moustachioed Valtteri Bottas. Verstappen was soon in action and ran off at Turn Four, the scene of his controversial defensive move against Hamilton last year, taking to the run-off area to recover.

Almost immediately, Perez went top before the world champion, on his next lap, took command, Bottas splitting the two Red Bulls with some aplomb. The Finn, a former pole sitter at Interlagos in 2017 and 2021, clearly relished the conditions and went top after 10 minutes.

Verstappen, stirred, if not shaken, responded to regain the initiative as Ferrari scrambled to keep pace, Sainz grumbling at Norris for hogging the middle of the track on a slow lap, a move the Spaniard described as ‘super dangerous’.

Sainz’s hopes for the race had already been hit by news that he faced a grid penalty after Ferrari fitted a sixth engine to his car, automatically taking a five-place demotion.

The Mercedes of Hamilton and Russell, on mediums, were fourth and seventh in the early stages, while most of their rivals ran hards – an encouraging start in their scrap with Ferrari for third place in the constructors’ championship.

Perez, sporting a sleek helmet to promote the Black Panther movie, regained top spot, on softs, after half an hour’s action ahead of the two Haas cars before Verstappen, complaining of understeer, went second, just 0.008 seconds adrift of the Mexican.

The unpredictable lapping continued with Bottas and Alonso both slotting into the top three before Leclerc improved to third with 14 minutes remaining. Russell and Sainz also found more pace in the closing minutes as Hamilton complained that his car ‘feels like the rear is just floating around’.

The seven-time champion and newly-adopted citizen of Brazil had been given a rapturous reception at the start as he began his bid for a fourth Interlagos victory, but found life difficult in this hour of intensity until a late lift to third and a hectic finale.