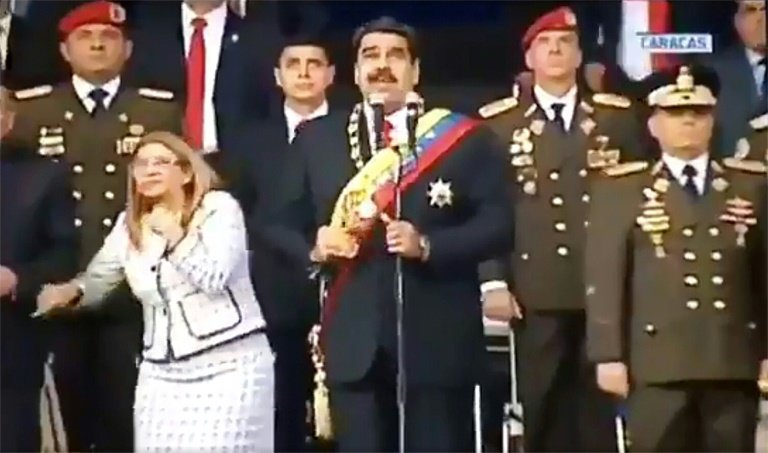 Screengrab taken from a handout video released by Venezuelan Television (VTV) showing Venezuelan President Nicolas Maduro (C), his wife Cilia Flores (L) and military authorities reacting to a drone attack during a ceremony to celebrate the 81st anniversary of the National Guard in Caracas in August 2018 / © VENEZUELAN TELEVISION (VTV)/AFP

Maria Delgado Tabosky, retired army major Juan Carlos Marrufo and retired colonel Juan Francisco Rodriguez were convicted on charges of "terrorism, treason and criminal conspiracy," according to a family member of one of the accused, who asked to remain anonymous.

The criminal hearing began Thursday night and lasted into the early hours of Friday, the family member said.

He is accused by the Maduro government of financing the attack, in which two drones carrying explosives blew up near where Maduro was addressing an assembly of members of the National Guard on August 4, 2018, in Caracas.

One drone exploded in the air over guardsmen standing in formation, injuring a few of them, and the second drone crashed into an apartment building two blocks away. Neither Maduro nor his wife, who was nearby, were hurt.

Marrufo, 52, who has both Venezuelan and Italian citizenship, is married to Maria Delgado Tabosky.

The Working Group on Arbitrary Detention, a UN human rights body, has said that the arrests of Delgado Tabosky and Marrufo in 2019 were "arbitrary." The couple have been jailed for three years and eight months at the General Directorate of Military Counterintelligence.

Relatives have appealed for their transfer to a prison and requested without avail for Spain and Italy to intercede in their cases.

Another 17 people accused in the attack, among them former opposition legislator Juan Requesens, were condemned in August to prison terms of between five and 30 years.