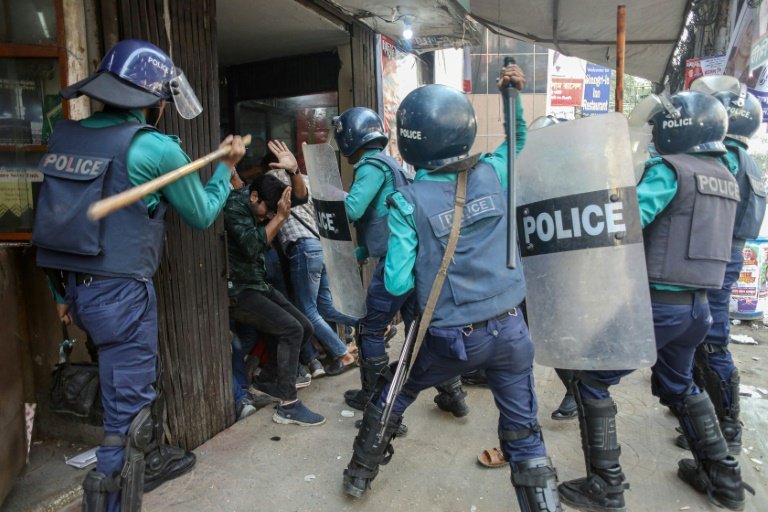 The two top leaders of Bangladesh's main opposition party were taken from their homes by police in the early hours on Friday, a day before a planned rally to call for the prime minister's resignation.

Protests sparked by power cuts and fuel price hikes have erupted across the country in recent months, demanding that Prime Minister Sheikh Hasina step down in favour of fresh elections under a caretaker government.

Friday's police action comes two days after security forces in the capital Dhaka fired rubber bullets and tear gas into a crowd of thousands of Bangladesh Nationalist Party (BNP) supporters preparing for the December 10 rally, leaving at least one dead and scores wounded.

Western governments -- along with the United Nations -- have expressed concerns over the political climate in Bangladesh, one of the fastest-growing economies in Asia.

The country was long aligned with the US, but in recent years Hasina has courted deeper ties with China, with Beijing bankrolling some of her multi-billion dollar infrastructure projects.

BNP general secretary Mirza Fakhrul Islam Alamgir and Mirza Abbas, a former minister and member of the party's top decision-making body, were taken from their homes at about 3 am on Friday (1900 GMT Thursday), Zahiruddin Swapan, head of the BNP's media wing, told AFP.

"They were plainclothes policemen. Alamgir knew their identity. They told him he was being taken away on the order of the high command," Swapan said, adding the party did not know where the two had been taken.

Police said the pair were under their custody at the "DB (Detective Branch police) compound".

"They are being questioned," Detective Branch police chief Harun ur Rashid told reporters.

Tensions have been high in the capital ahead of Saturday's planned rally, which the BNP said would draw hundreds of thousands of supporters from all over the country.

Police have insisted they will not allow a demonstration in front of the party office, which they called a "crime scene" after saying they had found Molotov cocktails at the location.

Local media said checkpoints had been set up on routes into the city to prevent opposition activists coming from the rural heartlands to join the protest.

But a defiant Alamgir on Thursday told a press briefing the party planned to push forward with the event.

BNP spokesman Swapan said police had arrested "around 2,000" party activists and supporters in a bid to scuttle the rally.

Independent observers have said the past two general elections, in which the BNP was decimated, were rigged by Hasina's government.

Addressing Wednesday's violence, Amnesty International's Yamini Mishra said the incident showed that authorities "have very little regard for the sanctity of human life and sends a chilling message that those who dare to exercise their human rights will face dire consequences".