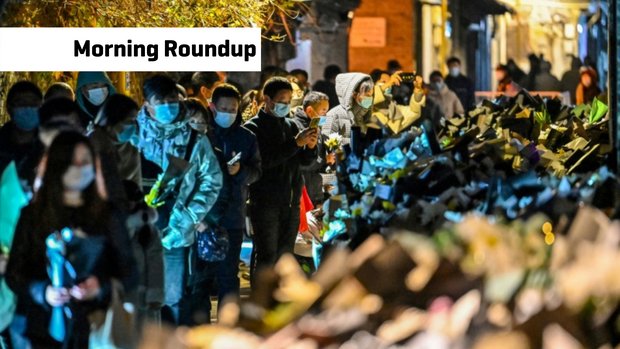 KAYL FIRE - One person died and at least ten were injured during a fire that engulfed an apartment building in Kayl early on Tuesday morning.

BIANKA TRIAL - A trial starts today of a mother, accused of the murder, homicide and assault of her one-month-old baby girl, who went missing 7 years ago. Authorities unsuccessfully looked for Bianka Bisdorff until 2019. A large-scale search operation was conducted at a pond in Linger, the place where the baby was last seen, but even though all the water was eventually pumped out, efforts remained in vain. Bianka's mother, the accused, has not spoken about the disappearance until this day.

POLICE BUDGET - In Luxembourg, massively more money will be put into the police. A parliamentary committee has agreed that the budget for next year will increase by around 67 million euros. 6 million euros over 5 years are planned for so-called body cams and 200 new police officers will start their training next year.

EU WESTERN BALKANS - Prime Minister Xavier Bettel is in Albania today, at the EU-Western Balkans Summit along with French President Macron.  EU member states are consulting with the states of the Western Balkans on a closer cooperation, or the possibility of EU membership.  Albania, as well as Bosnia-Herzegovina, Kosovo, Serbia, Montenegro and North Macedonia should get a clear perspective on joining the EU soon. In addition, the subject of migration is the order of the day, in particular the Balkan route which is increasingly being used by illegal migration traffic. CHINA ZEMIN - Sirens have sounded across China this morning, to mark the beginning of a public memorial service for the former leader Jiang Zemin, who died last week, aged 96.

INDONESIA SEX - Indonesia has passed a new law, that criminalises sex outside marriage, with the threat of imprisonment of up to a year. The law applies to Indonesian citizens and foreigners alike, including visiting tourists. Couples will no longer be allowed to live together before marriage.

KIRSTIE ALLEY DIES - The American actor Kirstie Alley has died of cancer at the age of 71. She rose to fame when she played Rebecca Howe in the sitcom ‘Cheers’, for which she received an Emmy award and a Golden Globe.

WORLD CUP - Brazil have eased into the quarter finals after beating South Korea 4-1. They will face Croatia on Friday afternoon, who got through yesterday in a penalty shootout against Japan. Today are the last knock out games – Spain will face Morocco at 4 o’clock and Portugal meets Switzerland at 8pm our time.

Alas, St Nicholas' Day will grace us with grey, overcast skies, with a hint of drizzle. After freezing conditions overnight, the morning will be cold and grey, with a thick layer of cloud. As we head into the afternoon, parts of the country may see light drizzle. Morning temperatures will start off at 0 to 2°C, rising slightly to 2-4°C in the afternoon.