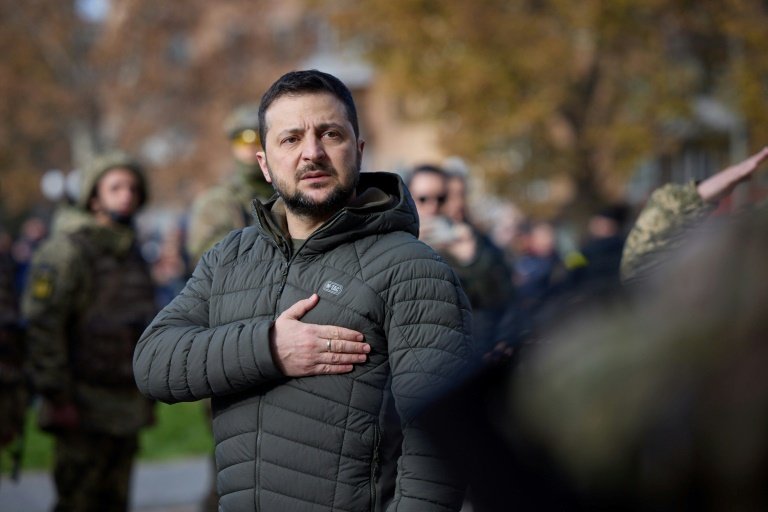 Dark circles under his eyes, his beard closely cropped and dressed ubiquitously in khaki, President Volodymyr Zelensky is the face of Ukraine's determination to expel Russian troops.

War has proved transformative for the 44-year-old former comedian, catapulting him from embattled leader of a struggling European outlier to a global household name and standard-bearer of opposition to Russian leader Vladimir Putin.

Yet his larger-than-life persona and seeming popularity could not have appeared more unlikely when the world rang in 2022.

As the champagne corks popped at New Year parties, Zelensky faced growing malaise at home. The novelty of a celebrity-turned-president was fading.

The electorate was struggling with living costs, corruption and fledgling social services. They were tiring of a populist who promised his presidency would be a panacea to the country's problems. 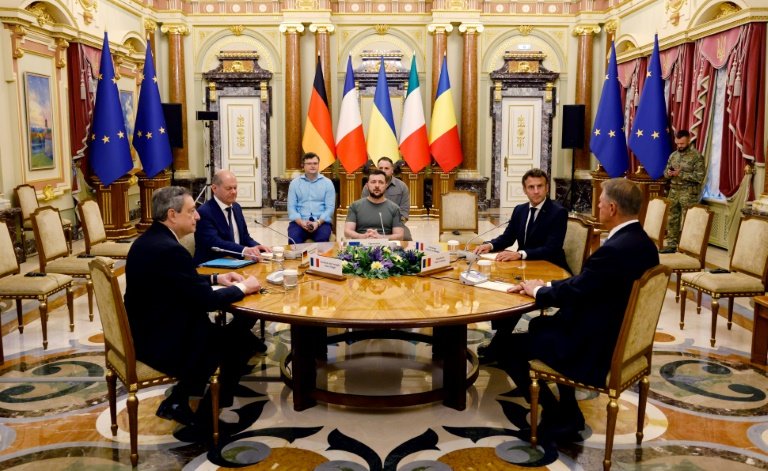 Fighting in the eastern Donbas region against Russian-backed separatists was worsening -- despite his vows to bring peace. His rivals sensed weakness. Doubts were growing in Kyiv that he was the right man for the job.

Everything changed the moment that Putin ordered his army into Ukraine on February 24, hours after a bombastic fireworks display lit up the Kremlin.

"Before the war many treated Ukraine as a failed state and Zelensky as a weak and not totally competent leader," said Volodymyr Fesenko, a Ukrainian political analyst.

"The war radically changed people's attitude towards Zelensky in a positive way. But he himself has also changed," Fesenko told AFP.

The Russian invasion was a historic moment in a region embroiled by revolutions and conflicts over the three decades since the collapse of the Soviet Union.

"There were rumours Zelensky would flee. There was a feeling he was weak, that he wouldn't be able to withstand the pressures of war and that he wasn't capable of being a war-time leader," Fesenko added. 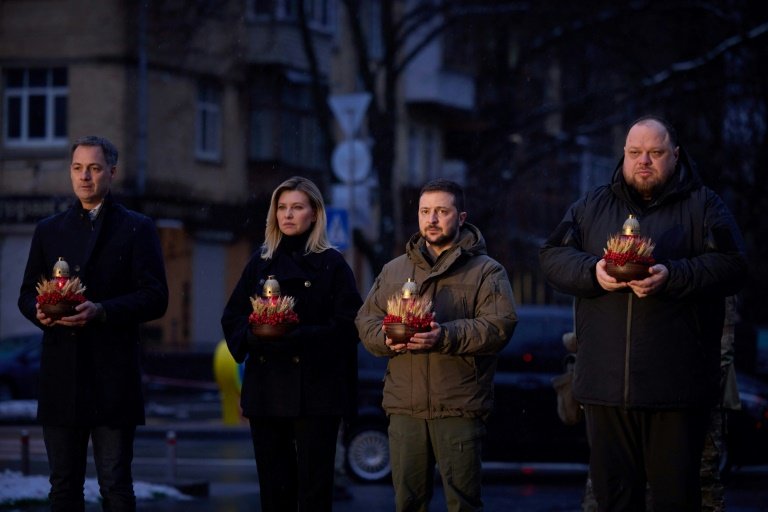 His wife, Olena Zelenska, has said their two children rarely see their father, who lives at the office / © UKRAINIAN PRESIDENTIAL PRESS SERVICE/AFP

In the war's chaotic opening hours -- with Russian tanks gunning for the capital -- he calmly posted a video filmed outside government buildings in Kyiv with his closest aides in the frame.

"We're all here, defending our independence and our country," he said, looking directly into the camera.

In the months since -- against a backdrop of credible allegations of Russian war crimes, the deaths of thousands and displacement of millions -- Zelensky has made nightly addresses to the nation, 286 in total, promising them victory.

They have reason to hope. His appeals to the West for military and financial support, at times echoing the words of Winston Churchill, have seen Ukraine first halt Russia's advance and then recapture swathes of territory.

Zelensky has made the case by presenting his country as the front line of a broader conflict and telling European leaders that Russia won't stop at Ukraine.

"Its ambitions are focused on the vast space from Warsaw to Sofia, from Prague to Tallinn," he told Czech lawmakers in June.

Zelensky was born in 1978 in the southern industrial city of Kryviy Rig in the heart of a mainly Russian-speaking region.

A year after Putin annexed the Crimean peninsula from Ukraine in 2014 and threw Russian military weight behind the separatists, Zelensky the actor took the lead part in a television show that propelled him to national stardom.

"Servant of the People" sees a naive and foul-mouthed history teacher become president after his rant to a colleague against corruption goes viral. 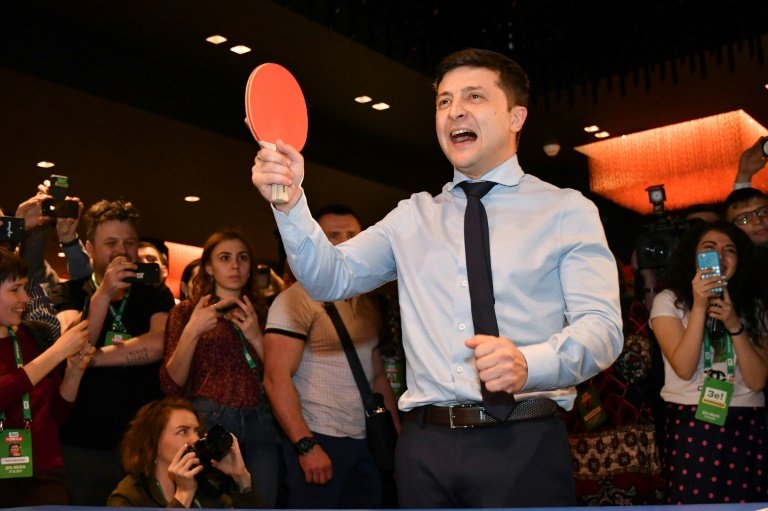 Zelensky sailed to victory in 2019 elections with a showman's campaign and as 'an ordinary guy, come to break the system' / © AFP

After announcing a real bid for office, Zelensky sailed to victory in 2019 elections with a showman's campaign and as "an ordinary guy, come to break the system," dislodging the same businessman incumbent he had voted for years earlier.

Like then, Zelensky's background as a performer plays in his favour, said Sergiy Leshchenko, a former journalist and Ukrainian politician.

"He doesn't use politically correct or diplomatic language. He says bluntly what Ukraine needs to survive in the war," Leshchenko told AFP.

After Russian forces were accused in September of bombarding civilians in Zaporizhzhia, Zelensky called the forces responsible "bloodthirsty scum" and Russia a "terrorist state".

Moscow describes Zelensky variously as a neo-Nazi, the leader of a country responsible for genocide and a drug addict.

"The Orthodox church should proclaim that Zelensky is officially the coming of the Antichrist," pro-Kremlin political pundit Arayak Stepanian said recently on state TV.

His wife, Olena Zelenska, has said that their two children rarely see their father, who lives at the office.

Yet only rarely does the public glimpse his fatigue.

One iconic moment came in April when he visited Bucha, a town near Kyiv where Ukrainians dressed in civilian clothes were found shot dead and with their hands tied behind their backs after Russia retreated.

The images show him crestfallen, with dark circles under his eyes, his face drawn and despondent -- and at least in this image -- lost for words.

After Bucha, Zelensky announced a policy reversal that Kyiv would no longer negotiate with Russia so long as Putin, whom he met face-to-face in 2019, was in power or as long as Russian troops remained in Ukraine. 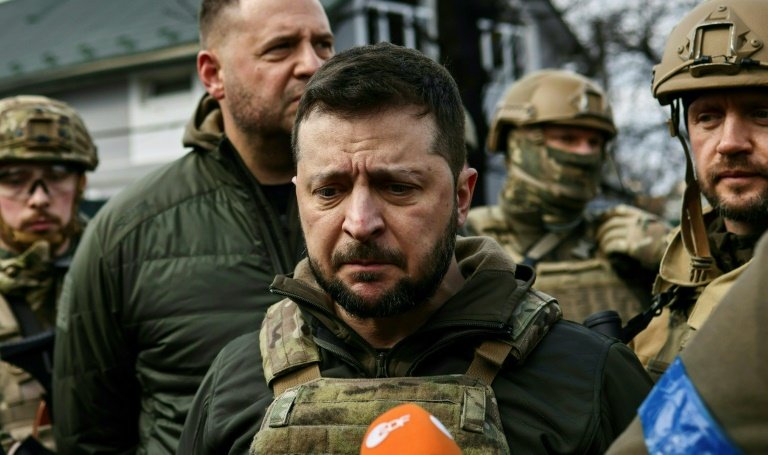 Only rarely does the public glimpse his fatigue but in a visit to Bucha in April, images showed Zelensky crestfallen / © AFP/File

This all-in approach has won Zelensky accolades but it also charts for Ukraine a long course ahead in a war of attrition that has no end in sight.

"He has to keep up the energy for resistance in Ukrainian society and maintain and even strengthen support from the West," Fesenko, the analyst, told AFP.