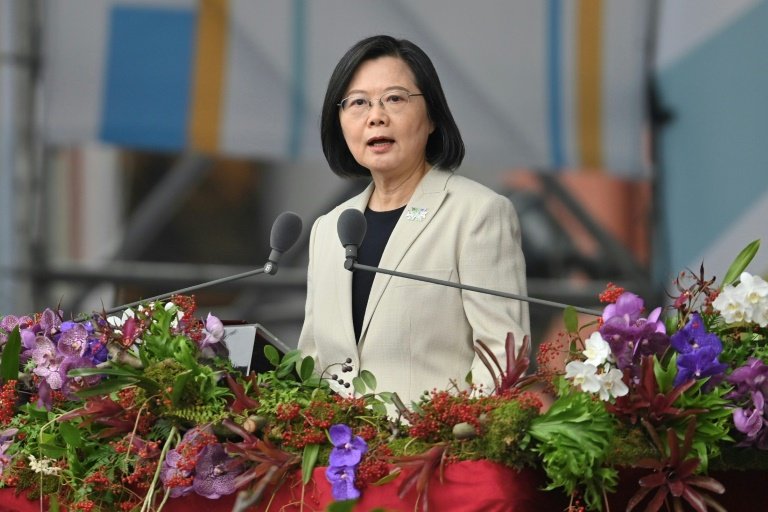 During a five-day visit to Taiwan, a delegation of Australian MPs is scheduled to meet the island's President Tsai Ing-wen, seen here in October 2022 / © AFP/File

A group of Australian MPs will leave Sunday for a five-day visit to Taiwan, a spokesman for one of the politicians said Saturday, risking China's ire just as Beijing-Canberra relations appeared to be thawing.

The bipartisan trip will be the first such Taiwan visit in more than three years, a period marked by a long disruption to air travel caused by the Covid-19 pandemic.

Details of the visit were confirmed to AFP by a spokesman for Scott Buchholz, a conservative MP who is in the delegation.

Prime Minister Anthony Albanese sought to play down the mission's significance after it was first reported by the Weekend Australian newspaper.

"There have been backbench visits to Taiwan for a long time. This is another one. This isn't a government visit," he told reporters.

Albanese said both major Australian political parties supported the "One China" policy, which recognises Beijing, not Taipei, while backing the status quo on the self-ruled island.

Asked about the aims of the trip, he said: "I have no idea. I'm not going. You should ask them."

The delegation of six MPs includes members of the centre-left ruling Labor Party as well as the conservative opposition Liberal Party and its ally, the National Party.

Former deputy prime minister Barnaby Joyce, of the National Party, is part of the group, the spokesman for Buchholz said.

The MPs were scheduled to meet Taiwan's President Tsai Ing-wen, Foreign Minister Joseph Wu and other senior officials, according to the Weekend Australian.

The visit, backed by Taiwan, aimed to convey a desire for peace in the Asia-Pacific region, it said.

Plans for the trip had been kept quiet to prevent China from lobbying against it, the report said.

Chinese President Xi Jinping called for better relations with Australia when he met Albanese in Indonesia last month for the first formal summit between the two countries in years.

It was seen as an opening for improved ties between the major trading partners.

China has been angered by Australia's willingness to legislate against overseas influence operations, its ban on Huawei from 5G contracts and its call for an independent investigation into the origins of the coronavirus pandemic.

China, which claims Taiwan as part of its territory, bristles at foreign lawmakers' visits to the island, describing them as interference in its domestic affairs.

It notably retaliated against then-US House speaker Nancy Pelosi's visit to Taiwan in August by staging military drills of unprecedented scale around the island.