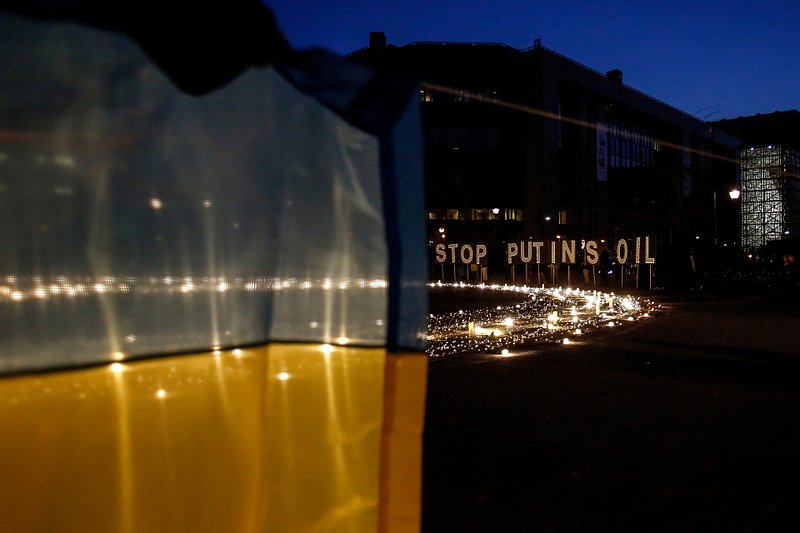 A demonstrator holds an Ukrainian flag in front of a sign reading "Stop Putin's oil" during a vigil for Ukraine near the European Union (EU) headquarters in Brussels, on March 22, 2022. / © AFP

The European Union will join the G7 powers in imposing a 60-dollar-per-barrel price cap on Russian oil, the Polish ambassador to the EU said Friday.

Poland had delayed approving the adoption of the plan while it pushed for a lower price ceiling and tough new sanctions to punish Russia for its war against Ukraine and starve its military of funds.

"We can formally agree to the decision," Poland's EU ambassador Andrzej Sados said, explaining that Poland's fellow EU members had agreed to push forward with a new ninth round of sanctions against Russia.

"We're working on the next package of sanctions, which will be painful and expensive for Russia," Sados told reporters.

The European Union presidency, currently held by the Czech Republic, confirmed that member state ambassadors had reached agreement on the price cap and that the decision would enter into force when published in the EU official journal this weekend.

The oil price cap will run alongside the EU's ban on imports of Russian oil, which comes into effect on Monday, and member states hope it will be the most damaging hit yet against the industry fuelling President Vladimir Putin's Russian war machine.

The Polish envoy told reporters that Warsaw was reassured that the European Union had taken on board suggestions from Poland and the Baltic States for a tough new ninth round of sanctions.

He did not say which of the ideas might feature in the package that the European Commission is drawing up, but a discussion paper circulated last month called for Gazprombank, which facilitates payments for Russian energy exports, to be kicked off the SWIFT international payments system.

It also proposed bans on the export of a wide-range of consumer technology that could be pressed into use by the Russians and a ban on the importation of Russian diamonds.

Monday's oil embargo will prevent shipments of Russian crude by tanker vessel to the EU, which accounts for two thirds of imports, the rest arriving by pipeline.

Energy experts like Phuc-Vinh Nguyen of the Delors Institute think tank estimate that Russia has earned 67 billion euros ($71 billion) selling oil to EU clients since its February invasion of Ukraine.

This alone is greater than Russia's 60-billion-euro defence budget before the war and dwarfs the financial and military aid spent by EU states to support Kyiv's pro-Western government.

From Monday, tankers will no longer be permitted to bring Russian crude to Europe -- and the price cap is designed to make it harder to bypass the sanctions by selling beyond the EU.

China and India, for example, will still be able to import Russian oil, but under the proposed plan European insurers would be banned from covering tankers that carry oil trading at prices above the $60 ceiling.

Under the European plan, which will be coordinated with the United States, the G7 and other western allies, if the market price of Russian oil falls below $60 then the cap will be cut until it is five percent lower than the market.

Level of the cap

The price of Urals Crude, the main variety sold by Russia, is volatile but it was trading at around $65 per barrel as EU ambassadors met to discuss the level of the cap.

But Poland, a strong supporter of its neighbour Ukraine in the battle against the Kremlin's forces, had earlier been holding out for a lower sum, reportedly closer to just $30 a barrel, but Sados said that the market price was expected to rise and that $60 was now a reasonable starting point.

Moscow has previously warned that it will not export oil to countries respecting a price cap.

Last week, Putin had warned that any attempt by the West to cap the price of Russian oil would have "grave consequences" for world markets.

"We will not comment until this news... is made official," said Russian presidential spokesman Dmitry Peskov. "We are awaiting an official announcement."

With Germany and Poland having decided to stop deliveries via a pipeline by the end of the year, Russian exports to the union will be cut by more than 90 percent, the Europeans say.

For Phuc-Vinh Nguyen, the proposed instrument raises many questions.

"An oil price ceiling has never been seen. We are in the unknown," he said, stressing that the reaction of OPEC producing countries, or big buyers like India or China will be crucial.

According to the analyst, a cap -- even at a high tariff -- would send "a strong political signal" to Putin, because, once in place, this mechanism could be tightened.

Oil ministers from the OPEC+ oil producers' group will meet in Vienna on Sunday.