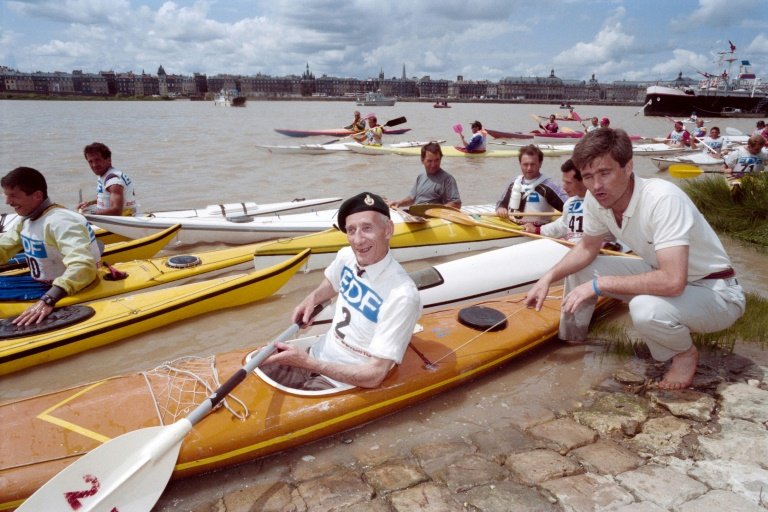 William Sparks (C), one of the only two survivors of the raid, returned for a visit in 1992 / © AFP/File

France marks next week the 80th anniversary of a daring World War II raid by British Royal Marines, who slipped past German patrols up the Gironde estuary to mine crucial supply ships.

Dubbed "The Cockleshell Heroes" in a 1950s book and film after their tiny canvas-and-plywood boats, the 10-man infiltration team set off on "Operation Frankton" on December 7, 1942.

Faces blackened against detection, they slipped from a submarine near the entrance to the estuary for a 100-kilometre (60-mile) moonlight paddle trek that would take several nights to complete, resting on the banks by day.

Their mission was to sink ships moored in the port of Bordeaux that had been running arms and raw materials between German and its ally Japan.

That objective complete, the commandos would then have to make their own way another 160 kilometres overland to a meeting with resistance fighters, who would smuggle them into Vichy France.

Although young -- the men under the command of Major Herbert Hasler were mostly in their early 20s -- the unit scored a resounding success, blasting five ships in the early hours of December 12.

But only Hasler himself and his boat mate William Sparks made it home alive four months later, after fleeing on foot, by bicycle and on trains to Gibraltar.

- 'The Germans were everywhere' -

Six members of the team died before even they even reached the target.

Swells capsized the boat of Samuel Wallace and Robert Ewart, who were captured and shot by the Germans -- as were John MacKinnon and James Conway, taken after their boat was holed near Bordeaux.

After the attack, French informants gave up Alfred Laver and William Mills to the occupiers as they were trying to make their way home. Their names are on a war memorial in the village of Montlieu-La-Garde.

Around 20 plaques around the region recall the commando raid, says Erik Poisneau, president of the Frankton Souvenir (Frankton Memory) association.

The attack was "a physical and nautical feat" pitting the marines against the natural forces of Europe's largest estuary, Poisneau says.

Although "the Germans were everywhere", it had been "unthinkable" for them that the Allies would even attempt such a raid, he adds.

For historian Sebastien Albertelli, the mission had a "psychological, propaganda dimension" for the British. It showed that London could "strike at the heart of the enemy forces" at a time when the tide of the war had yet to clearly turn.

After placing their mines and scuttling their kayaks downstream, the exfiltration became "just as extraordinary as the mission itself," says Christophe Soulard, author of "Frankton: the Unbelievable Odyssey".

Navigating with map and compass with a few francs in their pockets, Hasler and Sparks crossed the river Charente. But while some locals welcomed them, others were hostile.

One farmer who put them up, Clodomir Pasqueraud, asked them to have the words "the chicken is tasty" broadcast on the BBC when they return -- code to let those who had helped them know they had made it back safely.

In one village, three people including a 16-year-old boy were sent to the concentration camps for helping the British commandos.

"They never came back," says Monique Babin, an expert on the operation who has become an associate member of Britain's Special Boat Service Association.

A restaurateur who put them up asked for another poultry-based BBC message -- "the two chickens have arrived" -- and both were transmitted in April 1943 after Hasler and Sparks were helped to Gibraltar by the "Marie-Claire" resistance network.

Neither man had fired a shot during the whole operation.

Known as "Blondie" for the colour of his bushy moustache, Hasler became a well-known sport sailor, launching and competing in the first solo transatlantic race.

Having joined up to avenge his brother's death in combat, Sparks became a trolleybus driver after the war, but fell on hard times and had to sell his medals at auction.