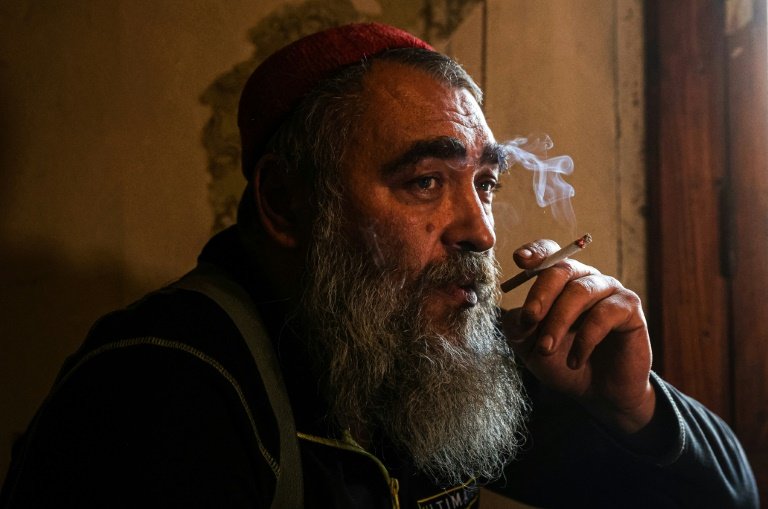 Underarmed and with limited ammunition, Volodymyr Regesha is adamant his volunteer battalion won't be joining the Ukrainian army even if it means taking their chances on the front.

For nearly eight years, the leader of "Santa's Unit" has helped bolster Ukraine's frontline in the eastern Donbas region, insisting that they have done it on their own terms.

"The motivation is simple. An enemy has come to my land. Period. No more motivation is needed," the hulking figure with a thick, greying beard told AFP.

"For us, success is signified by the fact that we do not retreat, but hold on to these positions with our teeth," Regesha said while taking gentle drags on a cigarette as salvos of Russian artillery exploded in the distance, rattling the windows of his cottage.

His phone constantly vibrated with messages arriving from the front, detailing the progress or setbacks of the latest fight.

"It will be quiet now," he said after a heavy barrage and a spate of texts. Moments later, an eerie calm settled in.

The 48-year-old has been fighting in this south-eastern stretch of Donbas since a Russian-backed separatist movement first began waging war against Kyiv in 2014.

It was then, with the Ukrainian army in disarray, that so-called volunteer battalions first took up arms to blunt the onslaught and little by little began to claw back territory lost to the insurgents.

"The appearance of volunteer battalions played a positive role," said Sergiy Zgurets, a Kyiv-based military analyst. "It was society's response to the threat that arose."

For men like Regesha, the militias offered the fastest way to the frontline, bypassing the bureaucracy and waiting periods that came with official enlistment in the Ukrainian military.

Most of the battalions were eventually incorporated into the national guard and brought under the military's chain of command, as part of an effort to professionalise the forces and weed out extremists.

Regesha first joined the Right Sector ultranationalist battalion, but later split from the group and formed his own force that he commands to this day.

However, the groups have been dogged by controversy as fears grew that the battalions had become potential breeding grounds for far-right activists to receive military training.

The existence of the battalions served as part of Russian President Vladimir Putin's pretext for invading Ukraine in February in his quest to "de-Nazify" the country.

Regesha dismissed the accusations, saying he and his fighters are simply patriots.

"If Russians love their country, this is considered loving the motherland. And when a Ukrainian loves his own country, he is called a nationalist or even a Nazi," he said.

Lacking official enlistment standards, the militia over the years has attracted a motley crew of characters imbued with outlaw bravado -- including foreign nationals, amputees and the elderly.

The commander however remains coy about the precise numbers in his group, only offering that he has "enough".

"I was not taken into the army, because I was already old," said a 71-year-old member of the group who goes by the call sign Grandpa. "That's why I joined the volunteer battalion."

While he remains formally outside of the military, Regesha said Ukraine's armed forces depend on his troops.

When the full-scale Russian invasion erupted, Regesha wanted to redeploy his fighters to defend Kyiv, but the military asked him to stay put in Donbas to help repel the Kremlin's thrust there.

"For eight years there has been war here. That's why there was no shock or panic. We were ready to punch them in the teeth," he insisted.

The arrangement is a Faustian bargain, he admitted, that allows them greater freedom in the field but also means they have more limited access to heavy weapons and much-needed ammunition.

"I'm not a man of the system," said Regesha, while pointing out that joining the chain of command comes with its own risks.

The Azov Regiment, a former volunteer battalion, came under the military's control in 2014. The group gained international notoriety in the early days of the war with their defiant last stand at a Soviet-era steel plant in Mariupol.

While their fierce resistance earned them widespread adoration in Ukraine, Regesha drew other lessons from the battle.

In May, the outnumbered and outgunned Azov fighters were ordered to surrender by the high command in Kyiv and fell into Russian hands.

In the months afterwards Azov captives began to trickle out in prisoner exchanges, with emancipated soldiers claiming they had been starved and tortured.

Regesha is sure that a similar fate, or perhaps worse, would await his group if they were to fall into Russia's hands.

"It is clear that we must not be captured, because it would be a long and painful death," he said.

"None of us can surrender... but God forbid if someday we have to make such a choice, we will fight until the very end."