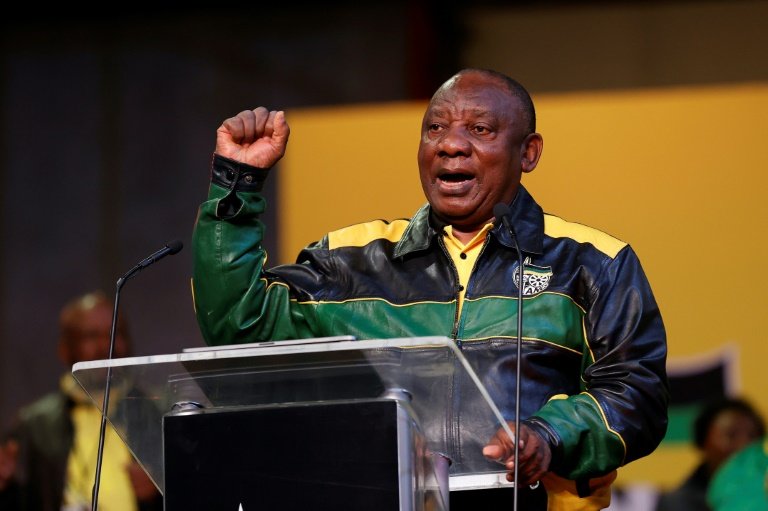 President Cyril Ramaphosa was rumoured to be close to stepping down on Thursday, but by Friday the pendulum had swung back the other way / © AFP/File

President Cyril Ramaphosa's political future hung in the balance on Friday, as South Africans wondered whether he would cling to power or resign over accusations that he sought to cover up a burglary at his farm.

On Thursday, the 70-year-old head of state was rumoured to be close to stepping down in the face of calls to quit -- but by early Friday, the pendulum seemed to have swung the other way as allies urged him to fight on.

Leaders of African National Congress (ANC), South Africa's ruler since the end of apartheid in 1994, held emergency talks as a party source said "a fierce debate" was unfolding "between those for and against the president."

The talks will resume before Monday, he said. The issue of whether Ramaphosa has "the intention to resign or not did not arise," he said. The president did not attend the talks, he added.

Ramaphosa has been under fire since June, when a former spy boss filed a complaint with police, alleging he had concealed the theft of a cash haul at his farm at Phala Phala in northeastern South Africa.

Instead of alerting the authorities, he allegedly organised for the robbers to be kidnapped and bribed into silence.

The scandal lurched dramatically into higher gear on Wednesday when an independent investigative panel, in a report to parliament, concluded that Ramaphosa had questions to answer about the money and his behaviour.

Featuring extraordinary details about hundreds of thousands of dollars stashed beneath sofa cushions, the report dealt a huge blow to Ramaphosa's bid to portray himself as graft-free after the sleaze-tainted era of Jacob Zuma.

Ramaphosa on Thursday faced a volley of demands that he should quit or be forced out by a vote of impeachment. But on Friday, there was a wave of support for him from within and outside the party.

"There's no factual and legal basis for (him to go)," Mathole Motshekga, an ANC lawmaker told AFP.

The influential head of the Anglican Church also pleaded for the president to stay on.

"No one should be above the law, but to pass final judgement on a person based on what is in effect a board of preliminary investigation, which has not made a final determination of the facts, could lead to lawlessness," Archbishop Thabo Makgoba, who succeeded Desmond Tutu, said.

In a lengthy submission to the inquiry, the president denied any wrongdoing and dismissed the accusations against him as "without any merit."

But he admitted that $580,000 in cash -- which he said was payment for buffaloes bought by a Sudanese citizen -- had been stolen from under sofa cushions at his ranch.

The three-person panel was trenchant in the questions it raised.

"Why would anyone pay such a huge sum of money in cash and thereafter leave the goods without indicating when he would come back to collect the buffaloes or leaving an address for the delivery of the animals?" it asked.

It also concluded Ramaphosa "may have committed" serious violations and misconduct in not reporting the theft directly to police and in seeking the help of his Namibian counterpart to apprehend the thieves.

Parliament is scheduled to examine the report on Tuesday.

The debate could lead to a vote on removing him from office. For this to succeed, a motion has to be supported by at least two-thirds of lawmakers.

Motshekga, though, vowed the ANC will "just reject that report and life goes on."

The scandal has come at the worst possible moment for Ramaphosa, who had looked set to secure re-election at the helm of the ANC -- a stepping stone to a second term as national president.

The ANC, which after 28 years in power is experiencing dwindling support, is due to vote in a new leadership on December 16.

Ramaphosa took office at the helm of Africa's most industrialised economy in 2018 vowing to root out corruption that had taken root across state institutions.

He now risks becoming the third ANC leader forced out since the party came to power after the end of apartheid.

The ANC forced Zuma to resign over graft in 2018, and also pushed Thabo Mbeki out of office in 2008 amidst a power tussle.