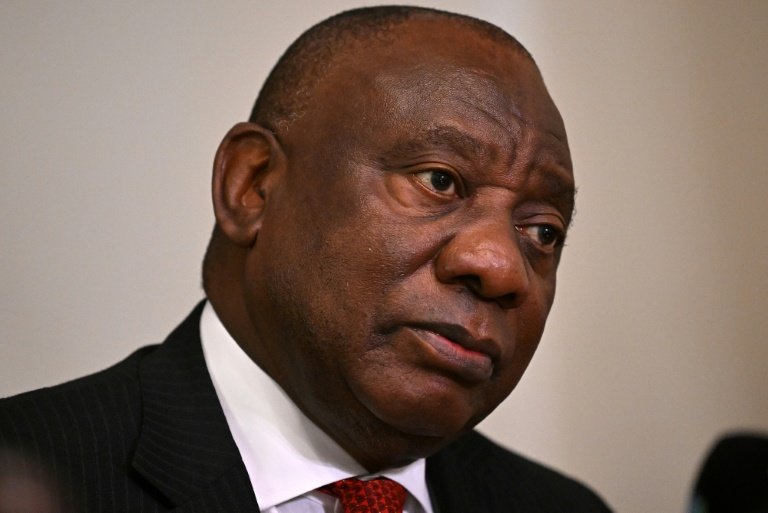 President Cyril Ramaphosa was in talks with South Africa's ruling party late Thursday as pressure mounted for him to quit or be forced from office over a cash burglary at his farm that he allegedly covered up.

Ramaphosa "is looking at a number of options and... consulting with a number of role players" in the African National Congress (ANC), presidential spokesman Vincent Magwenya told journalists.

The talks were unfolding on the eve of an emergency session of the party's decision-making body to discuss the escalating crisis.

The national currency, the rand, fell nearly three percent earlier as Ramaphosa cancelled a scheduled question-and-answer session in parliament following publication of a report into the scandal.

Opposition politicians and critics of Ramaphosa fired a volley of demands that he resign.

"The President has to step aside now and answer to the case," said senior cabinet minister Nkosazana Dlamini-Zuma, who ran unsuccessfully against Ramaphosa as ANC leader in 2017.

Ramaphosa has been under fire since June, when South Africa's former spy boss filed a complaint with the police.

It alleged Ramaphosa had hidden a burglary at his farm at Phala Phala in northeastern South Africa from the authorities.

Instead, he allegedly organised for the robbers to be kidnapped and bribed into silence.

The vast sum stashed at the farm has cast a dark shadow over Ramaphosa's bid to portray himself as graft-free after the corruption-stained era of Jacob Zuma.

A three-person inquiry on Wednesday submitted a report to parliament in which it concluded Ramaphosa "may have committed" serious violations and misconduct.

The report will be examined by parliament on December 6.

That debate could open the way to a vote on impeaching Ramaphosa -- a term that in South Africa means to remove from office.

Ramaphosa, in his submission to the panel, steadfastly denied any wrongdoing and warned of the "interest of the stability of government and that of the country."

But the scandal, complete with details of more than half-a-million dollars stashed beneath cushions at the farm, has come at the worst possible moment for him.

On December 16, he contests elections for the presidency of the ANC -- a position that also holds the key to staying on as national president.

Ramaphosa took office at the helm of Africa's most industrialised economy in 2018 on a promise to root out corruption.

He now risks becoming the third ANC leader forced out since the party came to power after the end of apartheid in 1994.

Impeachment, in South Africa, means the removal of the president.

Section 89 of the constitution empowers the National Assembly to remove a sitting president provided the vote is supported by at least two-thirds of lawmakers.

Serious violation of the constitution, serious misconduct or inability to perform the functions of office are the permitted grounds for an impeachment motion.

Ramaphosa's predecessor Zuma survived four impeachment votes until his own party, the ANC, forced him to resign over graft in 2018.

The ANC also forced Thabo Mbeki out of office in 2008 in the middle of a power struggle.

The South African public has been riveted by details from in the investigation, particularly over $580,000 in cash that was stolen from beneath sofa cushions at his ranch.

The sum was payment made by a Sudanese citizen who had bought buffaloes, Ramaphosa said.

Farm staff initially locked the money in an office safe, he said.

But a manager then decided that the "safest place" to store it would be under the cushions of a sofa inside Ramaphosa's residence at the farm, he said.

Ramaphosa told the inquiry that the accusations against him were "without any merit" and asked it not to take the matter "any further."

But the panel concluded that Ramaphosa had failed to report the theft directly to police.

He had acted in a way inconsistent with holding office and exposed himself to a conflict between his official responsibilities and his private business, it said.