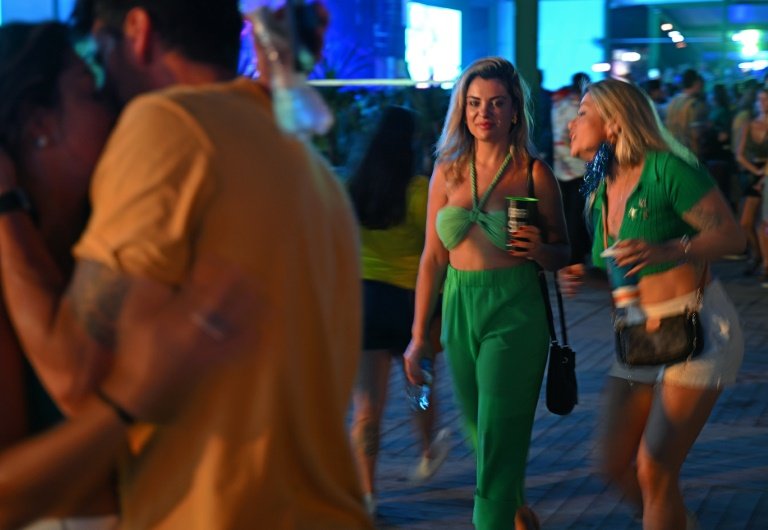 Fans of Brazil are seen after watching the live broadcast of the Qatar 2022 World Cup Group G football match between Brazil and Switzerland at a music and football broadcast festival Rio de Janeiro, Brazil, on November 28, 2022 / © AFP

In a yellow-and-green outfit with matching shoes, eye glitter and fingernails, Julia Barbosa is on her way to watch Brazil's big match in a Sao Paulo bar.

But she looks like she could be strutting her stuff on a runway modeling Brazil's latest fashion trend: World Cup style.

As the five-time champions wage their campaign to bring home their sixth world title, the 24-year-old marketing student is waging a campaign of her own.

"I'm going to have a different look for every match," Barbosa says proudly, posing for pictures in the outfit she bought for Brazil's opening match against Serbia Thursday.

Next up, she says: a bikini top and shorts in the colors of the flag, which have flooded streets, shop windows and online stores in Brazil as the football-mad nation starts its World Cup party.

The team won its first two games and has qualified for the knock- out stage of the tournament.

Some Brazilians have eschewed yellow and green in recent years, which were associated with outgoing President Jair Bolsonaro and his far-right base.

But with the World Cup now under way and Bolsonaro on his way out after losing last month's elections to leftist president-elect Luiz Inacio Lula da Silva, fans are re-embracing "Brazilcore," a streetwear fashion heavy on symbols of national pride and the yellow, green and blue of the flag.

Pop superstar Anitta and an army of influencers on social media have pushed the trend -- redefining the symbolism of yellow and green.

The trend "aims to reclaim pride in the national colors, giving all Brazilians a sense of belonging, regardless of their politics," said Katia Lamarca of the European Design Institute (IED) in Sao Paulo.

"The LGBT community deserves to wear these colors again with pride," he said with a smile in another Sao Paulo bar.

"I wanted to shine, and I want the team to shine too," she told AFP. 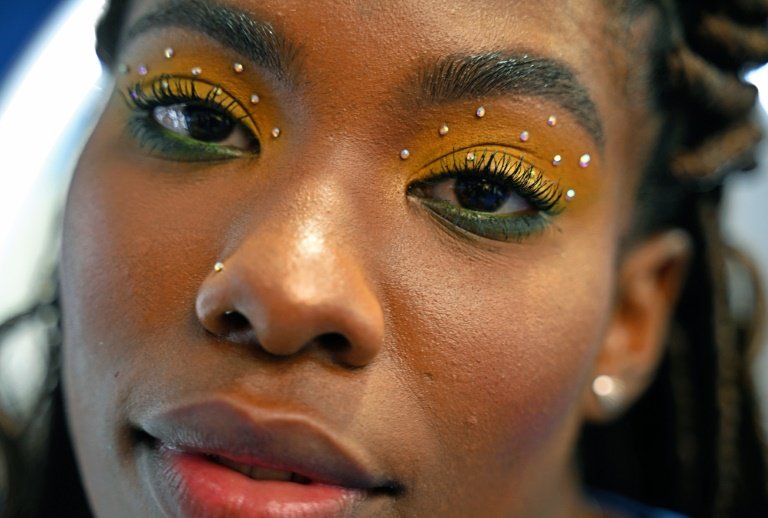 A fan of Brazil poses for a picture at a make up booth after watching the live broadcast of the Qatar 2022 World Cup Group G football match between Brazil and Switzerland at a music and football broadcast festival Rio de Janeiro, Brazil, on November 28, 2022 / © AFP

"Brazil is the country of football, and it's important for fashion to be attuned to what consumers -- who are also football fans -- want," said fashion analyst Paula Acioli.

"It has to have the right timing, be attractive and be assertive."

One top Brazilian brand, flip-flop maker Havaianas, launched a new product line ahead of the World Cup celebrating "brasilidade," or Brazilian-ness, with yellow-and-green sandals stamped with the iconic number 10 of Neymar and Pele.

"Brands know the emotional pull of an event of this magnitude," said Lamarca.

"That can translate to purchases and increase profits."

Rio de Janeiro brand Farm meanwhile launched a line including sleeveless T-shirts stamped with slang and double entendres, such as "Pra jogo," which can mean both "ready to play" and "available."

Men have not stayed on the sidelines of the World Cup fashion frenzy.

Shop windows and online stores are packed with World Cup-themed clothing for men, with options going way beyond the traditional national team jersey, and sometimes even bordering on elegant.

Almeida said the trend may be here to stay -- "especially if Brazil win the World Cup."