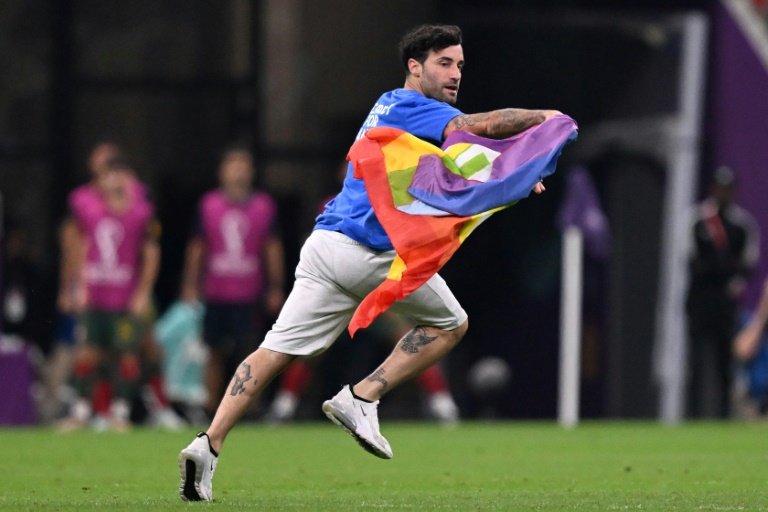 Mario Ferri, 35, who calls himself 'The Falcon', interrupted the Portugal-Uruguay game / © AFP

The Italian who ran onto the World Cup pitch wearing a T-shirt in support of Ukraine and Iranian women defended his protest Tuesday, despite being served a tournament ban.

Mario Ferri, 35, a football player with a history of similar stunts, interrupted the Portugal-Uruguay game Monday when he sprinted onto the pitch wearing a blue Superman T-shirt with "Save Ukraine" on the front and "Respect for Iranian Woman" on the back.

Ferri, who calls himself "The Falcon", also carried a rainbow-coloured flag adorned with the words PACE, meaning peace in Italian.

"I'm BACK," wrote Ferri on his Instagram page Tuesday, where he describes himself as a "modern pirate".

FIFA said Ferri's official card to access the Qatar stadiums was cancelled and that he had been banned from future World Cup matches.

Italy's foreign ministry confirmed that Ferri had been briefly detained after running onto the pitch before being released "without any further consequences".

To his 133,000 followers on Instagram, Ferri said he undertook the stunt to send "important messages", including for Iran "where I have friends who are suffering, where women are not respected".

"FIFA banned rainbow captain's armbands and human rights flags in the stands, they blocked everyone, BUT NOT ME, like a Robin Hood," he wrote.

"SAVE UKRAINE. I spent a month in the war in Kyiv as a volunteer and saw how much those people are suffering," he wrote, calling for peace in the country heading into a tenth month of fighting after Moscow's invasion in February.

He added that "breaking the rules for a good cause is never a crime".

According to the Gazzetta dello Sport newspaper, Ferri has played on teams in Jordan, India, San Marino, the Seychelles and Switzerland -- part of his desire to play on every continent.

In 2010, Ferri invaded the Club World Cup pitch in Abu Dhabi during an Inter-Mazembe game waving an AC Milan scarf.

Four years later during the World Cup in Brazil, he again sported his Superman T-shirt as he ran onto the field during a Belgium-USA game.

The T-shirt read "Save the children of the favelas," referring to slums in Brazilian cities, with "Ciro lives" underneath, in memory of Naples fan Ciro Esposito who was shot by a hooligan before the Coppa Italia final and later died.

In 2017, Ferri threw a Naples scarf in the face of Juventus player Gonzalo Higuain during a Naples-Juventus match.

"I decided to avenge the Neapolitans for Higuain's move to Juventus," he told the Corriere dello Sport newspaper.