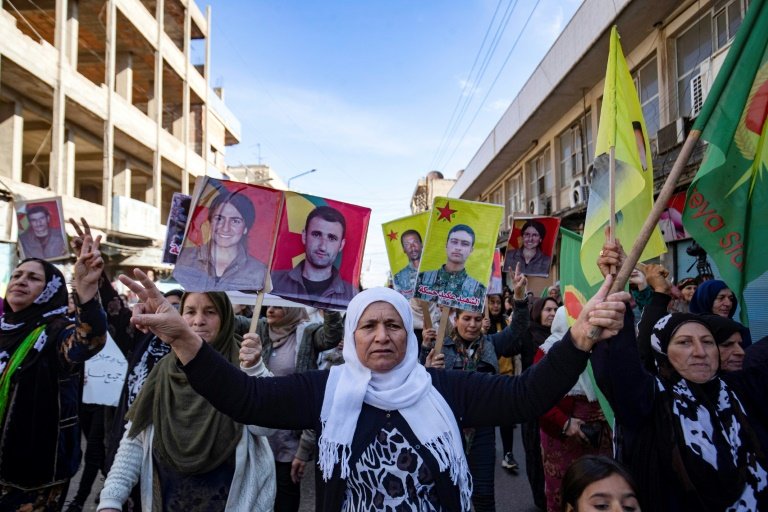 Thousands of Kurds protested on Sunday in the Syrian city of Qamishli against days of deadly Turkish cross-border strikes targeting Kurdish groups in the country's northeast.

Turkey announced last Sunday it had carried out air strikes against semi-autonomous Kurdish zones in north and northeastern Syria, and across the border in Iraq. It has also threatened a ground offensive in those areas of Syria.

Demonstrators in Kurdish-controlled Qamishli, in Hasakeh province, brandished photos of people killed during recent strikes in the semi-autonomous region, an AFP correspondent said.

"Only the will of the Kurdish people remains," said protester Siham Sleiman, 49. "It will not be broken and we remain ready. We will not leave our historic land."

After a three-day lull, Turkish fighter jets heavily bombed Kurdish-controlled areas north of Aleppo early on Sunday, according to the Britain-based Syrian Observatory for Human Rights, a war monitor.

Protesters in Qamishli also chanted in favour of the resistance in "Rojava" -- the name Kurds in Syria give to the area they administer.

"The message that we want to convey to the world is that we are victims of eradication," said Salah el-Dine Hamou, 55.

"How long will we continue to die while other countries watch?"

The Turkish strikes come after a November 13 bombing in Istanbul that killed six people and wounded 81. Ankara blamed the attack on the Kurdistan Workers Party (PKK), which it and its Western allies consider a terrorist group.

The PKK has waged an insurgency against the Turkish state since 1984. Turkey alleges that Syrian Kurdish fighters are the PKK's allies.

Kurdish groups denied any involvement in the Ankara blast.

The Turkish raids have killed at least 63 Kurdish and allied fighters and Syrian regime soldiers, as well as a Kurdish journalist, according to the Observatory, which relies on an extensive network of sources in Syria.

Eight people have been killed in retaliatory artillery fire, three of them across the Turkish border.

The US-backed Syrian Democratic Forces (SDF), the Kurds' de facto army in the area, led the battle that dislodged Islamic State group jihadist fighters from the last scraps of their Syrian territory in 2019.