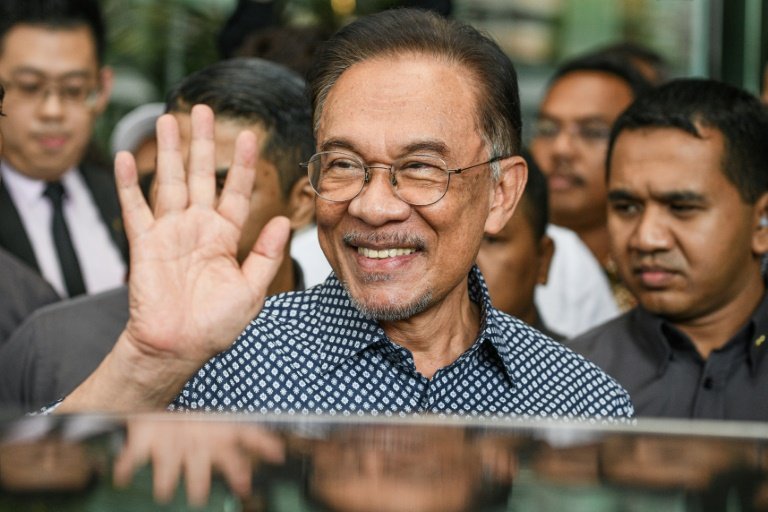 The ceremony at the National Palace closed the chapter on one of the most dramatic elections in Malaysia's history, after no party managed to secure a majority to form a government for the first time since independence in 1957.

Anwar's ascension to the premiership caps a turbulent political life, which has not only propelled him into the corridors of power but also landed him inside a jail cell.

"I will not tolerate corruption and abuses ... None should be marginalised under my administration," Anwar told a news conference.

He said his focus would be on the economy.

"This is a national unity government. All are welcome, on condition you accept the fundamental rules of good governance, no corruption and Malaysia for all Malaysians," Anwar said.

He said his multi-ethnic Pakatan Harapan coalition had been able to secure a majority after gaining seats from old foes in the former ruling bloc Barisan Nasional and another party in Sarawak state on Borneo island.

Anwar's coalition campaigned on an anti-graft message and won the most seats in the election with 82. That was ahead of the 73 won by former prime minister Muhyiddin Yassin's Malay-centric Perikatan Nasional bloc but still well short of the 112 needed for a majority.

Both leaders were summoned by the king this week in an attempt to break the deadlock but no deal could be struck. The king then held a special meeting with other royals on Thursday before the palace announced Anwar as the new premier.

Seeking to boost the legitimacy of his appointment, Anwar said his coalition would propose a vote of confidence in parliament on December 19.

Anwar's supporters were in a celebratory mood in the capital, Kuala Lumpur.

"I got goosebumps, seriously," said 36-year-old Norhafitzah Ashruff Hassan. "He fought hard to be given the chance to be PM. I hope he performs well and proves his worth."

Muhammad Taufiq Zamri, a 37-year-old product manager said: "I cannot express in words the ecstatic feeling I have."

Anwar said he had received a congratulatory phone call from Turkish President Recep Tayyip Erdogan just before his news conference.

The premiership is the culmination of a 25-year rollercoaster for Anwar.

The firebrand former student activist was first poised to take the reins in the late 1990s, after serving as finance chief and deputy prime minister under Malaysia's political patriarch Mahathir Mohamad.

But the two had a bitter falling-out over how to handle the 1997-98 Asian financial crisis.

Mahathir sacked his former protege, who was also expelled from their then-party the United Malays National Organisation (UMNO), and charged with corruption and sodomy. Anwar said the charges were politically motivated.

Anwar was sentenced to six years in jail for corruption in 1999 and then given an additional nine on a sodomy charge the following year.

Street protests erupted and evolved into a movement for democratic reforms, with Anwar stringing together an opposition coalition from behind bars.

The Mahathir-Anwar tussle has dominated and shaped Malaysian politics over the past four decades, "alternately bringing despair and hope, progress and regress to the country's polity", according to Oh Ei Sun of the Pacific Research Center of Malaysia.

The Malaysian Supreme Court overturned Anwar's sodomy conviction in 2004 and ordered him freed.

Anwar re-aligned with Mahathir during the 2018 elections, when his nonagenarian foe came out of retirement to challenge incumbent Najib Razak, who was mired in the billion-dollar 1MDB financial scandal.

Their detente scored a historic victory against UMNO and Najib, who is now serving a 12-year jail term for corruption.

Mahathir became prime minister for the second time, with an agreement to eventually hand the premiership to Anwar.

He never fulfilled that pact and their alliance collapsed after 22 months.

In his most recent bid to lead Southeast Asia's third-largest economy, Anwar once again pledged to end corruption and cultivate multi-ethnic harmony.

James Chin, a professor of Asian studies at the University of Tasmania, told AFP the palace's announcement "will be welcomed internationally since Anwar is known as a Muslim democrat worldwide".

"His biggest challenge will be to lead Malaysia out of the economic malaise following the pandemic."