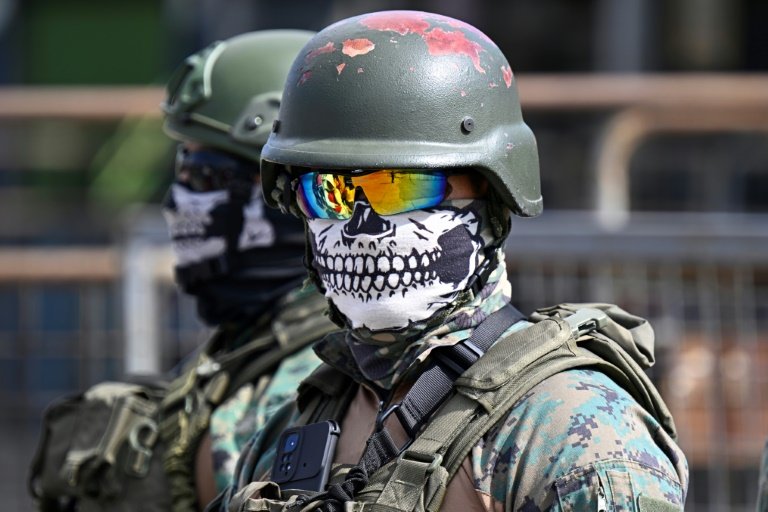 Ecuadoran soldiers guard the perimeter of the Guayas 1 prison amid disturbances there on November 4, 2022 / © AFP

Ecuador has become an unlikely hub for the global drug trade, flooding the world with Colombian cocaine while bloodshed rages between a complex tapestry of local gangs backed by Mexican and European mafia.

Ecuador is not known to have large plantations of drug crops, laboratories for refining cocaine, or major drug cartels.

Instead, it has become a staging ground for foreign mafia, upping the stakes for local gangs who are brutally killing each other as they jockey for valuable alliances and control of drug routes.

In September, the United States listed Ecuador among the top 22 drug-producing or transit countries in the world.

Geography and corruption are among the main reasons that one of Latin America's smaller countries has evolved into a hotspot of transnational organized crime.

Ecuador borders the world's two largest cocaine producers, Colombia and Peru, who produce 1,400 and 400 tonnes of the drug respectively, according to UN estimates.

Its major Guayaquil port, from where most of the drugs are shipped abroad -- often in containers of bananas or in legal shipments by front companies -- is seen as having weaker controls.

This is largely because it has long been a haven for Colombian armed groups, such as the Marxist Revolutionary Armed Forces of Colombia (FARC) guerrillas.

Before a 2016 peace deal that led to its demobilization, FARC controlled Colombia's coca-growing areas for decades and acted as a go-between for farmers and drug traffickers.

Ecuadoran gangs would move the drugs "from the border to various ports," said Dalby.

However, in recent years patterns of criminal activity in the region have changed, the International Crisis Group (ICG) said earlier this month.

Cocaine production has boomed in Colombia, where dissident FARC rebels who did not lay down arms have started to produce cocaine in the south, and move it into Ecuador by "river or by road" themselves, said Dalby.

According to the ICG, Ecuador's move to dollarize its economy in 2000, and weak financial controls, also made it a "hotspot for laundering illicit profits."

According to a UN report, Ecuador was home to the third-highest number of cocaine seizures in 2020, with Colombia in first place, followed by the United States.

So who else has a finger in the pie?

A study by the Colombian Observatory of Organized Crime (OCCO) said that Ecuadoran criminal groups had also forged alliances with powerful families who control drug crops in Peru.

A network of rivers link Peru with southern Ecuador, easing the smuggling of goods and people.

Mexico's powerful Sinaloa and Jalisco New Generation cartels also operate in Ecuador. There is also an increased presence of Balkan mafia in the country.

The Mexican and Balkan cartels have alliances with Colombian armed groups who organize the transport of drugs to Ecuador.

Mathew Charles, who authored the OCCO study, told AFP there had been a "fragmentation" of the drug business between buyers and sellers.

The foreign mafia have forged alliances with local gangs such as the Chone Killers, the Choneros, Aguilas, Latin Kings or Los Lobos.

The battle for control among local gangs plays out in Ecuador's prisons, mainly in Guayaquil.

In the city's main prison complex, Guayas 1, each of the 12 blocks is controlled by a different gang.

Since last year, almost 400 inmates have died in several cities, most of them in Guayaquil, which has also been hit by car bombs and shocking scenes of bodies dangling from bridges.

According to OCCO, the war has been made bloodier by the fact that Mexican gangs often pay their local counterparts for their services with weapons rather than cash.

The mafia groups bribe the police, military, and prosecutors, and have turned to the kind of vicious violence typically seen in Colombia, Mexico, and other countries, where high-level officials targeting them, are killed.