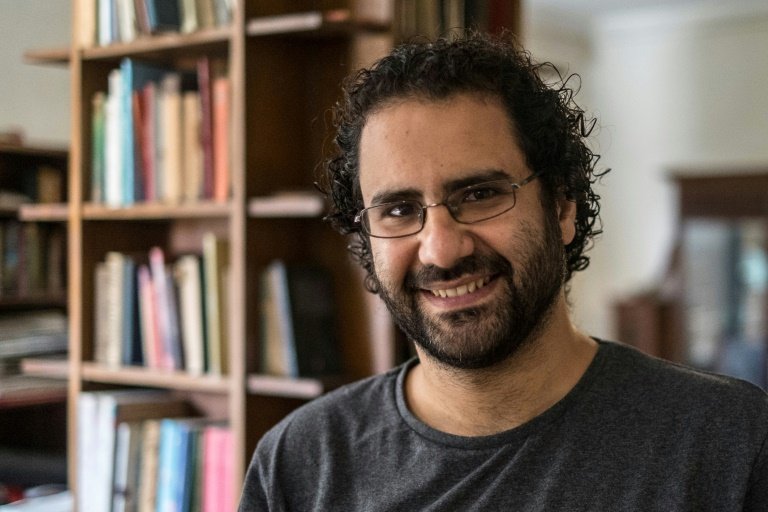 Egyptian activist Alaa Abdel Fattah, now in jail and on a hunger and water strike, pictured on May 17, 2019 at his home in Cairo / © AFP/File

A sister of Egypt's jailed dissident Alaa Abdel Fattah quickly disputed a claim by the prosecutor Thursday that the hunger striker was in "good health," as fear mounts that he is being force-fed.

Relatives have repeatedly demanded information on the health of the British-Egyptian activist in recent days, after he escalated his months-long hunger strike and stopped even drinking water as the COP27 climate summit opened in the North African nation on Sunday.

Late Thursday, the Egyptian prosecutor contended that "all his vital signs... are normal," and that he "is in good health and does not need to be transferred to hospital."

"Lie!", responded the activist's sister Mona Seif on Facebook, adding that the authorities were forcibly intervening to "deny" his hunger strike "so that he won't die".

The White House expressed "deep concern" about Abdel Fattah, after the activist's lawyer said he had been refused access to him, despite being authorised for such a visit by the interior ministry.

Abdel Fattah's mother Laila Soueif, who has likewise tried to access the Wadi al-Natroun prison north of Cairo, was informed that "medical intervention was taken... with the knowledge of judicial entities", the activist's sister Mona Seif wrote on Twitter.

"They should allow our mother to see him immediately and see for herself how he is," Seif added.

Abdel Fattah, a veteran pro-democracy and rights campaigner, is serving a five-year prison sentence for "spreading false news" by sharing a Facebook post about police brutality.

International concern has mounted since the 40-year-old also began declining liquids on Sunday.

On Thursday, an officer told the activist's mother that he was "under medical intervention". Hossam Bahgat, founder of the Egyptian Initiative for Personal Rights (EIPR), the country's largest rights group, said that statement "means he is being force-fed".

Amnesty International said they were "worried" that medical decisions for Abdel Fattah were "not made by independent doctors free from interference and coercion by security". 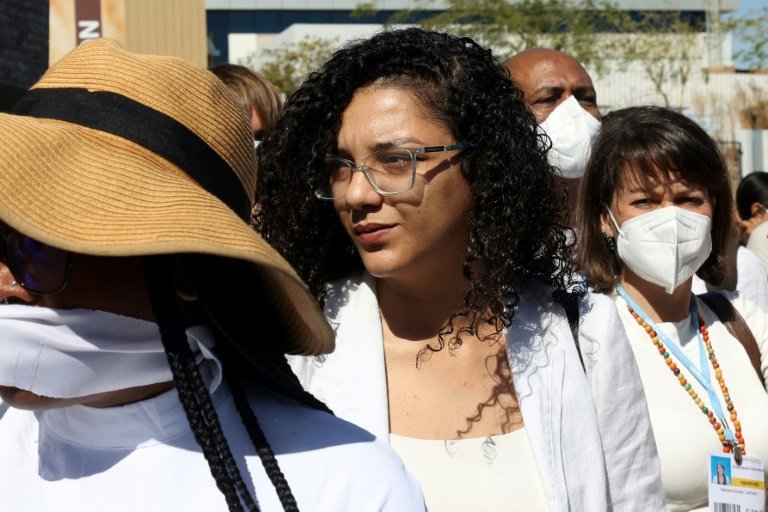 The dissident's aunt, novelist Ahdaf Soueif, earlier this week said the family was concerned about "rumours of force-feeding and of sleep-inducing drugs".

Soueif demanded that he be moved to the Qasr al-Aini University Hospital, Cairo's largest state medical facility, fearing the prison hospital "is probably not equipped" to care for a patient who has been living for months "on 100 calories a day".

Abdel Fattah's lawyer, Khaled Alia, said Thursday that "the interior ministry refused to implement the prosecutor's permit for us to visit Alaa under the pretext that the permit was dated" the day before.

Also on Thursday, US National Security Adviser Jake Sullivan announced that the White House had been in "high-level" communication with Egypt's government, expressing "deep concern" and a desire to see Abdel Fattah freed.

British Prime Minister Rishi Sunak, French President Emmanuel Macron and German Chancellor Olaf Scholz had already voiced their own concern during the climate summit and called for his release.

On Thursday, hundreds of COP27 participants, dressed in white like Egyptian prisoners, chanted "Free him!" and "no climate justice without human rights!".

Others shouted "Free them all!" in reference to the 60,000 political detainees rights groups say are incarcerated in the country, many of them in brutal conditions and overcrowded cells -- accusations which Cairo rejects.

Abdel Fattah's case and the wider rights situation are intensely sensitive in Egypt, ranked 135 out of 140 countries in the World Justice Project's rule of law index.

As international criticism of Egypt mounts, a counter-campaign has grown.

One Egyptian lawmaker protested during a press conference by Sanaa Seif, Alaa Abdel Fattah's other sister, at COP27 -- before being expelled by UN security -- and another has called on parliament to protest. 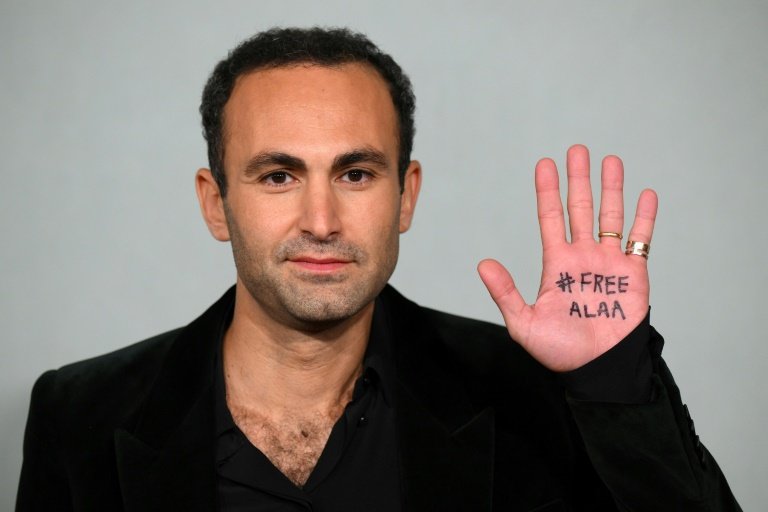 Egyptian-British actor Khalid Abdalla, poses in London with the words "Free Alaa" on his hand / © AFP

Egypt's mission in Geneva criticised the intervention by the UN's Turk, saying his "characterisation of a judicial decision as 'unfair' is an unacceptable insult".

A lawyer has also filed a complaint against Sanaa Seif for "conspiracy with foreigners" and "false information", according to activists.

The prosecution has yet to decide on the complaint, the same potential charge of spreading "false information" that Abdel Fattah himself was jailed for.

He had shared a post -- written by someone else -- accusing an officer of killing an inmate under torture.

A call for protests in Egypt on Friday circulated on social media on Thursday, and rights group Amnesty noted that Egyptian police deployments were being reinforced.