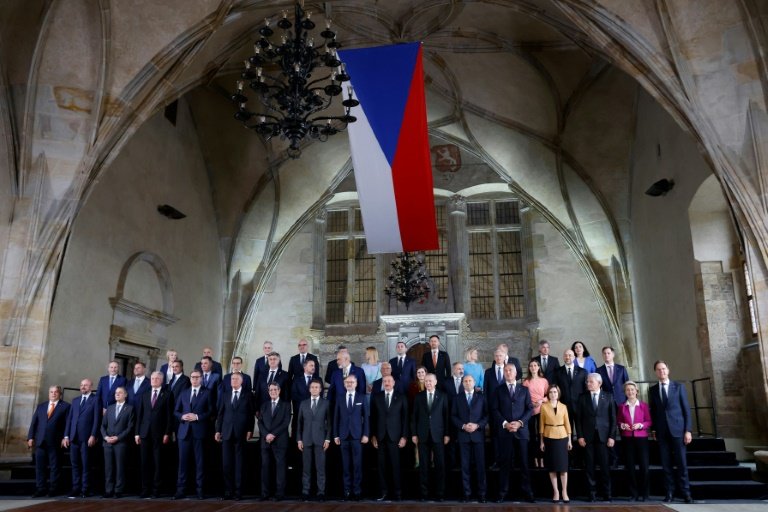 Given a rather unclear agenda, the family photo looked set to become a highlight of the meeting bringing together EU leaders alongside those of Armenia, Azerbaijan, Britain, Kosovo, Switzerland and Turkey / © AFP

Leaders from across Europe, with one big gap, featured in the family photo of the newly-established European Political Community from its inaugural meeting in Prague on Thursday.

The absence of Russian President Vladimir Putin highlights the deep divide between his country, which launched an invasion of Ukraine in February, and the rest of the continent.

Belarusian strongman President Alexander Lukashenko, Putin's ally, was also missing in the photo and at the summit organised by the Czech government, which now holds the rotating EU presidency.

Given a rather unclear agenda, the family photo looked set to become a highlight of the meeting bringing together EU leaders alongside those of Armenia, Azerbaijan, Britain, Kosovo, Switzerland and Turkey.

French President Emmanuel Macron, the mastermind behind the initiative, said the project was designed to send a message of "unity" and "strategic intimacy".

But rifts among the 44 leaders surfaced even as they posed at Prague Castle, the seat of the Czech presidency overlooking the city.

European Council head Charles Michel was on the left Hungarian President Viktor Orban, seen as the bloc's troublemaker over his lax stance on corruption laws and close ties to Putin.

European Commission chief Ursula von der Leyen mirrored him on the far right edge in the Gothic Vladislav Hall, making it clear that the EU and the new community initiative were two different things.

To Fiala's right, Azeri President Ilham Aliyev, slammed by the EU over his country's clashes with Armenia, stood next to his ally Turkish President Recep Tayyip Erdogan, also seen as problematic by the bloc.

Armenian Prime Minister Nikol Pashinyan, who met both Aliyev and Erdogan for talks earlier on Friday, was tucked behind Erdogan in the second row.

German Chancellor Olaf Scholz, criticised for hesitating on sending modern weapons to Ukraine, was at the back in the third row.

Vjosa Osmani, the president of EU hopeful Kosovo, came into the meeting hailing it as an opportunity to meet European peers "on an equal footing".

But she might have been upset with the photo -- as she was stuck on the back at the edge, largely shaded by the towering Ukrainian Prime Minister Denys Shmyhal.