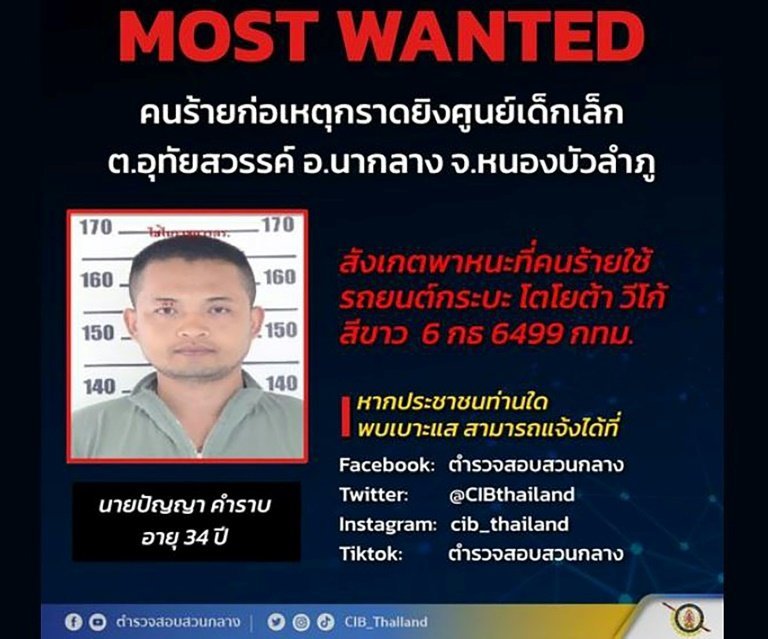 This handout from the Facebook page of Thailand's Central Investigation Bureau shows a picture of former policeman Panya Khamrab, who is believed to have killed at least 30 people in a nursery / © THAILAND'S CENTRAL INVESTIGATION BUREAU/AFP

A former police officer stormed a nursery in Thailand on Thursday, shooting dead at least 30 people, most of them children, before killing himself and his family.

The attacker, armed with a shotgun, a pistol and a knife, opened fire on the childcare centre in Nong Bua Lam Phu province at about 12:30 pm (0530 GMT) before fleeing the scene in a pickup truck.

"The death toll from the shooting incident... is at least 30 people," said Anucha Burapachaisri, a spokesman for the Thai prime minister's office.

The dead include at least 23 children, said police colonel Jakkapat Vijitraithaya, from the province where the attack happened.

After the attack, the gunman went home and killed himself and his wife and child, Jakkapat said.

The gunman has been named as Panya Khamrab, 34, and Jakkapat said he was dismissed from the force last year for drug use.

Eyewitness Paweena Purichan, 31, was riding her motorcycle to her shop when she encountered the fleeing Panya driving erratically.

"He intended to crash into others on the road," she told AFP.

"The attacker rammed a motorbike and two people were injured. I sped off to get away from him."

"There was blood everywhere."

Paweena said the attacker was well known in the area as a drug addict.

Thailand forms part of Southeast Asia's so-called Golden Triangle which has long been an infamous hotspot for the trafficking and abuse of drugs.

Surging supplies of methamphetamine have sent street prices crashing in Thailand to all-time lows, according to the UN Office on Drugs and Crime.

The mass killing comes less than a month after a serving army officer shot dead two colleagues at a military training base in the capital Bangkok.

While Thailand has high rates of gun ownership, mass shootings are extremely rare.

But in the past year, there have been at least two other cases of shooting murders by serving soldiers, according to the Bangkok Post.

In 2020, in one of the kingdom's deadliest incidents in recent years, a soldier gunned down 29 people in a 17-hour rampage and wounded scores more before he was shot dead by commandos.

That mass shooting, linked to a debt dispute between gunman Sergeant-Major Jakrapanth Thomma and a senior officer, triggered public anger against the military.

The soldier was able to steal assault rifles from an army depot before embarking on his killing spree, posting live updates on social media as he did so.

Military top brass were at pains to portray the killer as a rogue soldier.

🇹🇭 THAI NEWS REPORTS: Thai media reporting a shooting incident at a Child Development Center in Na Klang District of Nong Bua Lamphu Province. Exact number of deaths not confirmed yet but this is being reported as a major incident. #กราดยิงหนองบัวลำภู #Thailand pic.twitter.com/WeLzkEqhBj