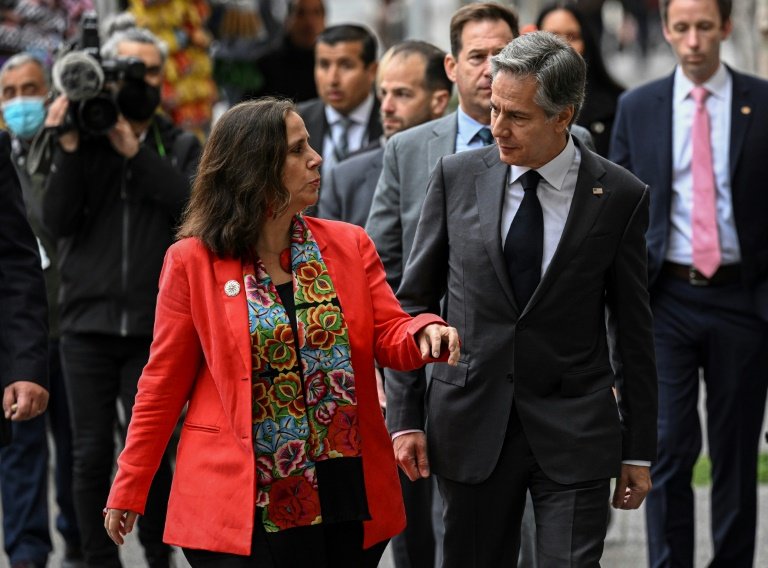 US Secretary of State Antony Blinken on Wednesday hailed a "shared approach and shared priorities" with Chile under President Gabriel Boric, one of a string of leftist leaders recently elected in Latin America.

This was Blinken's first visit to Chile, with which the United States historically has had close ties, on a regional trip that started on Monday in Colombia and will take him next to Peru.

Items on the agenda included regional security and migration.

Hailing the United States and Chile's "shared approach and shared priorities," Blinken said the countries would strive together for "building more equitable and inclusive economies... dealing with the issues that are front and center in the lives of our people."

The three countries on Blinken's itinerary had all recently elected leaders on the left of the political spectrum, which in Latin America has traditionally been strongly anti-American.

Asked about this, Blinken said: "my own sense is that what motivates electorates is the desire to see their governments actually address their concerns and produce concrete results."

If they fail, he added: "chances are they'll be voted out."

In Santiago Wednesday, Blinken met 36-year-old Boric, elected in December at the head of a leftist-alliance that includes the Communist Party, as well as his Chilean counterpart Antonia Urrejola.

American officials state privately that they are encouraged by Boric's first steps as president, which have included backing a new constitution to replace the one inherited from the era of US-backed dictator Augusto Pinochet.

In June, Boric was among Latin American leaders to criticize Washington's decision not to invite Nicaragua, Cuba and Venezuela -- all under US sanctions -- to a Summit of the Americas held in Los Angeles.

"We have to come together to have better development of our nations," the Chilean leader said at the time, adding that "exclusion is not the way."

"We have to hold the Cuban government to account just as we would any other government for denying the Cuban people those rights. We may have different approaches on the best way to do that," Blinken said on Wednesday.

Urrejola said they also discussed Venezuela, including stalled talks in Mexico on resolving the country's political and economic crises.

The dialogue held under the auspices of a contact group of European and Latin American countries, was suspended by Venezuela last October.

Urrejola said she hoped the group could "resume talks with the government of (Nicolas) Maduro, as well as with the Venezuelan opposition," adding that the goal was for "Venezuela in 2024 having free and democratic elections."

Blinken will travel to Lima next to attend the annual meeting on Thursday of the Organization of American States.