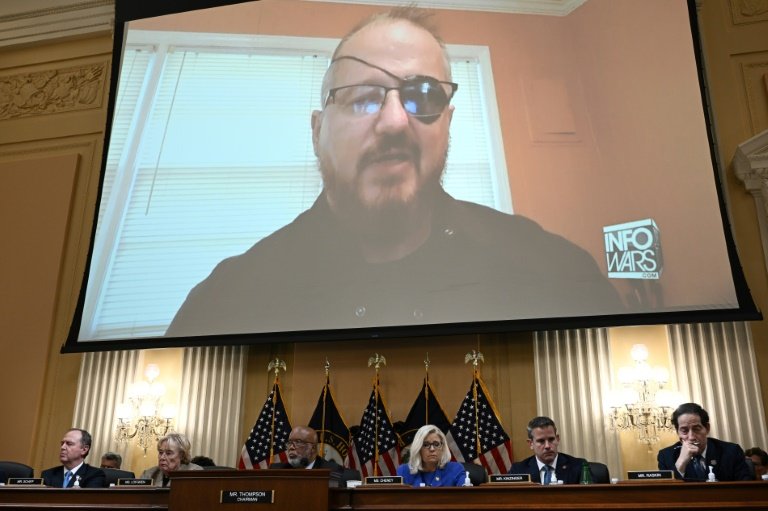 Stewart Rhodes, founder of the Oath Keepers, is seen on a screen in June 2022 during a Congress committee hearing to investigate the attack on the US Capitol / © AFP

The landmark sedition trial of five members of the far-right Oath Keepers opened Monday with prosecutors telling a jury the group mounted an "armed rebellion" at the US Capitol last year in a bid to keep Donald Trump in power.

Justice Department attorney Jeffrey Nestler said that Stewart Rhodes, the eyepatch-wearing former soldier and Yale law school graduate, knew exactly what he was doing when he led the militia's followers towards the Capitol on January 6, 2021.

Showing videos of the violent assault by dozens of group members dressed in military-style combat gear, Nestler said Rhodes directed them "like a general on the battlefield" as they sought to prevent 2020 election winner Joe Biden from being certified as the next president.

On January 6 the Oath Keepers "concocted a plan for an armed rebellion... plotting to oppose by force the government of the United States," Nestler said.

"They did not go to the Capitol to defend or to help. They went to attack," he said.

But defense lawyers, arguing in federal court in Washington, said the government had exaggerated its depiction of people who went to Washington to help with public security. 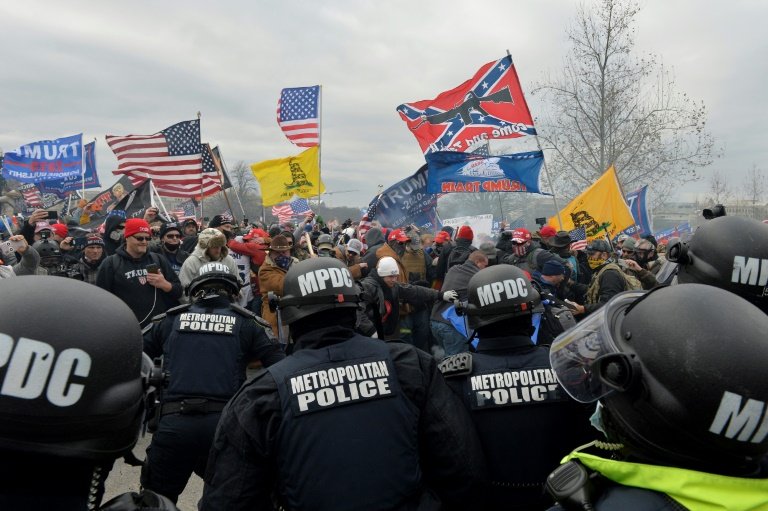 Supporters of former president Donald Trump clash with police and security forces as they storm the US Capitol on January 6, 2021 / © AFP/File

Prosecutors were "cherry-picking" a few inflammatory text messages from thousands and lacked proof of the charges.

Rhodes's lawyer Phillip Linder said the group went to Washington on January 6 to provide security for Trump's speech that day and other pro-Trump events.

"The Oath Keepers are basically a peacekeeping force," Linder said.

"The real evidence is going to show our clients were there to do security for events that were scheduled for the 5th and 6th" of January 2021, he said.

"This is the biggest bait-and-switch in the history of the American justice system," said David Fischer, attorney for Thomas Caldwell, one of the other four Oath Keepers charged in the case.

Caldwell was the Oath Keeper responsible for preparing a heavily armed but never-mobilized "quick reaction force" positioned just outside of Washington on the day of the insurrection.

But Fischer said Caldwell never entered the Capitol and never attacked anyone.

"He went down to Washington DC on a date with his wife," the attorney claimed.

The trial was the first in hundreds of cases from the January 6 riot to make use of the rare charge of seditious conspiracy.

Carrying a potential 20-year prison sentence, it is a gamble for the Justice Department, which wants to underscore the seriousness of the event, in which Trump supporters sought to prevent Congress from certifying Biden as the victor in the November 2020 presidential election.

Out of 870 people charged so far, the government has reserved sedition for just a few dozen of the attackers, mostly members of self-styled militia groups like the Oath Keepers and Proud Boys who allegedly planned and coordinated the assault.

Prosecutors sought to show that Rhodes, working with the others, began to plot a fight in Washington from the day after Biden defeated Trump.

"We must refuse to accept Biden," Rhodes told his followers just after the election, talking in a later message of starting a "civil war."

On the opening day prosecutors presented footage of the Oath Keepers storming the Capitol on January 6, dressed in combat gear and coordinating in a classic military "stack" formation to push through the crowd to the doors of the building.

The trial's first witness, FBI agent Michael Palian, who was involved in investigating the Oath Keepers, discussed a series of text messages involving the defendants that showed them as readily talking about taking action to block a Biden presidency -- alleged evidence of a conspiracy.

The first day of the hearing mostly steered clear of questions of whether Trump had any role in fomenting the January 6 violence.

The former president is already under investigation in Congress and the Justice Department over his possible links to the violence.

But Palian told the court that some of Rhodes's text messages in the weeks after the election to a "Friends of Stone" chat group that included Trump political advisor Roger Stone.

"What's the plan? We need to roll," Rhodes texted.

No evidence was presented that Stone read or replied to the text.