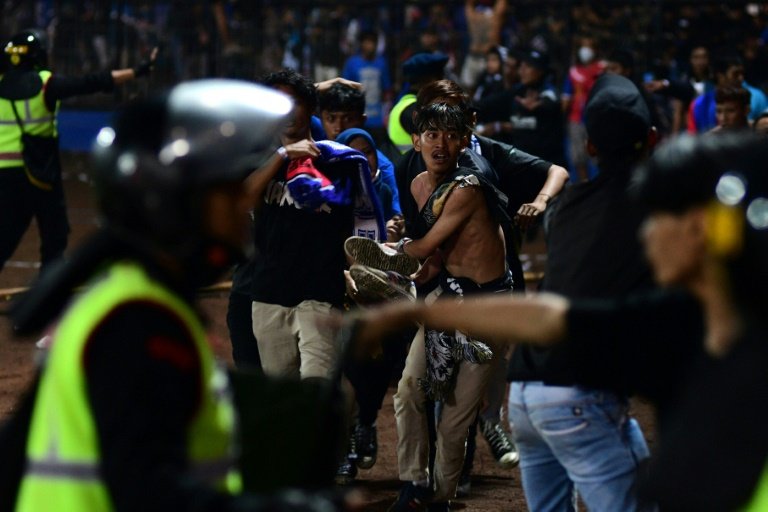 Sam Gilang rushed to the exit of the Indonesian football stadium with thousands of other terrified spectators as police fired tear gas and hit fans with batons, creating a stampede that claimed at least 125 lives.

"People were pushing each other and... many were trampled on their way to the exit gate," the 22-year-old survivor told AFP.

Spectators -- including women and children -- pushed and stepped on one another, scrambling through the packed terrace gasping for air, to reach any exit at Kanjuruhan stadium in the city of Malang, East Java.

Many of the victims were trampled or choked to death, police said, in what is one of the worst disasters in sporting history.

Gilang lost three friends in the crush. "It was so terrifying, so shocking," he said.

A domino effect of tragic events unfolded after the final whistle in a 3-2 win for visiting team Persebaya Surabaya -- the bitter rivals of Malang city's Arema FC.

Several thousand fans descended to the pitch -- some angry, some who wanted to join the crowd to shake the hands of players for home team Arema FC after the loss to their fierce rivals. 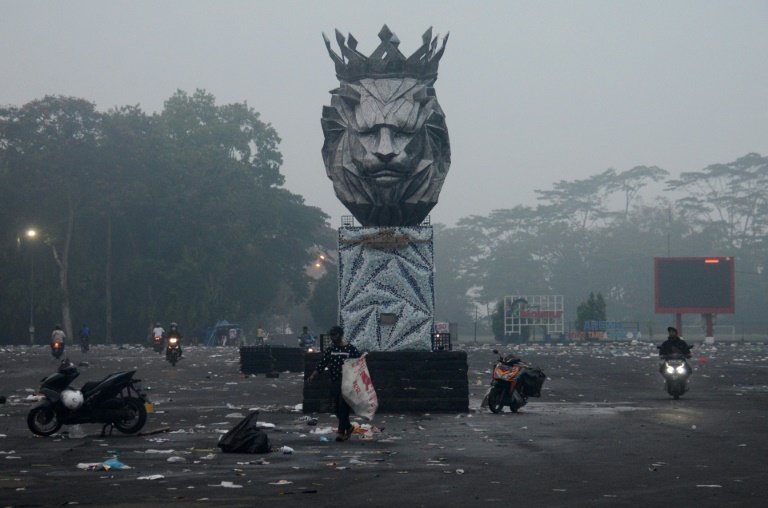 Anger spread outside the stadium. Supporters threw any item they could find -- rocks, plastic bottles -- at police. / © AFP

With horns blaring and obscenities shouted at the police from the crowd, they watched as their fellow fans ran across the grass.

But the police tried to force fans back into the confined stands, pushing them with their batons and riot shields.

They then unleashed a hail of tear gas on the terraces in front of the stadium's exit gates 12 and 13.

Police said there was a "riot" but some witnesses rebuffed that description of events.

"There was no riot. I don't know what the issue was, they suddenly fired tear gas," 43-year-old spectator Doni, who declined to give his last name, told AFP.

"That's what shocked me, didn't they think about kids, women?"

Panic set in as the canisters rained down, causing hundreds to rush for the exit points.

"Smoke spread everywhere, I got hit and I panicked. The exit was already too crowded. I was confused and scared about which to take," said 17-year-old Fian, who declined to give his last name. 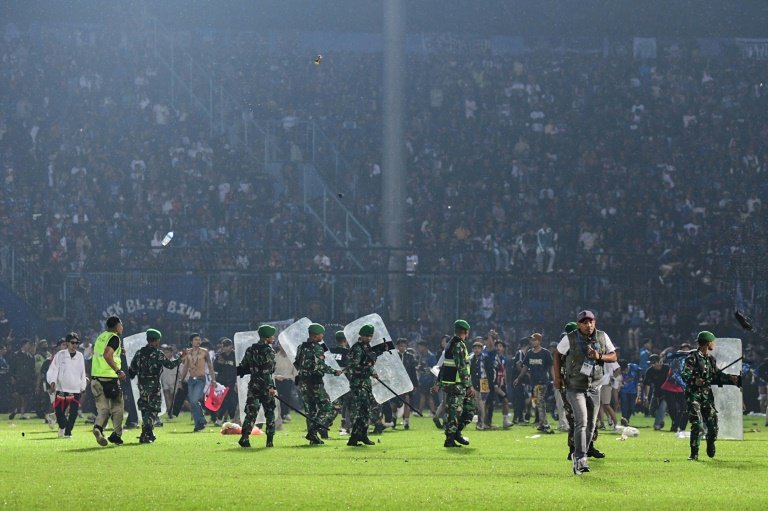 Several thousand fans descended to the pitch, some angry, some who wanted to shake the players' hands of home team Arema FC after the loss to their fierce rivals / © AFP

With his eyes stinging and unable to breathe, Fian recalled people shouting to each other, "escape through the emergency exit to your left!" -- potentially directing hundreds to a doorway only wide enough for one person.

Those who managed to get out emerged carrying lifeless bodies out of the stadium, inciting fury among the escaped spectators.

Supporters threw any item they could find -- rocks, plastic bottles -- at police as officials tried to evacuate from the stadium.

Toppling police cars and trucks, furious fans set them ablaze in an act of revenge for what had transpired.

"The police were so arrogant, they could have just directed the supporters," Gilang said. "It's enough to use the batons, no need to use tear gas."

Back in the stadium, one of Gilang's friends lay dead in the home team's changing room, carried there after being trampled to death.

In the immediate aftermath, Indonesia is grappling with its own Hillsborough moment -- the 1987 disaster in England that led to the deaths of 97 Liverpool fans during an FA Cup semi-final.

President Joko Widodo said an investigation into Indonesia's tragedy will follow, as well as a safety review into all football matches -- which are suspended until "security improvements" are completed.

But improvements or not, "now my parents said I am not allowed to go watch football anymore," survivor Fian said.