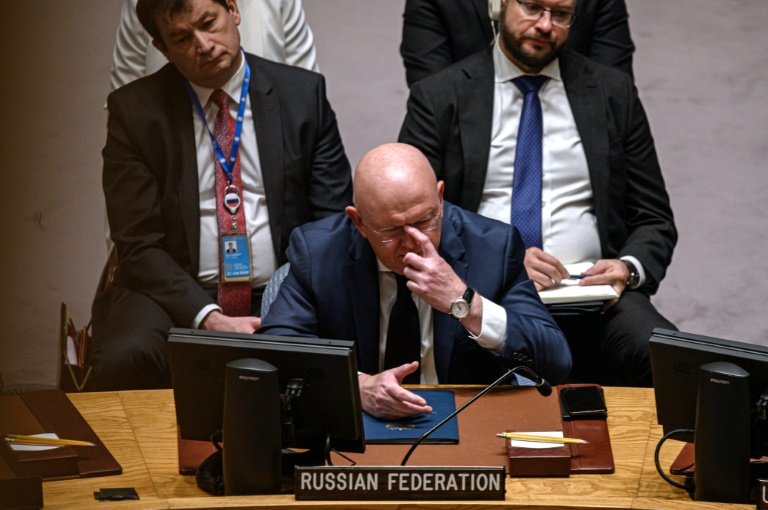 Russia's ambassador to the United Nations, Vasily Nebenzia, slammed Western members of the UN Security Council for "pushing" Moscow to use its veto power and reject a resolution condemning his country for annexing parts of Ukraine / © AFP

Russia on Friday vetoed a Western bid at the UN Security Council to condemn its annexations of Ukrainian territory but found no support, with China and India abstaining.

Russia's veto was a certainty but Western powers hoped to show Moscow's isolation in its war and will now take the condemnation effort to the General Assembly, where every nation has a vote and none can kill a resolution.

The United States pushed through the draft Security Council resolution hours after Russian President Vladimir Putin announced that Moscow had taken over four areas of Ukraine which held Kremlin-organized referendums on land seized by Russia's military.

"This is exactly what the Security Council was made to do -- defend sovereignty, protect territorial integrity, promote peace and security," the US ambassador to the United Nations, Linda Thomas-Greenfield, said at the start of the meeting.

"The United Nations was built on an idea that never again would one country be allowed to take another's territory by force," she said, later promising a General Assembly vote. 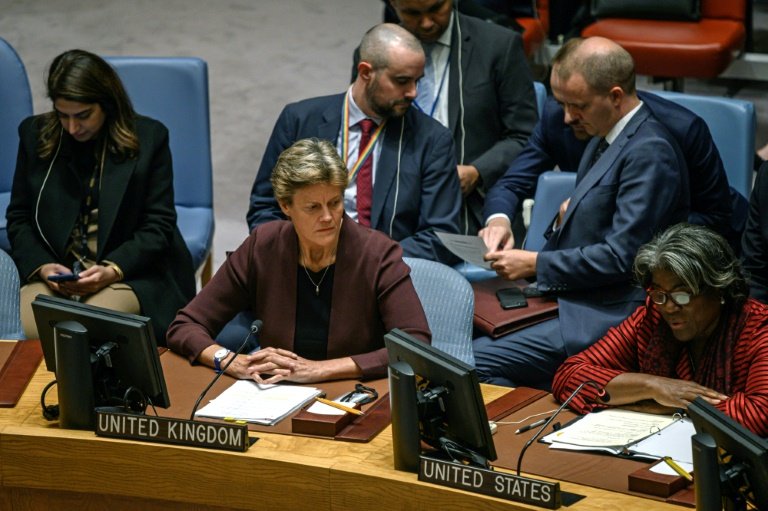 Russia's ambassador, Vassily Nebenzia, complained that it was unprecedented to seek condemnation of one of the five veto-wielding permanent members of the Security Council.

"Do you seriously expect Russia to consider and support such a draft? And if not, then it turns out that you are intentionally pushing us to use the right of the veto in order to then wax lyrical about Russia abusing this right," Nebenzia said.

The resolution, co-sponsored by the United States and Albania, would have condemned the "illegal" referendums held in Russian-occupied parts of Ukraine and called on all states not to recognize any changes to Ukraine's borders.

It also would have called on Russia to withdraw troops immediately from Ukraine, ending an invasion launched on February 24.

Putin shortly before the invasion visited Beijing and agreed to a closer relationship. But China has stopped short of robustly supporting Russia, with US officials saying Beijing has refused requests to supply weapons.

"The sovereignty and territorial integrity of all countries should be safeguarded," said China's ambassador, Zhang Jun.

"China calls on all parties concerned to exercise restraint, refrain from actions that actually exacerbate tensions and leave space for a solution through diplomatic negotiations." 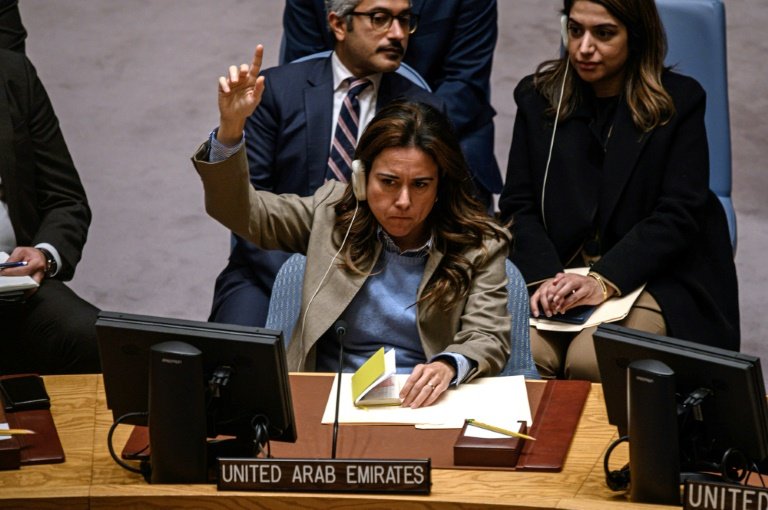 The United Arab Emirates envoy to the United Nations, Lana Nusseibeh, signals her country's support at the UN Security Council for a resolution condemning Russia for its annexation votes in four territories of Ukraine / © AFP

India, Brazil and Gabon also abstained. India has historic defense ties with Russia despite a warming relationship with the United States, which had privately leaned on New Delhi to support the resolution.

"Escalation of rhetoric or tension is in no one's interest," said India's envoy, Ruchira Kamboj.

Among the notable affirmative votes were Mexico, which has put forward a peace proposal, and the United Arab Emirates, which had hesitated on US-led sanctions on Russia.

"Not a single other member of this Council recognizes Russia's attempted illegal annexation of Ukrainian territory. Russia's veto doesn't change that fact," she said.

"This is the largest forcible annexation of territory since the Second World War. There is no middle ground on this."

Immediately after the veto, the Security Council went into a session requested by Russia on gas leaks in the Nord Stream pipelines that connect Russia to Europe under the Baltic Sea.

Nebenzia, the Russian envoy, spoke of NATO exercises and helicopter movements in the area and quoted US President Joe Biden's statement in February that "there will be no Nord Stream 2" -- a reference to US pressure on Germany to scrap the project -- if Russia invades Ukraine.

"You can't deny the words of your own president," Nebenzia said, denouncing "international terrorism" for the gas leaks.

Richard Mills, the US deputy representative, accused Russia of calling the meeting "to foster conspiracy theories."

Russia seeks to "distract us from addressing the main issue at hand, which is the continuing aggression against Ukraine and the destruction of civilian infrastructure on Ukrainian sovereign territory," Mills said.