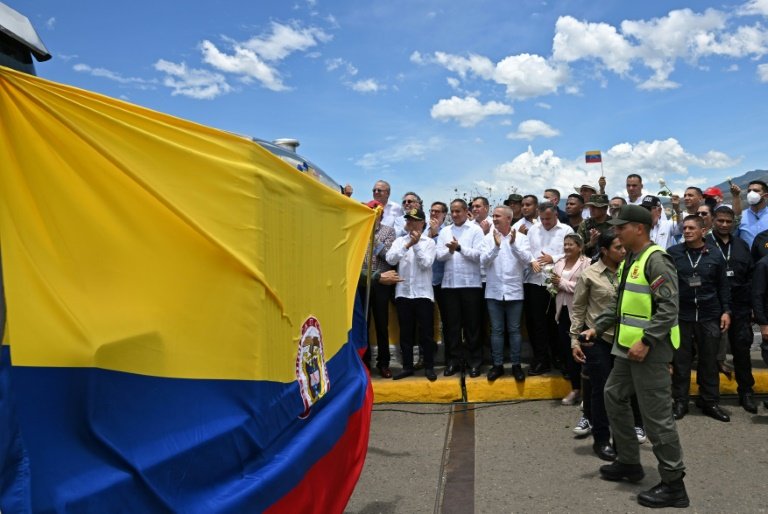 Venezuela and Colombia on Monday reopened their border to vehicles transporting goods following seven years of partial closure, including three years in which it was fully closed due to a political spat.

The first truck left San Antonio del Tachira on the Venezuelan side of the border just after midday and crossed the Simon Bolivar bridge to Cucuta in Colombia.

"We are resuming relations and taking firm steps to advance in the total and absolute opening of the border between brother peoples," said Maduro on Twitter.

"It's a historic and transcendental day!"

But since Petro succeeded him in August, Colombia's first ever left-wing president has moved to mend relations with Venezuela's populist leftist government.

"It is very, very important for us to progress on the fundamental rights of the people. Families have been separated, there was a break in our relationships of respect and trust," Colombian lawmaker Jairo Cristo said during the ceremony.

This reopening is the first step toward the complete reestablishment of commercial relations between the two countries, which were worth around $7.2 billion in 2008.

"The closure (of the border) has done a lot of damage... Let's see if from now on we can hear another song," said Jairo Sayago, a 55-year-old Colombian trader from San Antonio.

Asked about a possible meeting with his Venezuelan counterpart, Petro said that "there is no date" fixed for the moment.

"I hope that the mass migration that came from Venezuela to here... will now be able to be slowed down," he said, also calling for a "necessary integration of the economy of the two countries."

"I want the first beneficiaries to be the people who live on both sides of the border," he added.

The neighbors share a 2,200-kilometer (1,350-mile) border infested with armed groups that have created insecurity by fighting over lucrative illegal trades such as drug trafficking and smuggling.

The two countries were due to resume flights between their capitals on Monday.

Caracas and Bogota formally reestablished diplomatic relations on August 29 by sending ambassadors to each other's capitals.

Venezuela had broken off diplomatic relations in 2019 after Duque expressed support for opposition leader Juan Guaido's attempts to oust Maduro.

Border crossing by vehicles carrying goods had been restricted since 2015 and were blocked entirely in 2019 as Guaido unsuccessfully tried to force through trucks carrying food and medicine from the United States.

Venezuela has suffered years of economic crisis that has seen poverty soar and millions of people leave the country, many to settle in Colombia.