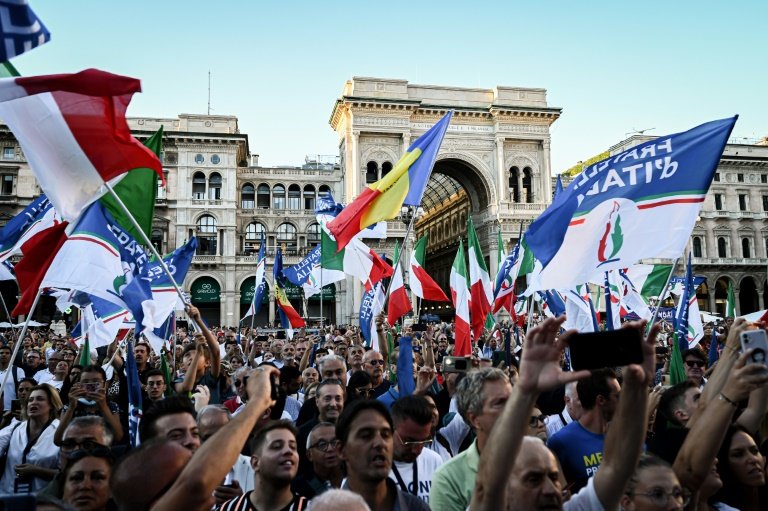 From abortion to gay marriage, civil rights activists in Catholic-majority Italy fear a significant set-back with the expected election triumph of a far-right party dedicated to defending "traditional family values".

Giorgia Meloni, a 45-year-old who has campaigned under the slogan of "God, country and family" and against "woke ideology", is likely to become Italy's first female prime minister if her post-fascist Brothers of Italy party wins the general election on Sunday.

"Yes to natural families, no to the LGBT lobby! Yes to sexual identity, no to gender ideology! Yes to the culture of life, no to the abyss of death!" a wild-eyed Meloni cried in a speech in June.

"Christian mother" Meloni has since blamed the febrile tirade, made during a rally of the Spanish far-right Vox party, on tiredness -- although she said she would "change the tone, not the content".

A series of left-leaning celebrities, including Instagram star Chiara Ferragni, have sounded the alarm over Meloni's Brothers of Italy party and its allies, Matteo Salvini's anti-immigrant League and Silvio Berlusconi's right-wing Forza Italia.

Pierpaolo Piccioli, creative director at fashion house Valentino, was on Thursday the latest to urge voters to defend rights won in the shadow of the Vatican.

"It's not enough to call for new rights. We have to fight to make sure we keep those we have", he told the Repubblica daily, adding that he wanted his children to "live in an Italy without fear".

The attack by a senior Brothers of Italy member earlier this month on co-parenting lesbian polar bears in the Peppa Pig cartoon -- a storyline he slammed as "gender indoctrination" -- prompted both ridicule and unease.

Civil partners Alessia and Eleonora, mothers to a one-year-old boy in Rome, told AFP how painful it was to not be seen as equal.

"We do the same things as all parents... (but) we aren't recognised as a family in Italy," said Alessia, who declined to give her surname.

The centre-left Democratic Party (PD) says gay marriage and same-sex adoption are priorities, with leader Enrico Letta telling Meloni recently that the most important thing for children was "to be loved".

They need "a father and a mother", retorted Meloni.

Brothers of Italy has roots in a neo-fascist movement formed to carry on the legacy of dictator Benito Mussolini.

Some of the old guard remain, but Meloni is attempting to construe herself instead as a "nationalist conservative", said Mabel Berezin, an expert on fascist, nationalist and populist movements.

Fears that a Meloni-led government would ape violations of fundamental principles seen in Hungary or Poland were probably "overblown", the sociologist at Cornell University told AFP.

The risks may be subtler than that, according to Emma Bonino, who leads the +Europe party.

Abortion became the most divisive campaign issue after Meloni said she wanted to give a choice to women unsure about terminating pregnancies.

"We won't touch the abortion law. We just want (women) to know there are other options," she said.

Meloni is likely to keep her word on not criminalising abortion, said Bonino, who did time in jail in the 1970s for her fight to legalise it.

But she fears Meloni will instead "push for the law to be ignored", exacerbating an existing problem -- difficulties in getting hold of abortion pills or finding gynaecologists willing to perform terminations.

"There are entire regions where... the gynaecologists are all conscientious objectors" who can opt out of performing the operation, Bonino said -- referring in particular to the Marche region in central Italy, which is governed by Brothers of Italy.

Meloni's supporters see her as a symbol of female empowerment -- an unmarried, working parent, who is about to break the political glass ceiling.

Laura Boldrini, one of Italy's most high-profile female politicians, said she did not think Meloni in charge "would mean women's lives improve".

"Meloni has never been about affirming women's rights, about valuing women or breaking down prejudices against them," she said this week.

Michela Murgia, a writer and political activist, said Meloni was a "violent creature... who has learned to speak in a reassuring way" so that "positions previously considered extremist now appear good sense".

Italy would do well, she said, to remember the Meloni at the Vox rally, "who seems possessed" and would "bring the same violence to her political rule".