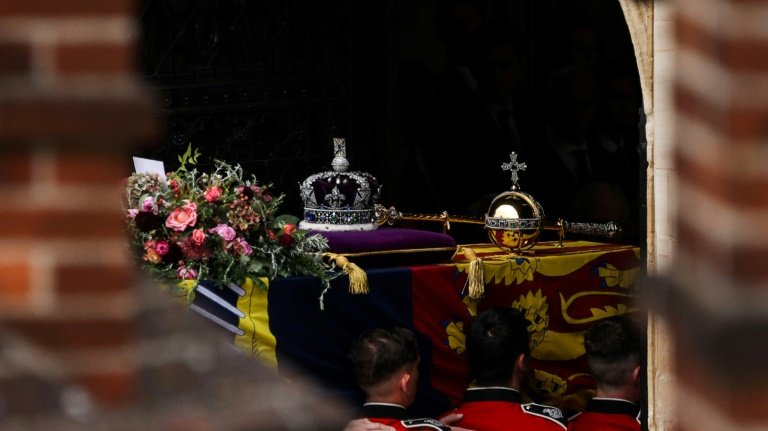 Queen Elizabeth II's coffin was lowered into the Royal Vault at St George's Chapel in Windsor Castle, before a private burial ceremony / © POOL/AFP

The royal family celebrated a "life of service, love and faith" as they bade farewell to Queen Elizabeth II in an intimate ceremony inside the grounds of her beloved Windsor Castle on Monday.

Following the majesty and pomp of her state funeral at London's Westminster Abbey earlier in the day, a smaller congregation gathered at the Gothic St George's Chapel to pay a more personal goodbye.

The royal hearse carrying the sovereign's body arrived at the castle at 3:40 pm after a 25-mile (40-kilometre) drive west from London, entering its gates to applause and tears among the huge crowd that had gathered since early morning.

The queen, who died on September 8 aged 96, moved with her late husband Prince Philip to the castle in early 2020, as the coronavirus pandemic began, and spent most of her time there.

Inside, her coffin was taken by the castle's manicured walkways, freshly mowed lawns and thousands of bouquets left by well-wishers, along with wreaths sent by wellwishers from around the world.

Her eldest son and successor, King Charles III, his heir William and second son Harry followed behind the coffin as it slowly made its way towards St George's Chapel.

Red-jacketed Grenadier Guards carried the heavy lead-lined oak casket through the great doorway of the chapel and its crowded nave, where many mourners bowed their heads in respect. 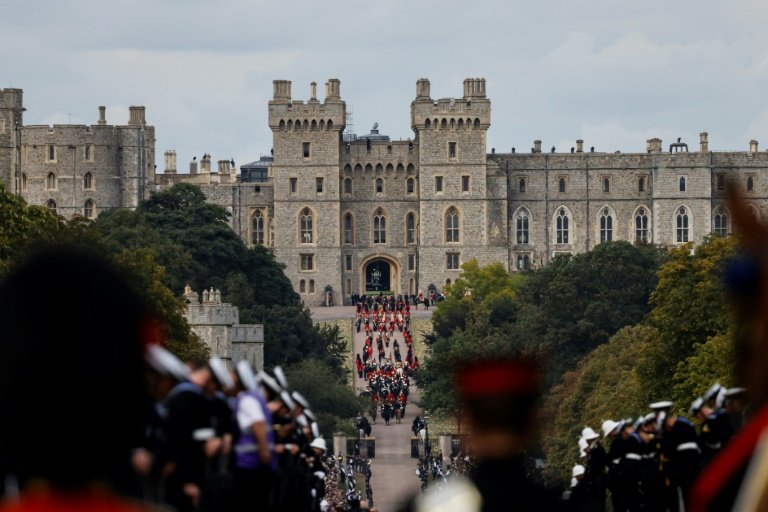 A choir sang the coffin to its catafalque, which was draped in purple velvet.

The Dean of Windsor David Conner, who led the ceremony, hailed Elizabeth's "profound Christian faith" that "bore so much fruit".

"Fruit, in a life of unstinting service to the nation, the Commonwealth and the wider world," he added.

Elizabeth often prayed in St George's Chapel, which dates back more than 500 years, and it was her wish that a final ceremony be held there. 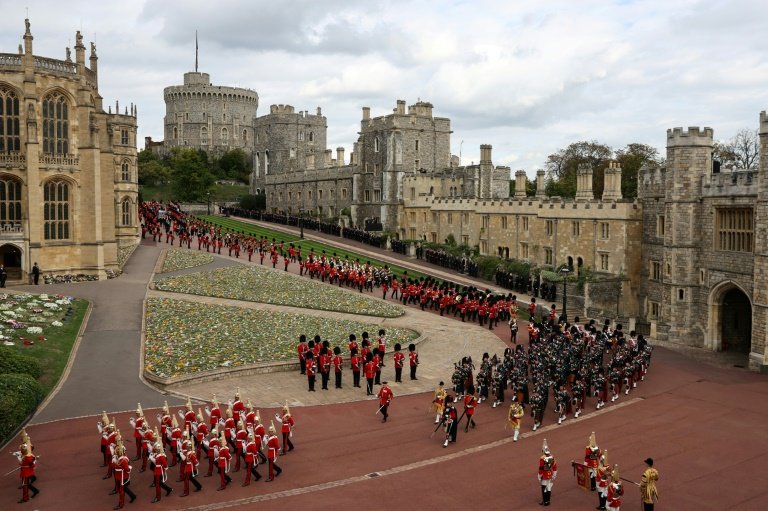 Although more intimate than Westminster Abbey, where hundreds of heads of states, foreign royalty and public figures were among the 2,000 guests, the service was still attended by around 800 mourners.

The chapel, whose construction began in 1475, is dear to the royal family, who have celebrated numerous baptisms and weddings there.

It is where Prince Harry married Meghan Markle in 2018 and also where Prince Philip's funeral was held under coronavirus restrictions last year.

"In the midst of our rapidly changing and frequently troubled world, (the queen's) calm and dignified presence has given us confidence to face the future, as she did, with courage and hope," said Conner, offering thanks for a "long life" and calling it "a blessing for us".

The sound of song and prayer then filled the chapel's ornate wooden choir, underneath the suspended banners of the Knights of the Garter, the ancient order of chivalry founded in the 14th century.

The queen was personally involved in planning many details of the ceremony, including the music.

It was mainly composed by William Harris, the chapel's organist between 1933 and 1961, whom the palace said taught the young Elizabeth to play the piano.

Before the final hymn, the royal sceptre and orb as well as the imperial crown -- symbols of the British monarchy's spirtual and temporal power -- were removed from the coffin and placed on three red cushions on the altar.

Charles then covered the coffin with the official flag of the Grenadier Guards.

The Lord Chamberlain -- the most senior official in the royal household -- broke his "wand of office", a highly symbolic gesture signifying the end of Elizabeth's reign.

The ceremony, which lasted around an hour, closed with another rendition of "God Save the King", the reworded national anthem.

For the first time in his life, Charles does not have to sing it. He stood straight, staring straight ahead as he had done all day.

But as the coffin of his "darling mama" was lowered into the Royal Vault, he blinked and bit his lip.