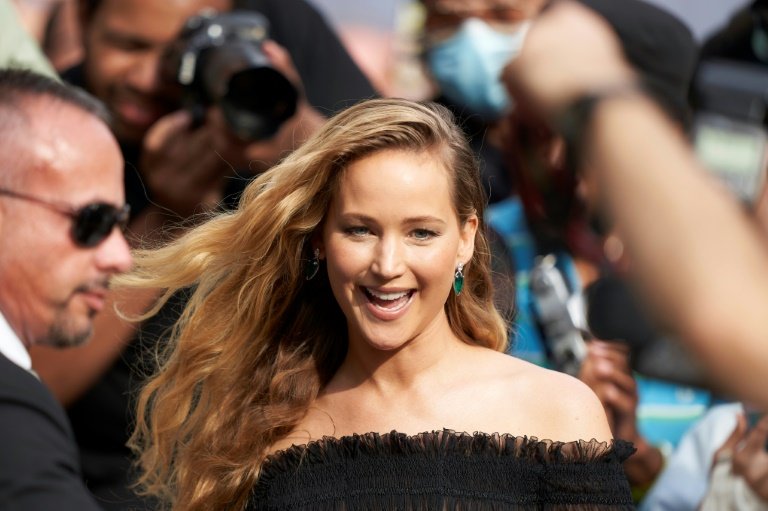 Jennifer Lawrence drew screaming fans to the red carpet for "Causeway," an indie drama in which she plays a military veteran / © AFP

When Jennifer Lawrence was offered a script about a wounded US Army engineer who returns from Afghanistan to a strained relationship with her mother, she was on a sabbatical from acting and not yet a parent.

The Oscar-winning "Silver Linings Playbook" star, 32, whose fame had rocketed ever since the wildly popular "The Hunger Games" movies, had been a near-ubiquitous presence with a prolific run of movies, before announcing a pause because "everybody had gotten sick of me."

But when she read a script for "Causeway" -- then entitled "Red, White, and Water" -- something changed.

"It was really just something that came from the gut, just like this urgency," she told AFP at the Toronto film festival.

"I was very clear that I didn't want to work, and then somehow it landed on my desk, and I just had this sense of urgency, like 'let's make it, let's do this.'"

A debilitating brain injury following an IED explosion in Afghanistan is not the only trauma she must overcome, as issues from her childhood and family life flood to the surface.

Lawrence chose the film in part to showcase "what these heroes go through to keep us safe."

"It was wonderful to be able to talk to the amazing men and women who have served, to try to get some more information and background," she said on the red carpet of the film's world premiere Saturday.

But she also partly drew on her own childhood for the role in "Causeway," in which Lynsey has a fractious relationship with her unreliable mother.

"I have complications in my childhood just like everybody else does -- so it was more kind of working that out," she said of the film, which began shooting in 2019 before it was interrupted by the pandemic and eventually resumed in 2021.

During that delay Lawrence also filmed and promoted doomsday comedy "Don't Look Up."

And she has since become a mother herself, giving birth earlier this year to her son Cy.

"Oh God, everything changes after you become a mom!" she told AFP.

"How am I complicating his life? I don't know yet," she joked.

The film sees Lynsey build an unlikely friendship with James, played by Brian Tyree Henry, an auto repair worker who fixes her truck when it breaks down.

While both grew up in New Orleans, their backgrounds are very different.

But he too has a family trauma buried deeply in his past, which the two bond over, in a relationship which soon forms the emotional anchor of the film.

"This film is an excavation of how we begin to process, how we manage, how we actually change, how we start to connect again," said director Lila Neugebauer, making her film debut after success on Broadway.

"Both Jen and Brian connect so deeply with their characters on this film, as actors and as human beings."

For Lawrence, there was "something about this woman who has been through so much, and is suffering from this invisible injury, and trying to rebuild her home and where she belongs."

"There was something that deeply connected with me," she said.

"Causeway" will be released November 4 in select theaters and on Apple TV+. The Toronto International Film Festival runs through September 18.