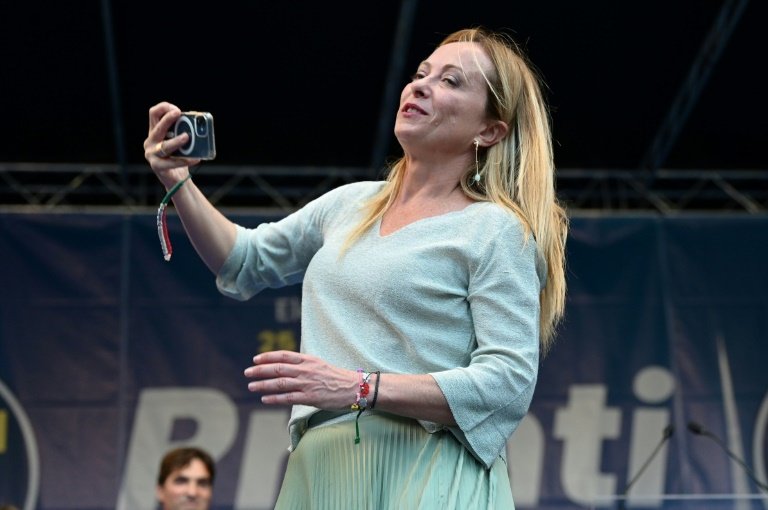 Far-right leader Giorgia Meloni on Tuesday launched her campaign to become Italy's first female prime minister in September elections, rallying supporters by asking: "I'm ready -- the question is, are you?"

Members of the thousand-strong crowd in the port city of Ancona shouted back "Yes!" and waved the flags of Meloni's Brothers of Italy party, as chants of "Giorgia, Giorgia" filled the warm summer air.

Just over one month before the September 25 vote, opinion polls put Meloni on course to take power in the eurozone's third largest economy as part of a right-wing coalition.

The 45-year-old was once at the heart of Italy's post-fascist movement but has sought to distance her party from the past, while presenting herself as a straight-talking "Christian mother" who can restore national pride.

During a nearly hour-long speech Tuesday, she railed against an over-reaching European Union, globalisation, coronavirus restrictions and mass migration, vowing to "liberate this national from a system of power that has kept it down".

"I like her, she's a straightforward, nice person and she has clear ideas for us for the future," said Paolo Berardi, a 50-something labourer from nearby Jesi who came to hear her speak.

He said he used to vote for Matteo Salvini of the anti-immigrant League, but switched his support two years ago, explaining: "Let's try a change."

In 2018 elections, Brothers of Italy secured just over four percent of the vote, but is now regularly polling at 24 percent, and Meloni is pitching herself as ready to rule.

"I am not afraid. I am ready to lead this battle," she insisted Tuesday, while saying that the outcome of the elections "depends on the Italians".

The snap vote was called in late July after Prime Minister Mario Draghi's coalition government collapsed, but with most Italians on holiday, Meloni has so far conducted her campaign on social media. 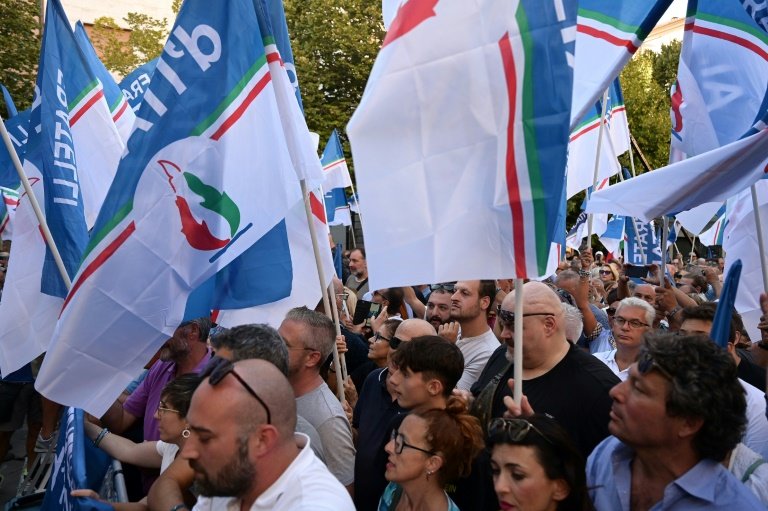 At her first major rally, she was introduced by Francesco Acquaroli, the Brothers of Italy president of the Marche region of which Ancona is the capital.

He was at the centre of a controversy in 2019 after attending a dinner celebrating Benito Mussolini's 1922 March on Rome, which marked the beginning of fascist rule in Italy.

Meloni has insisted fascism is in the past, while advocating a hard-right programme, from a naval blockade to stop migrants crossing the Mediterranean from North Africa, to an "Italians first" mantra.

She insisted Tuesday on the difference between economic migrants, who she accused of driving down wages, and refugees fleeing war or violence -- including those from Ukraine, which she strongly supports.

She also hit back at criticism from rivals after she shared a video posted on a news website purportedly showing the rape of a Ukrainian woman by an asylum seeker in the northern town of Piacenza, promising to restore law and order.

It was later removed by social networks for violating their terms, but she said was simply "showing solidarity" with the victim, whose image was blurred but whose voice could be heard, insisting that as a woman, she was "very attentive" to such issues.

Meloni's sex and youth mark her out in the male-dominated world of Italian politics, and many supporters like that about her.

"She is a woman, finally a woman, and a real person who doesn't speak like a politician -- when you ask her a question, she responds, even if you don't like her," said Dora, a sixty-something visiting from Monza, in the north of Italy.