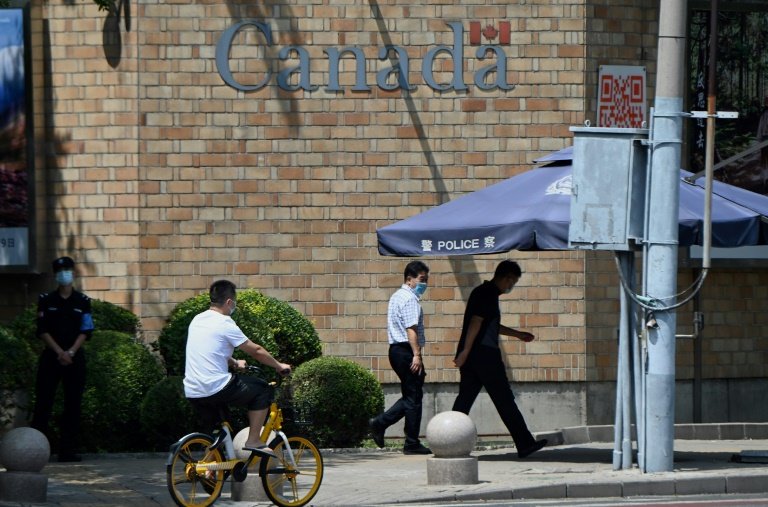 The Canadian embassy in Beijing. Ties between Canada and China have been tested in recent years / © AFP

A Chinese-Canadian tycoon who disappeared from a Hong Kong hotel five years ago has been sentenced to 13 years in prison and his company fined $8 billion for embezzlement and bribery, a Shanghai court said Friday.

Xiao Jianhua, one of China's richest people when he was allegedly abducted in 2017, reportedly had close connections to the upper echelons of the ruling Communist Party.

There had been no official word about Xiao -- who is a Canadian citizen -- until Ottawa confirmed in July that he was facing trial.

Xiao and his firm, Tomorrow Group, were found guilty of "illegally absorbing public deposits, breaching trust in the use of entrusted property... (and) illegal use of funds," the Shanghai No. 1 Intermediate People's Court said in a statement.

It added that Tomorrow Group had committed the "crime of bribery".

Xiao and his company pleaded guilty and cooperated with the authorities in recovering what they had illegally acquired, the statement said.

The Canadian embassy had said in July that its diplomats were denied access to the trial.

On Friday, China's foreign ministry insisted that because Beijing does not recognise dual citizenship, Xiao "does not enjoy the right to consular protection from other countries".

"Xiao has Chinese citizenship. China holds trials for criminal activity by its citizens in accordance with the law," foreign ministry spokesman Wang Wenbin told a briefing.

After attending university in the late 1980s, Xiao began selling computers and in the decades that followed built an empire with diverse interests including banking and insurance.

According to the Hurun Report, which ranks China's wealthiest people, Xiao was worth almost $6 billion in 2017.

Local media in Hong Kong had reported at the time of Xiao's disappearance that he was snatched by mainland Chinese agents -- fuelling concern over China's tightening influence in the financial hub.

Those fears were at the heart of massive pro-democracy protests that shook Hong Kong in 2019, prompted by a government bill that would have allowed extraditions to mainland China's opaque, party-controlled judicial system.

Xiao had reportedly denied allegations that he fled to Hong Kong in 2014 to escape a corruption crackdown in China.

He is said to have acted as a broker for the Chinese leadership, including for President Xi Jinping's family.

"After five years of quietly waiting, our family is still, based on my brother's strict instructions, putting faith in the Chinese government and Chinese law," Xiao's elder brother Xinhua told The Wall Street Journal in June this year.

The years after Xiao's disappearance have been marked by plummeting relations between China and Canada, sparked by the arrest in Vancouver of Meng Wanzhou -- the chief financial officer of telecoms giant Huawei -- at the request of the United States.

All three were released in September 2021 after Meng reached a deal with US prosecutors on fraud charges, ending her fight against extradition to the United States.

Since then there have been hopes of a thaw in diplomatic relations, with Beijing lifting a ban on Canadian canola imports earlier this year.