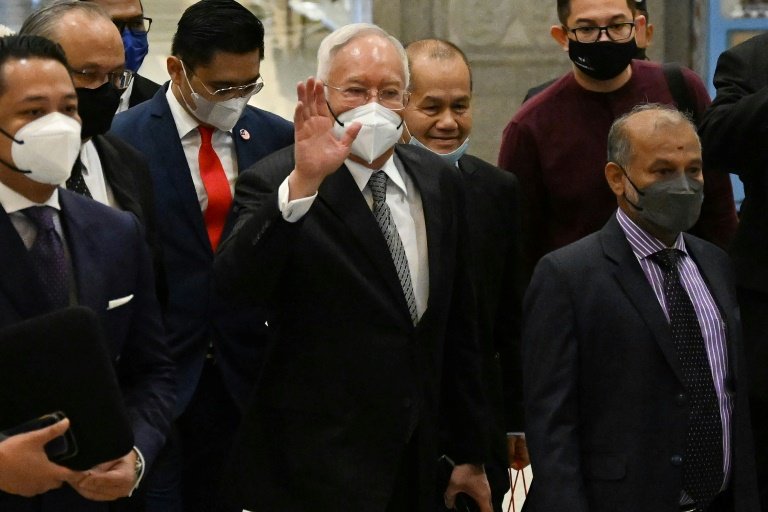 Malaysia's highest court said Tuesday it would hear former leader Najib Razak's final bid to overturn his 12-year jail sentence for corruption, with an acquittal potentially clearing the way for his return to power.

The appeal is the last high stakes court gambit left open to Najib -- but if he is unsuccessful he will have to start serving his jail sentence after years of legal wrangling.

The Federal Court's decision to proceed with an appeal, which will begin Thursday, came after it rejected the former prime minister's plea for a retrial.

Najib, 69, and his ruling party were unceremoniously tossed out of office in 2018 elections following allegations of their involvement in a multi-billion dollar scandal at state fund 1MDB.

The former prime minister and his associates were accused of stealing billions of dollars from the country's investment vehicle and spending it on everything from high-end real estate to pricey art.

Following a lengthy High Court trial, Najib was found guilty of abuse of power, money laundering and criminal breach of trust over the transfer of 42 million ringgit ($10.1 million) from a former 1MDB unit to his bank account.

He was sentenced to 12 years in jail in July 2020, and an appellate court last December rejected his appeal, prompting him to mount a final plea before the Federal Court, where any ruling will be final.

Najib had been hoping the court would grant a full retrial but that request was unanimously rejected by a panel of five judges on Tuesday.

"There is, to our minds, no miscarriage of justice," Chief Justice Tengku Maimun Tuan Mat said, adding Najib had "failed to cross the high threshold" of new evidence needed for a retrial.

Najib's lawyer asked for the court to adjourn for three or four months before starting the hearing but the panel, after some deliberation, rejected that request.

The judges set six hearing dates for the appeal, running up to August 26.

If the conviction is upheld, Najib will begin serving his jail sentence immediately, lawyers said.

An acquittal, however, could propel him into contention for his former post, as he remains popular in Malaysia despite the huge 1MDB scandal that plagued his administration.

A charismatic and compelling speaker, Najib has about 4.6 million Facebook followers and was recently seen pressing the flesh with leaders and supporters of the United Malays National Organisation (UMNO) party.

Until its dramatic defeat in 2018 off the back of the 1MDB scandal, UNMO had been the main governing party since Malaysia achieved independence in 1957.

"I am shocked and bitterly disappointed with the decision of the judges," a sombre Najib told reporters after Tuesday's decision.

"I hope in the final appeal we will be able to show the truth of the matter."

His lawyer Hisyam Teh Poh Teik added: "We will give this (case) due consideration because this is the final lap of the main appeal."

The collapse of the coalition that succeeded him -- led by former leader Mahathir Mohamad -- subsequent infighting and the failure of two succeeding governments to institute promised reforms have contributed to Najib's lasting popularity, analysts say.

Malaysians are also facing higher living costs amid a surge in food prices and rise in interest rates.

"Voters seem to have forgotten or forgiven Najib over the 1MDB scandal," said James Chin, professor of Asian Studies at the University of Tasmania in Australia.

"If he is acquitted or secures a royal pardon, he is on track to be a prime minister candidate," Chin told AFP.

Najib has maintained his innocence.