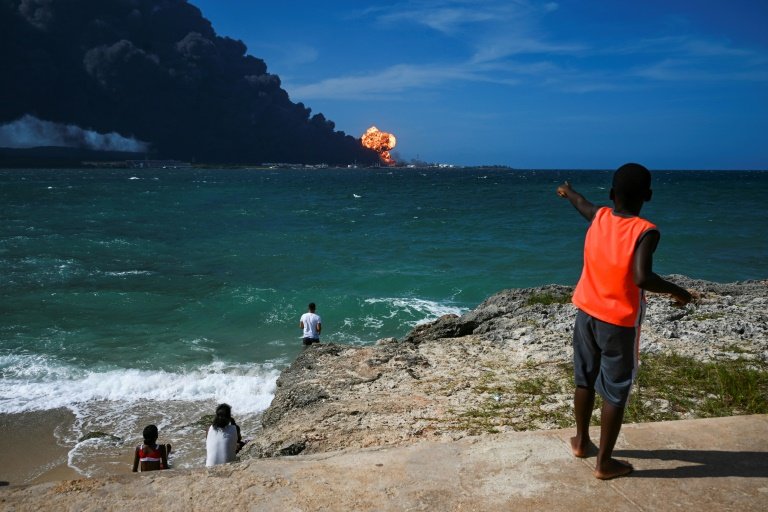 Cubans watch from a distance as a massive fire blazes at the fuel depot in Matanzas, Cuba / © AFP

Helicopters and firefighters battled Tuesday to gain access to four tanks at a fuel depot that has been ablaze for days, hoping to deploy special foam to control the flames.

The fire, which started on Friday, has left one firefighter dead and 14 more missing.

From dawn, AFP reporters saw four military helicopters flying over the depot in Matanzas, an industrial city around 100 kilometers (60 miles) west of Havana, dropping sea water in a bid to extinguish the blaze.

Four out of the eight tanks on site have already fallen victim to the flames, deputy fire chief Alexander Avalos Jorge said, and authorities are now trying to protect the other four.

"The firefighting teams continue to clear a path to the flames so the teams charged with applying the foam can get to the place," said Matanzas governor Mario Sabines on Twitter.

Sabines added that the smoke from the fire had left visibility at a minimum and drones were being used to provide greater precision to operations.

Firefighters and specialists in fuel fires from Mexico and Venezuela have arrived in Cuba to help their local counterparts.

The fire broke out on Friday in the city of 140,000 people after lightning struck one of the tanks at the depot, which is of strategic importance for the island nation.

Each of the eight tanks can hold up to 50 million liters of fuel -- three have collapsed while a fourth has been engulfed by flames.

Some 125 people injured by the blaze were taken to hospital with 22 remaining in care. Some 5,000 people have been evacuated from around the disaster zone, authorities reported.

Two firefighters previously reported as missing have been located among those receiving hospital treatment.