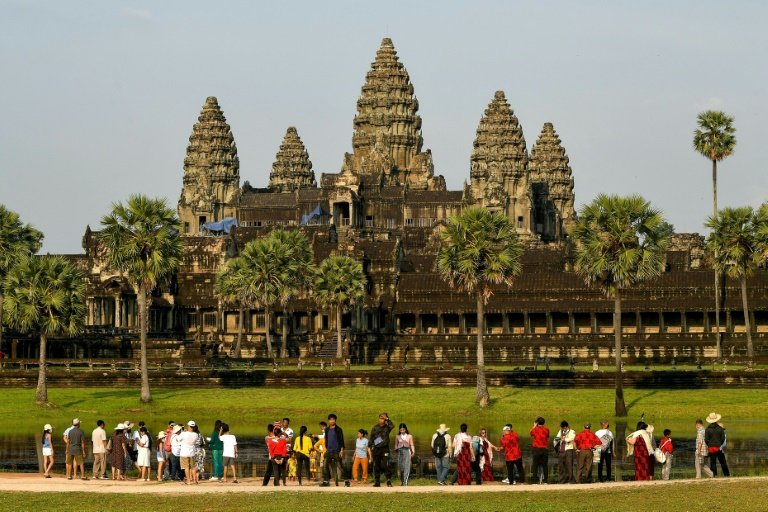 Some of the antiquities had been stolen from the temples of Angkor, such as the temple of Angkor Wat (pictured April 2022) in Cambodia / © AFP/File

The United States on Monday returned 30 stolen works of art and antiquities to Cambodia that had been looted from the southeast Asian nation, including from an ancient Khmer city, and illegally trafficked around the world for decades.

"We celebrate the return of Cambodia's cultural heritage to the Cambodian people, and reaffirm our commitment to reducing the illicit trafficking of art and antiquities," Williams said.

The antiquities, which range from the Bronze Age to the 12th century, had been stolen along with thousands of others during the wars in Cambodia in the 1970s and when the country reopened in the 1990s.

The federal prosecutor's office said that thousands of Khmer statues and sculptures that were trafficked out of Cambodia over the course of decades to antique dealers in Bangkok, before being illegally exported to collectors, businessmen and even museums in Asia, Europe and the United States.

One of the dealers, American Douglas Latchford, was charged in 2019 with art trafficking, but the case was tabled after his death.

The New York prosecutor's office is involved in the restitution of a vast array of works. From the summer of 2020 to the end of 2021, at least 700 pieces have been returned to 14 different countries, including Cambodia, India, Pakistan, Egypt, Iraq, Greece and Italy.

In 2021, American collector Michael Steinhardt returned about 180 antiquities stolen from around the world in recent decades as part of a deal with the government.

The pieces had a total value of $70 million.

The agreement between the US judicial system and Steinhardt, 80, allowed him to escape an indictment but prohibits him from acquiring works on the legal art market for the rest of his life.

Angkor, which at 400 square kilometers (154 square miles) is the largest archaeological site in the world, was the capital of the Khmer empire, which lasted from the ninth to 14th centuries.

The site, which recently reopened to tourists after a two-year pandemic-induced closure, was designated as a UNESCO World Heritage Site in 1992.