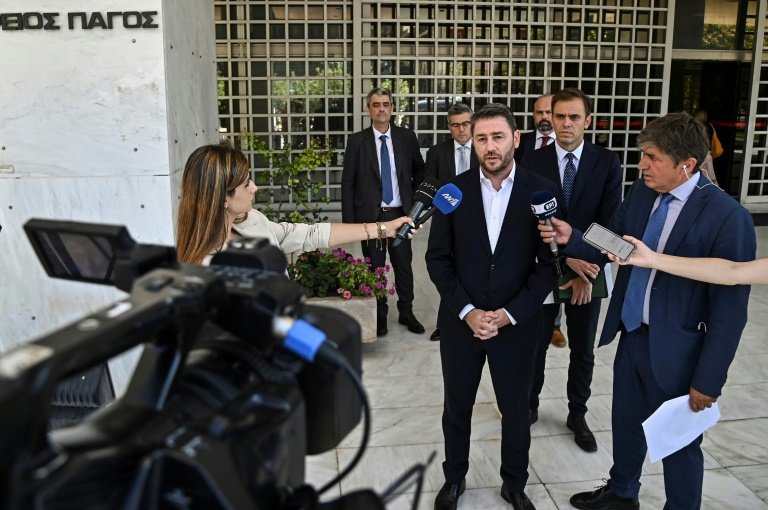 Nikos Androulakis, leader of Greece's opposition Socialists, is taking legal action over the attempted surveillance via spyware Predator of his mobile phone / © Eurokinissi/AFP

Speaking in a televised address three days after two key members of his conservative government resigned over the affair, he said the surveillance had been approved by supreme court prosecutors.

Opposition politicians however said the prime minister's statement still did not explain why the surveillance had been started in the first place -- or who else had been targeted.

The scandal reignited on July 26 when Nikos Androulakis, leader of the opposition Socialists, told journalists about the attempted surveillance via spyware Predator, having filed a legal complaint.

Already this year, two Greek journalists have launched legal actions saying they have been victims of similar attacks on their phones.

Mitsotakis said Monday that he had learned a few days earlier that the national intelligence service (EYP) had started surveillance of Androulakis's phone back in September 2021, when the opposition politician was already a European deputy.

"I didn't know about it," he said. "If I had known, I would never have authorised it."

The surveillance had lasted three months then ended automatically -- in accordance with the law -- in December 2021, just after Androulakis had been elected to the leadership of his party, said Mitsotakis.

The decision by the EYP, Greece's intelligence service, to launch the surveillance was "politically unacceptable".

Referring to "endemic faults" in the agency, he promised a series of reforms to the EYP.

In response, Androulakis said the prime minister's statement still had not explained why he had been put under surveillance in the first place.

He repeated his argument that "this is not a personal matter but a question of democracy". Androulakis has already called for a special parliamentary investigation into the affair.

The main opposition leftwing Syriza party also argued Mitsotakis had still not explained why the EYP had thought it was okay to take "such an unprecedented action".

"How many other politicians, journalists or citizens have been placed under surveillance under his administration?" asked the former Syriza prime minister Alexis Tsipras.

Mitsotakis raised eyebrows when in July 2019 one of his first acts on assuming power was to attach the national intelligence service to his office.

On Friday, the head of the EYP, Panagiotis Kontoleon, and the secretary general of the prime minister's office, Grigoris Dimitriadis -- Mitsotakis's nephew -- both resigned over the affair.

Dimitriadis had been named by the investigative website Reporters United as being linked to the alleged spying scandals involving both Androulakis and Greek financial journalist Thanasis Koukakis.

In April Koukakis, a journalist specialising in financial affairs, went to the courts to denounce an attempt to hack his phone using the Predator malware.

In February, a suspected case of EYP surveillance of journalist Stavros Malichudis, a specialist on migration issues, was brought before the supreme court.

Journalists' unions have denounced what they say is a deterioration in media rights in Greece.

Until Friday's resignations, the government had denied any state involvement in such surveillance.

Predator, originally developed in North Macedonia and subsequently in Israel, can access both messages and conversations, experts say.

Androulakis has said he learned of the surveillance of his phone after using a special service for MEPs to check their phones for illegal surveillance software following hacks using a spyware similar to Predator called Pegasus.