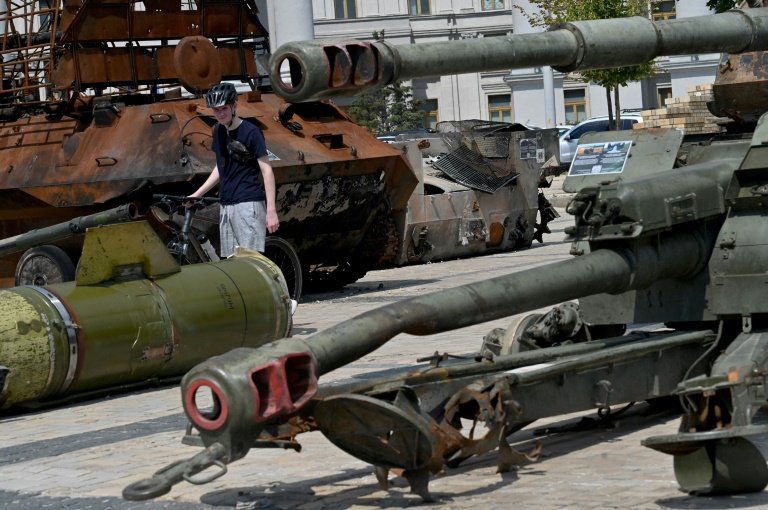 Russia says it is withdrawing its forces from Ukraine's Snake Island in what it said was a move to facilitate the resumption of Ukraine's farm exports.

"On June 30, as a gesture of goodwill, the Russian armed forces completed their tasks on Snake Island and withdrew a garrison stationed there," the Russian defence ministry says, adding that the move showed Moscow was "not impeding" efforts to resume exports from nearby Ukrainian ports.

Ukraine hails the liberation of the "strategically important" island, saying Russian forces were driven out by Ukrainian shelling and missile strikes.

Snake Island became a symbol of Ukrainian resistance after a radio exchange went viral at the start of the war, in which Ukrainian soldiers issued an expletive to a Russian ship that called on them to surrender.

A ship carrying 7,000 tonnes of grain sets sail from Ukraine's occupied port city of Berdyansk, in what pro-Russian officials claim is the first such shipment from a Ukrainian port since the war began.

Berdyansk was one of the first cities to fall to Russian forces at the start of the war.

Evgeny Balitsky, the region's Moscow-appointed administrator says that Russia's navy was safeguarding the shipment of grain, which was headed for unnamed "friendly countries".

A Russian blockade of Ukraine's Black Sea ports has prevented millions of tonnes of grain from being exported, worsening global food shortages.

Ukraine has accused Russia and its allies of stealing its grain, claims also made by the New York Times and BBC among other media outlets.

- Moscow cracks down on foreign media -

Russian lawmakers approve legislation that will make it easier to shut down foreign media, continuing a crackdown on the media and dissent that intensified sharply after the invasion of Ukraine.

The legislation gives the authorities the right "to ban or restrict the activities of media outlets" from foreign countries "in the event of unfriendly actions of a foreign state against Russian media abroad".

Many foreign journalists left Russia after authorities in March introduced prison terms of up to 15 years for spreading "fake news" about the Russian army.

But most major news outlets have maintained a presence in the country.

Russia says it is still holding more than 6,000 Ukrainian prisoners of war.

The announcement comes a day after the two sides announced a prisoner swap, with each side recovering 144 fighters -- the largest exchange since the war began.

The Ukrainian prisoners returned included 95 former defenders of the Azovstal steelworks in the southern port city of Mariupol, where Ukrainian forces held out for weeks.

Britain pledges another £1 billion ($1.2 billion) in military aid to Ukraine to help it fight the invasion, bringing its total support since the start of the war to £2.3 billion.

Britain is one of Ukraine's biggest backers in terms of military aid.

It was one of the first nations to provide Ukraine with lethal military aid such as anti-tank missiles.