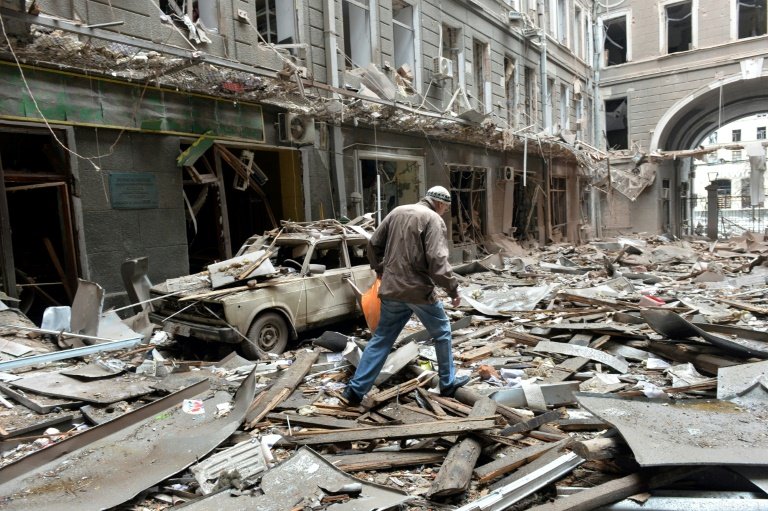 If the conflict ends during their six-month EU presidency, the Czech want to organise the postwar reconstruction of Ukraine / © AFP

The Czech Republic will take over the rotating six-month presidency of the European Union on Friday with all eyes on Ukraine, which has been battling Russian forces since February.

To kick off its presidency, the Czech government will meet European commissioners at a chateau for talks, followed by a concert.

But the Czech turn at the helm -- taking over from France -- is unlikely to offer much leisure as the war rages on four months into the Russian invasion, analysts say.

"This presidency is not geared for good weather, but for bad times," Pavel Havlicek of the Prague-based Association for International Affairs told AFP.

The Central European country of 10.5 million people, an EU-member since 2004, has vowed to focus largely on aid to Ukraine and the war's repercussions.

It wants to help contain the refugee crisis, launch a post-war reconstruction effort, boost the EU's energy security, defence capacities and economic resilience, and improve the resilience of its democratic institutions.

"All the priorities are very well chosen and if we manage to put at least some of them on the table, start talks with partners and reach at least some decisions, I'd say we will not have wasted time," said Havlicek.

The Czechs have won respect abroad by doing their part to help Ukraine, he added.

Since the invasion began on February 24, the Czech Republic has welcomed nearly 400,000 Ukrainian refugees and provided sizeable financial and military aid to Kyiv.

Within the EU it is also a vocal supporter of sanctions against Russia.

Rightwing Prime Minister Petr Fiala, a former political analyst who co-wrote a 992-page book about the EU, recently said he would try to organise a summit with Ukrainian President Volodymyr Zelensky.

The event would also be attended by western Balkan countries whose EU bids, backed by the Czech Republic and others in the region, have recently stalled.

But the summit, which would offer Ukraine a Marshall Plan -- like the US initiative to help western Europe rebuild after World War II -- would only be held if the war were over by then.

But political analyst Jiri Pehe said this precondition made the project unrealistic.

"The conflict will hardly end before the end of the Czech presidency," he told AFP.

"I think the Czechs will just try to organise a summit on Ukraine and... persuade other countries to keep helping the country."

The Czechs were ill-placed to lead a debate on economic recovery or energy security, said Pehe. The country faces high inflation, has yet to join the eurozone and relies on nuclear energy, dismissed by some EU members including Germany, he added.

"It can hardly offer leadership in this respect, and I think it will rather mediate summits or talks on these issues, with other countries taking up the leading role," he said.

Czechs tend to be eurosceptic. A March poll by the STEM agency commissioned by the government showed only 36 percent of them were happy with the EU.

Fiala's centre-right government is less eurosceptic than some of its predecessors, but analysts have questioned its ability to distance itself from EU troublemakers Hungary and Poland.

Prague has close ties with both countries -- and with Slovakia -- within the so-called Visegrad-four group.

Both Hungary and Poland have fallen out of favour with Brussels over their stance on the rule of law.

European Council vice-president Vera Jourova, who is Czech, recently urged the government to take a clear stand on Hungary and Poland as it presides over the 27-member bloc.

But Pehe remained sceptical: "I can't see any chance of the Czech Republic taking a more critical stance."