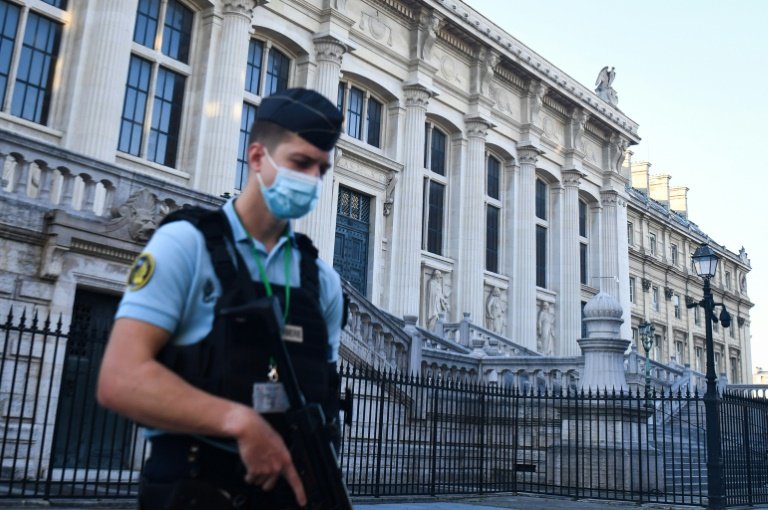 The verdicts are due early evening on Wednesday / © AFP/File

A total of 20 people have been tried over the November 2015 attacks by the Islamic State group on the Bataclan concert hall and other targets around Paris, with the verdicts expected on Wednesday.

Only 14 of them have appeared in person, with the rest missing or presumed to be dead.

Once a pot-smoking party-lover who grew up in the impoverished Molenbeek district of Brussels, Abdeslam turned to radical Islam along with his brother Brahim, who blew himself up in a bar during the Paris attacks. 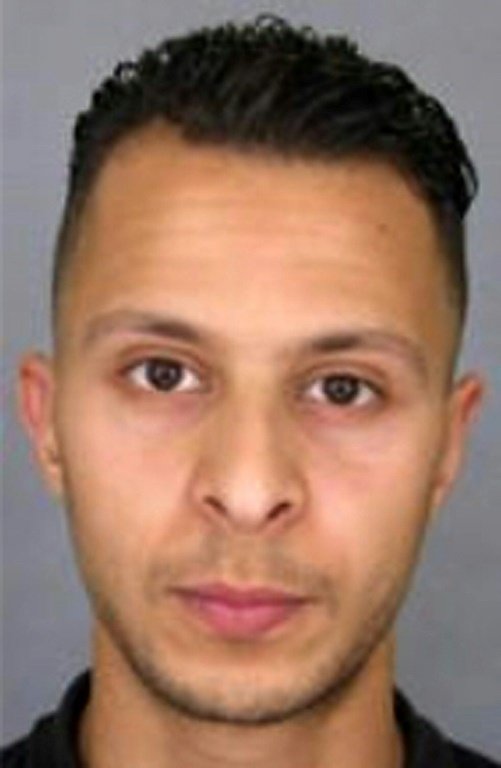 The only surviving attacker gave his profession as an "Islamic State fighter" and recounted religious verses in his first appearance in court in September, but his provocative early behaviour has faded from view.

He broke down in tears in April and apologised to victims, asking them to "hate me with moderation."

He has defended himself by saying he never killed anyone after alleging he backed out of his mission to blow himself up in a bar.

He went on the run for four months after the attacks and was involved in a shootout with police in Brussels, for which he has already been sentenced to 20 years in prison.

His former lawyer in Belgium once described him as having "the intelligence of an empty ashtray".

A childhood friend of Abdeslam and other jihadists from Molenbeek, Abrini is a school dropout and multi-convicted thief who turned to Islamic State's ideology after his radicalised younger brother joined the group and was killed in Syria. 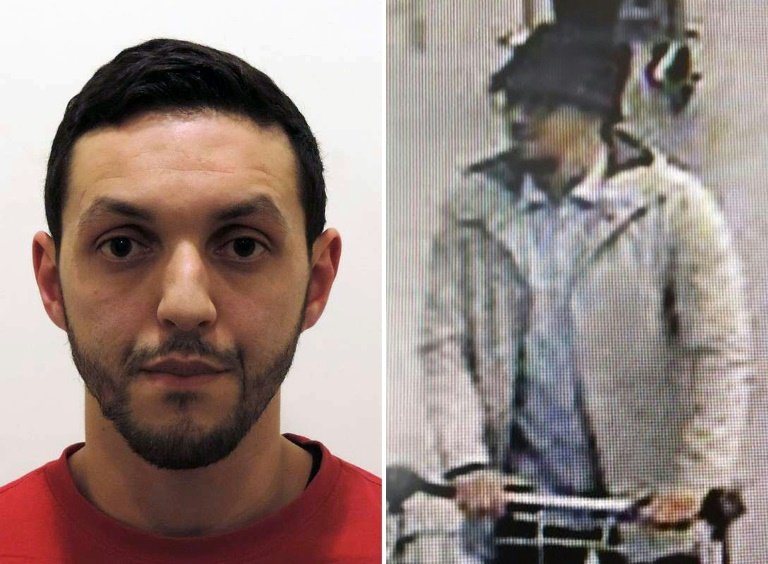 "It's a duty for all Muslims to go to do jihad," he told the court in January, justifying the attacks in Paris as a response to Western bombing against Islamic State and its now-defunct caliphate in Iraq and Syria.

At the end of the trial on Monday, the one-time bakery worker known as "brioche" to friends said it had enabled him "to put faces to the victims".

"I'm aware that what happened is disgusting."

The Belgian claimed that he backed out of the Paris attacks at the last moment, but has admitted meeting the ringleader beforehand and booking cars and safe-houses for the other jihadists.

He took part in separate suicide bombings that struck Brussels in 2016, though he decided not to detonate himself.

Prosecutors asked for a life sentence with 22 years as a minimum term.

A Swede of Syrian and Palestinian origin, Krayem allegedly fled Paris with Abdeslam after the attacks. 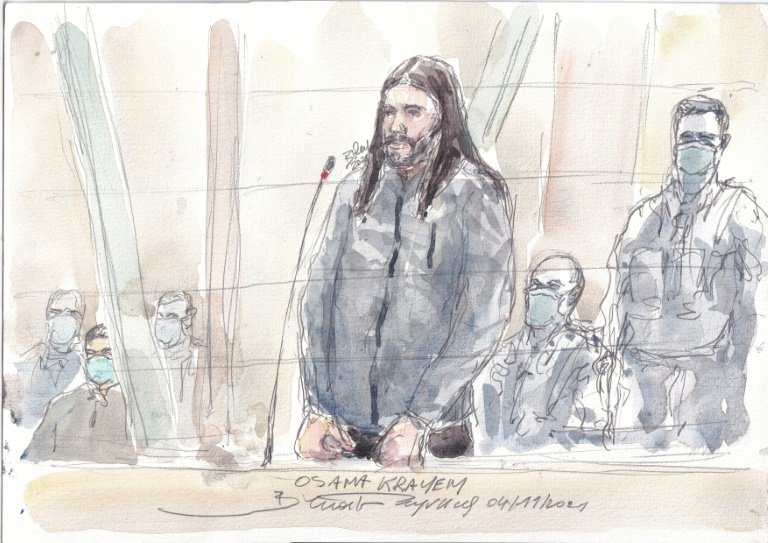 Osama Krayem, depicted here at the start of the trial / © AFP/File

The long-haired jihadist was identified in a notorious IS video showing a Jordanian pilot being burned alive in a cage, thanks to a scar on his eyebrow.

He remained silent for the trial, giving a written statement in January which read: "At the start I thought I would express myself. Then, I saw how the hearings were going and I lost all hope."

He is suspected of planning another attack at Amsterdam's airport along with Ayari, a Tunisian who travelled to Syria to join Islamic State.

Ayari, who was arrested along with Abdeslam, began to explain his past with IS after being "touched" by the testimony of a victim's mother in February, but then refused to answer any more questions.

Arrested two weeks after the Paris bloodbath, the Belgian-Moroccan national is suspected of providing logistical help such as hiring safe houses and cars, providing fake identity papers and helping repatriate IS fighters from Syria.

He was already sentenced to 25 years in prison in Belgium over his role in an attack on a high-speed Paris-bound train that left two passengers injured.

He was handed over to French authorities on the condition that he returned to serve his sentence in Belgium.

He offered apologies to victims on Monday, the last day of hearings.

Usman from Pakistan and Haddidi from Algeria were arrested in Greece as they travelled with two jihadists who went on to blow themselves up outside the national sports stadium in Paris.

The pair were attempting to disguise themselves as refugees in the mass of people heading from Syria to Europe via Turkey and intended to take part in the attacks on Paris, prosecutors said.

"I'm working on myself. In the future I would like to do something good with my life," Haddidi said in his final statement.

He is the younger brother of the man presumed to have overseen the whole operation in Syria: Oussama Atar, a veteran jihadist.

Prosecutors detailed his meetings with key suspects and his family links to the Islamic State cell in Brussels, as well as how a key to a hideout was found at his home.

The court heard earlier how Belgian authorities had granted a passport to his older brother in 2013 despite his known links to radical Islamism -- a possible attempt to recruit him as an informer.

The older Atar is also on trial but is presumed dead in Syria or Iraq.

Five friends and acquaintances of Abdeslam and Abrini are on trial, charged over assistance they gave to the main suspects.

Mohammed Amri, 33, Hamza Attou, 28, and Ali Oulkadi, 37, went to fetch Abdeslam from Paris in the aftermath of the attacks, but denied knowing about his involvement.

Haddad Asufi, 36, and Abdellah Chouaa, 41, were tried for alleged help they gave to Bakkali and Abrini.

Jean-Michel and Fabien Clain, 38 and 41: notorious jihadist brothers from southwest France who featured in an IS video claiming responsibility for the attacks. Presumed dead in Syria.

Ahmed Dahmani, 33: a friend of Abdeslam wanted for providing logistical help. In jail in Turkey.

Obeida Aref Dibo, age unknown: a Syrian IS member, presumed dead, thought to have been a planner.