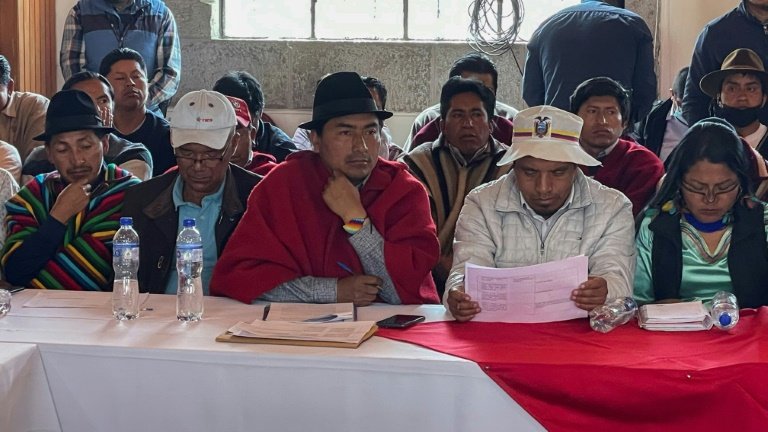 Indigenous leader Leonidas Iza (C) met with members of Ecuador's Parliament and Catholic Church for negotiations to end the latest standoff over the rising cost of living, but the government left the negotiations after a soldier was killed / © AFP

Ecuador's president survived an impeachment vote on Tuesday, as negotiations to end more than two weeks of cost-of-living protests by Indigenous groups were suspended following the death of a soldier.

The opposition-led congress had sought to remove right-wing President Guillermo Lasso over "the serious political crisis and internal commotion" caused by the protests.

But the motion garnered only 80 of the 92 votes needed, according to results read aloud by the parliament's secretary, Alvaro Salazar, in a virtual session broadcast on social media.

"In spite of the coup attempts, today the country's institutions prevailed," Lasso said after the vote. "It is evident who works for the political mafias. Meanwhile, we continue to work for Ecuador."

Earlier in the day, Lasso had accused Indigenous protest leader Leonidas Iza of self-serving politics, saying: "We will not negotiate with those who hold Ecuador hostage."

Iza's powerful Confederation of Indigenous Nationalities of Ecuador (Conaie), in turn, accused the government of "authoritarianism," and said Lasso would bear the consequences for "his hawkish policy."

On Tuesday morning, the military said a soldier died and five police and seven soldiers were injured in an attack on a tanker truck escort in the country's east.

It said a group armed with "spears and guns" attacked uniformed personnel protecting an early-morning convoy of tankers headed for the so-called ITT block of oil fields in Orellana province, where more than a billion barrels are stored.

Interior Minister Patricio Carillo expressed condolences to the family of fallen soldier Jose Chimarro in a tweet, and described the attackers as "violent demonstrators."

The secretary of the Organization of American States, Luis Almagro, also denounced the attack, saying on Twitter that "protests should be peaceful and democratic."

A second day of talks with Indigenous representatives scheduled for Tuesday morning failed to get under way as negotiators from the government did not show up.

Mediator Virgilio Saquicela, president of the National Assembly, announced that the government was "not present" as it was "conducting an analysis" of the early-morning events. 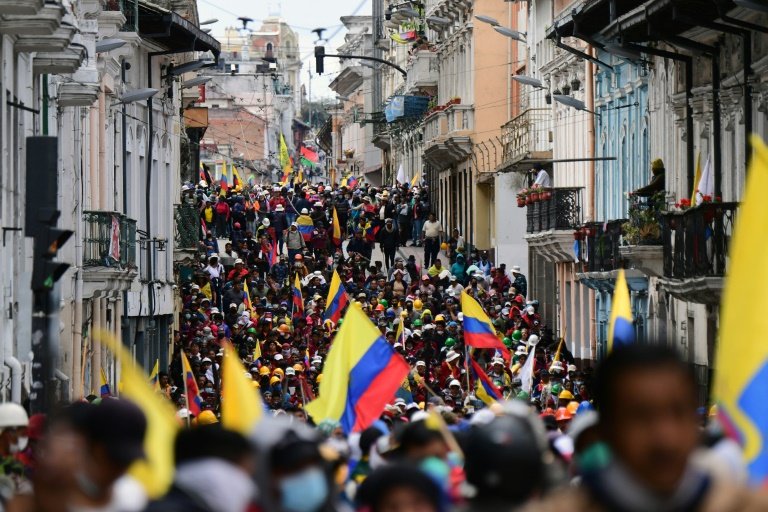 An estimated 14,000 protesters are taking part in a nationwide show of discontent against rising hardship in an economy dealt a serious blow by the coronavirus pandemic / © AFP

Iza referred to a "brutal attack" but said there was no proof protesters were responsible.

Lasso, meanwhile, touted "the efforts we have made to establish a fruitful and sincere dialogue."

"But we will not sit down again to dialogue with Leonidas Iza, who only defends his political interests and not those of his base," he added.

Tuesday's fatality came on top of five demonstrators dead and hundreds of civilians and security personnel wounded in clashes between the security forces and protesters blockading key roads and disrupting supply lines.

Some 150 people have been arrested, according to observers.

At night, protesters clashed with public forces again in the north of the capital, setting two police stations on fire.

"One cannot understand the irrationality and lack of reason in the protests. Ecuador needs peace," Interior Minister Carrillo said on Twitter.

Crude is the South American country's main export, but production has been halved from about 520,000 barrels per day prior to the protests, the government said.

Operations at more than 1,100 wells have been affected.

An estimated 14,000 protesters are taking part in a nationwide show of discontent against rising hardship in an economy dealt a serious blow by the coronavirus pandemic.

Conaie, which called the protest, is credited with unseating three presidents between 1997 and 2005.

Indigenous people make up more than a million of the South American nation's 17.7 million people.

Most of the demonstrators' ire is concentrated in the capital Quito, where some 10,000 people are gathered, most of them from other parts of the country.

Other than fuel price cuts, the protesters want jobs, food price controls, and more public spending on healthcare and education.

The action has been costly, with losses of some $50 million per day to the economy, according to the government, which has warned oil production could come to a complete halt soon. 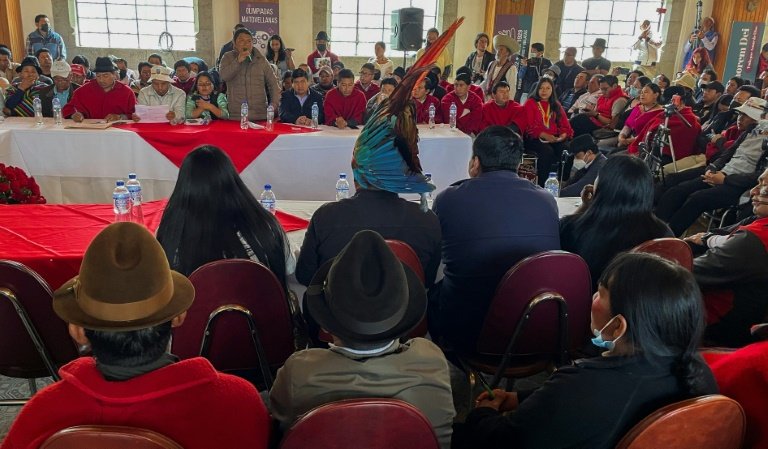 Ecuador's economy is highly dependent on oil revenues, with 65 percent of output exported in the first four months of 2022.

Protesters have set up roadblocks in most of the country's 24 provinces, hampering the delivery of food and flowers -- another key export -- and dealing a blow to tourism.

On Sunday, Lasso announced a 10-cents-per-gallon reduction in diesel and gasoline prices, but this was deemed insufficient by Conaie.

The president has also lifted a state of emergency that had been in place in six provinces and a night-time curfew in Quito.

After the concessions, the two sides met for the first time Monday for talks on ending the protest.