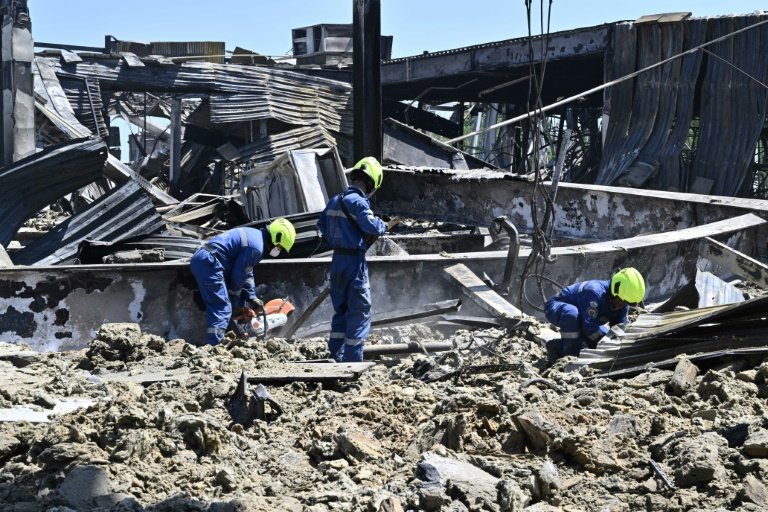 Residents in the Ukrainian city where a missile strike on a crowded mall killed at least 20 people have dismissed the Russian army's version of events as "absurd".

Dozens were injured and many are still missing after the strike set off a blaze inside a shopping centre in Kremenchuk on Monday.

The Russian army claimed Tuesday it had hit a nearby weapons depot with the explosion sparking the blaze at the shopping centre, which according to Moscow was "not operational" at the time.

But several Kremenchuk residents interviewed by AFP said they had not heard of arms being stored in the area.

"We heard that, it's absurd," said Polina Pushintseva.

"When you live here, I wonder how you can believe such things that are pure invention," she added.

No one could survive a fire of such intensity, one firefighter told AFP / © AFP

Pushintseva was in the kitchen of her fourth-floor apartment when the windows shattered from the impact of the attack across the street.

All that remains of the mall is piles of charred debris, wrecked concrete walls blackened by smoke and a few green plastic letters that once made up the sign with the store's name -- "Amstor".

"Next to 'Amstor' in this neighbourhood there is absolutely no military infrastructure, nothing at all," said resident Antonina Shumilova.

"And behind the shopping centre there is a football field."

A 10-minute walk from "Amstor" is a factory that makes construction machinery. AFP journalists visited on Tuesday and found that one of its buildings had been destroyed, while others remained intact. No military equipment could be seen.

A day after the attack, residents are still coming to terms with what happened.

"It was such a shock," Pushintseva said. "My brother quickly arrived at my house, we took our things, papers, money and left."

"Everything burned, absolutely everything. Like a spark. I heard people screaming, it was horrible," she added.

Pushintseva returned to her apartment on Tuesday after a sleepless night away. "I knew people who work in this centre. But they are no longer with us," she said.

"I can't find words to explain this," she added, pointing to cuts from glass shards on her arm.

Local people laid flowers and left children's toys next to the burnt-out store on Tuesday.

Clearing operations were halted for more than an hour as air raid sirens sounded across the central Ukrainian city.

Four large cranes were deployed at the site to lift pieces of heavy metal and gather debris, with fire trucks, rescue vehicles and several army trucks lined up in the mall's parking lot.

Across the street from the mall, Shumilova looked at the scene from inside her beauty salon. The glass of its front door had been shattered by the blast.

Shortly before the strike "there was an air-raid siren and 10 minutes later, two explosions one second apart," said Shumilova, who was with a customer at the time.

They rushed for cover and waited before stepping into the street, she said.

"After a quarter of an hour, everything had already burned down and there were a lot of people. It's horrible," she said, referring to the victims.

In a fire of such intensity, "you have no chance of surviving", said Ivan Melekhovets, a commander of a fire brigade which took part in the rescue operation on Monday.

"The hardest thing is to see the corpses -- adults, children," he told AFP, adding that they were still looking for between 50 and 60 missing people.

"The Russians simply kill people who have done nothing wrong," Pushintseva said.