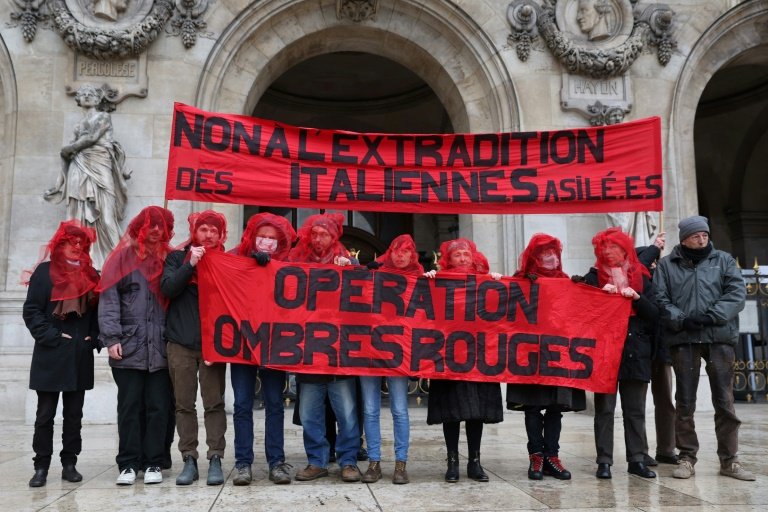 Eight men including Tornaghi and two women, aged 61 to 78, will find out on Wednesday whether a French appeals court approves the extradition requests, potentially paving the way for imprisonment in Italy / © AFP

A former member of left-wing Italian extremist group the Red Brigades exiled in France has said he "will not die in jail" in Italy ahead of a French court's decision this week on his extradition.

Sergio Tornaghi, 64, is wanted for his involvement in assassinations carried out by the Red Brigades who sowed chaos during the period in Italy known as the "Years of Lead" -- named after the number of bullets fired -- from the late 1960s to mid-1980s.

Ten people aged 61 to 78 -- eight men including Tornaghi and two women -- will find out on Wednesday whether a French appeals court approves the extradition requests, potentially paving the way for imprisonment in Italy.

"Who's going to benefit if we rot in jail in Italy?" said Tornaghi in an interview with AFP.

"Whatever happens, I'm not going to go off and die in jail in Italy. Even if there is a favourable opinion for my extradition, I will die in France. I'll let you imagine what that means," added Tornaghi.

Tornaghi, who was sentenced in his absence for being behind the murder of his factory's manager in the Milan underground in 1980, has up until now escaped from many years behind bars thanks to the so-called "Mitterrand Doctrine".

France has long served as a haven for Red Brigades figures under a policy set by former Socialist leader Francois Mitterrand, who offered them protection from extradition on the condition that they renounced violence and had not been accused of bloodshed.

But last year President Emmanuel Macron gave his green light for the detention and potential extradition of ten sentenced former members of the Red Brigades or other armed groups, in a bid to remove a long-standing irritant in Franco-Italian ties.

The former Red Brigades member, who has lived in France for the last four decades where he has built a career in IT and had two daughters, maintains he is innocent.

Tornaghi said he belonged to the political branch of the ultra leftist group and handed out their leaflets but "never participated in any military organisation".

During Tornaghi's trial, magistrates tried over 90 people in three months and examined the full range of crimes -- including murder, kidnapping, kneecapping, heists, subversive propaganda -- allegedly committed by the Milan branch of the Red Brigades in the 1970s.

The decade in Italy was marked by violent social uprisings. Far-right groups carried out random terror attacks in public areas to maintain a "strategy of tension" in a bid to force the emergence of an authoritarian regime.

The Red Brigades were the most notorious on the left and were blamed for hundreds of murders, including the kidnapping and killing of Christian Democrat leader and former premier Aldo Moro in 1978.

This is the political context of Mitterrand's decision, Tornaghi told AFP, who slammed Justice Minister Eric Dupond-Moretti for the "gross comparison" between him and his former associates to those who carried out the November 2015 terror attacks in Paris.

Dupond-Moretti had in a May 2021 radio interview asked if France would have accepted if the November 2015 terror attackers "had gone to live for 40 years in Italy".

But many in Italy believe the ten should face the Italian judiciary.

"The sentences can be discussed and criticised but they must always be respected," said Ambra Minervini, the vice-president of a victims rights' group and daughter of a judge assassinated in 1980 by the Red Brigades.

"The road to a justice worthy of its name can only end with the sentence being carried out," she added.

Tornaghi for his part is calling for an amnesty, a solution, he said, "that would allow old wounds to heal and to begin building a shared history".

"If we carry on cultivating hatred by calling for old fogies like me, we'll never get over it," Tornaghi said.