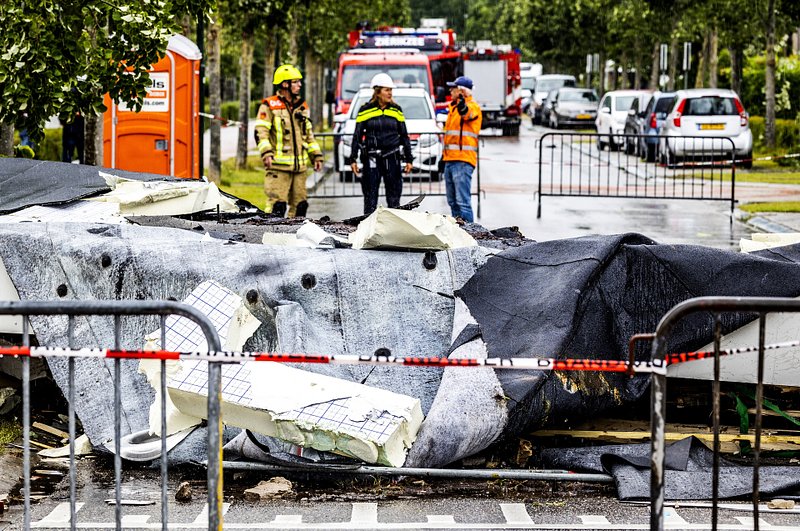 A police officer listens to explanations from a city employee after a tornado hit Zierikzee on June 27, 2022. / © Jeffrey GROENEWEG / ANP / AFP

A tornado ripped through a southwestern Dutch city on Monday, killing one person and injuring nine others in the first fatal twister to hit the country for three decades.

The whirlwind left a trail of destruction through the seaside city of Zierikzee, ripping the roofs off homes and toppling trees onto cars, an AFP journalist at the scene said.

Images on social media showed debris rotating in the air in the fierce winds and a huge funnel descending from stormy clouds as the tornado hit the city in the scenic province of Zeeland.

"The damage is considerable in several streets in Zierikzee. In addition to flying roof tiles and fallen trees, roofs have been blown off four houses," the Zeeland safety authority said.

"Unfortunately, there was one fatality in the tornado," it said, adding that one injured person was taken to hospital and eight others were treated on site by paramedics.

It said there had been a "huge deployment" of emergency services. 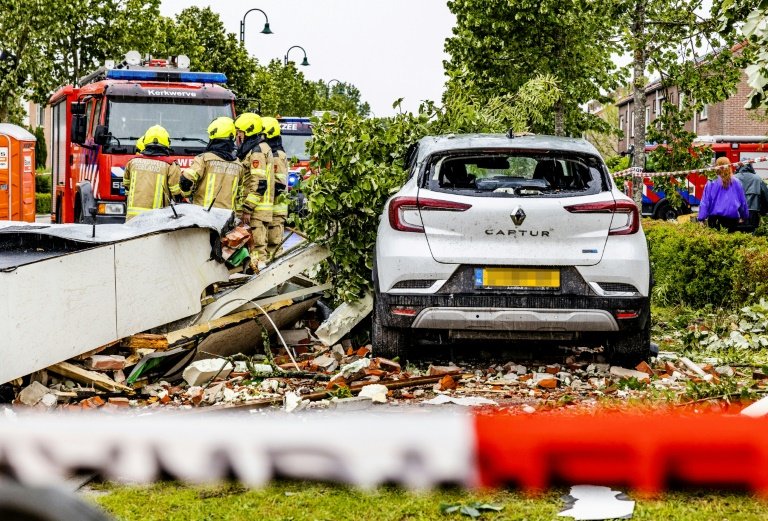 A local newspaper, the Provinciale Zeeuwse Courant, described the scene as a "war zone" and said the victim of the tornado was a tourist who was hit on the head by a roof tile in the city's harbour area.

"It got completely dark. Outside you could see everything flying, everything in the air," Zierikzee resident Freek Kouwenberg, 72, told AFP.

"The whirlwind kept getting bigger. It reminded me of American films, with those storm chasers," resident Maurice van den Nouweland was quoted as saying by the Dutch national news agency ANP.

The tornado hit at the start of the tourism season in Zierikzee, which sits on one of the bridge-connected islands that comprise Zeeland province, whose attractions include a historic fishing harbour and the 15th century "Fat Tower".

Its path could be traced through one neighbourhood, where the twister tore a huge piece of black roofing off the top of a block of four terraced houses and dumped it in a residential street, an AFP journalist said.

A mechanical digger was lifting debris from the road near to where a car lay partly crushed by a tree. Firefighters had sealed off the road with tape while they carried out searches.

Footage on social media showed debris swirling through the air while powerful winds whipped through the town. Other images showed the tornado itself spiralling towards the ground as people stopped their cars or left their restaurant tables to watch.

Local authorities were arranging shelter for the inhabitants of dozens of rental homes left temporarily uninhabitable by the whirlwind, and residents were also being offered counselling.

The Netherlands' flat landscape sitting just above sea level makes it vulnerable to extreme weather, although the Dutch meteorological agency KNMI said it only experiences a few tornadoes a year.

The last fatal one to hit the country was in 1992, the KNMI said, while the deadliest recorded hit the southern villages of Chaam and Tricht on June 25, 1967, killing seven people. There were also deadly twisters in 1972 and 1981.

"Heavy whirlwinds, also called a tornado, are rare in our country," the KNMI said on its website after Monday's twister.

"The area in which they occur is usually no larger than a narrow track of two to several tens of kilometres (miles) in length and a few hundred metres (feet) in width."