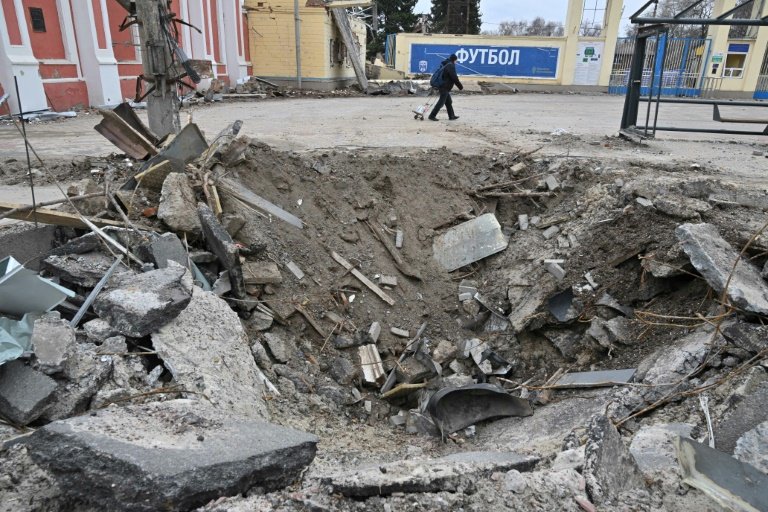 Ukraine said it came under "massive bombardment" Saturday from neighbouring Belarus, a Russian ally not officially involved in the conflict, the day after announcing a retreat from the strategic city of Severodonetsk.

Twenty rockets targeted the village of Desna in the northern Chernigiv region, Ukraine's northern military command said in a statement, adding that infrastructure was hit, but no casualties had yet been reported.

Belarus has provided logistic support to Moscow since the February 24 invasion, particularly in the first few weeks, and like Russia has been targeted by Western sanctions -- but is officially not involved in the conflict.

"Today's strike is directly linked to Kremlin efforts to pull Belarus as a co-belligerent into the war in Ukraine," the Ukrainian intelligence service said.

The strikes came ahead of a planned meeting between Russian President Vladimir Putin meets his Belarussian counterpart and close ally Alexander Lukashenko in Saint Petersburg on Saturday.

The decision "confirms that a geopolitical monopolisation of the CIS (Commonwealth of Independent States) space is continuing actively in order to contain Russia," foreign ministry spokeswoman Maria Zakharova said in a statement.

Ukraine's Western allies meanwhile will gather on Sunday at a summit of G7 leaders in Germany, where President Volodymyr Zelensky is set to speak.

US President Joe Biden will be attending the G7 and a summit of the NATO military alliance in Madrid next week.

In the face-to-face talks, the Western allies will take stock of the effectiveness of sanctions imposed so far against Moscow, consider possible new aid for Ukraine, and begin turning their eye to longer-term reconstruction plans.

The European Union offered a strong statement of support on Thursday when it granted Ukraine candidate status, although the path to membership is long.

Moscow dismissed the EU decision as a move to "contain Russia" geopolitically.

After four months, the conflict remains focused on the Donbas region of eastern Ukraine, where Kyiv's forces have finally given up a key hold-out, the industrial city of Severodonetsk.

Sergiy Gaiday, governor of the Lugansk region that includes the city, said on Friday that the military had received the order to withdraw.

"Remaining in positions that have been relentlessly shelled for months just doesn't make sense," he said on Telegram, adding that 90 percent of the city had been damaged.

Severodonetsk has been the scene of weeks of street battles as outgunned Ukrainians put up a stubborn defence.

Capturing the city and its twin across the river, Lysychansk, would effectively give the Russians control of Lugansk, and allow them to push further into the wider Donbas.

But Ukraine's retreat from Severodonetsk will not change the course of the war, said Ivan Klyszcz, an international relations researcher at Estonia's University of Tartu.

"The big picture -- of a slow war of entrenched positions -- has hardly changed. We cannot expect a massive Russian breakthrough," he told AFP.

Separately, Russia said Saturday its troops had killed up to 80 Polish fighters in "precision strikes" on a factory in Konstantinovka" in the Donetsk region. The claim could not be independently verified.

Gaiday said Russians were now advancing on Lysychansk, which has been facing increasingly heavy bombardments.

The situation for those that remain in the city is bleak.

Liliya Nesterenko, who was cycling toward a friend's house to feed her pets, said her home had no gas, water or electricity, forcing her and her mother to cook on a campfire.

But the 39-year-old was upbeat about the city's defences: "I believe in our Ukrainian army, they should (be able to) cope."

Andrei Marochko, a spokesman for the Moscow-backed army of Lugansk, said Friday that all the villages in the neighbouring areas of Zolote and Hirske were now under the control of Russian or pro-Russian forces.

In a video on Marochko's Telegram channel, a man in military clothing could be seen replacing a Ukrainian flag featuring a Zolote coat of arms with a red hammer-and-sickle flag.

Russia's defence ministry said Friday that up to 2,000 people were "completely blocked" near Zolote and Hirske, and that around half of Zolote was under Russian control.

Russia has also intensified its offensive in the northern city of Kharkiv in recent days.

An AFP team on Saturday saw a 10-storey administrative building in the city-centre hit by missiles overnight, causing a fire but no casualties.

It had already been bombed, prompting one soldier on the scene to note: "The Russians are finishing what they started."

On Friday, the same reporters found a stray dog eating human remains in the town of Chuguiv, southeast of Kharkiv, where an attack earlier this week left six dead.

In the southern Kherson region, a Moscow-appointed official was killed by an explosive device planted in his car, Russian news agencies reported.

Moscow's deputy head of Kherson, Kirill Stremousov, said the regional head of the department of family, youth and sports had died "as a result of a terrorist act".

It was the first confirmed death of a pro-Russian official during a string of attacks on pro-Kremlin officials in Ukrainian regions under Russian control.