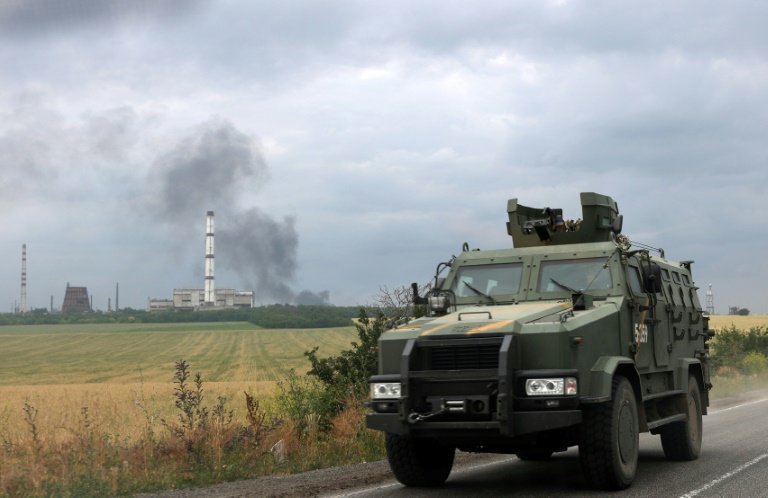 The road between Siversk and Bakhmut was busy with armoured personnel carriers, jeeps and ambulances / © AFP

Driving out of the devastated eastern Ukrainian city of Lysychansk Thursday, AFP journalists twice had to jump out of cars and lie on the ground as Russian forces shelled the city's main supply road.

Soon after noon (0900 GMT), an AFP team saw dark smoke rising over the road ahead.

They heard artillery fire and saw flashes of light, while the road was strewn with trees felled by shelling.

They twice saw a salvo of Grad rockets exploding both sides of the key supply road as Moscow's troops intensify their onslaught.

Twice, drivers braked swiftly and the team jumped out and lay in the grass on the roadside, to the sound of hissing and detonation.

One journalist suffered a scraped arm and a car windscreen was slightly damaged.

This happened on the road between the towns of Siversk and Bakhmut, now the main route being used to reach the city of Lysychansk, since a highway has long been under shelling.

The road was busy at that time with tanks on transporters, armoured personnel carriers, jeeps and ambulances travelling back and forth.

Earlier Thursday, there were also vapour trails in the sky from missiles and a possible jet plane.

A huge cloud of smoke rose into the sky from the vicinity of a disused oil refinery near Lysychansk.

As the city faces an increasingly desperate battle for its control, the main police station had locked its doors Thursday after suffering fresh shelling, following an earlier direct hit on Monday, AFP journalists saw. 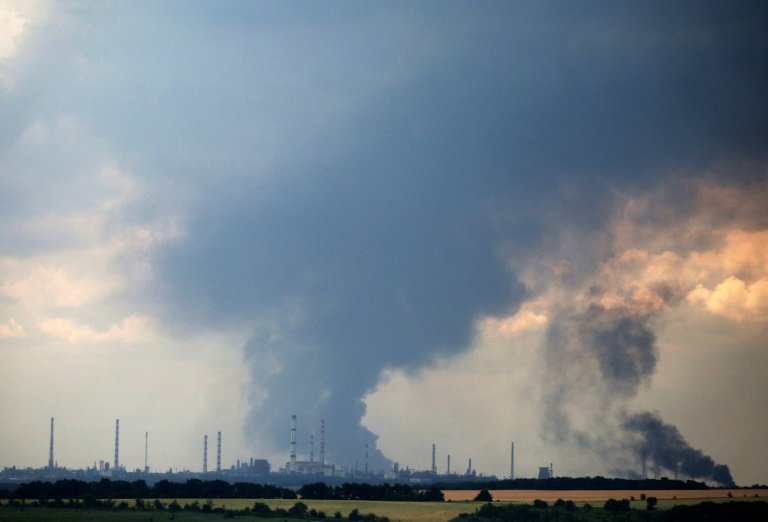 The entrance steps to the building were scattered with strips of siding from the destroyed porch and sand from torn sandbags. There was also fresh damage to the building's side wall.

The police station had been a hub for locals left in the city to find help to evacuate or register deaths. It was still functioning Tuesday.

"People are saying they (police) have all left," said a firefighter called Andriy at the main fire station.

Outside, people were filling plastic bottles with water for household use from a fire engine in the yard.

Just 17 people left in an evacuation Thursday morning, he said.

At the entrance to the city, soldiers were digging fresh trenches in apparent preparation for any Russian attempt to storm the city.

A World War II-era tank painted with a red star had even been removed from the pedestal war memorial and placed on a central street.

A soldier who gave his name as Oleksandr, who was shopping for food nearby, said he was not clear on the reason.

"It's incredible: why they did it, I don't know. That's a tank from World War II, a T34-85 tank. It fought for the motherland, for the USSR. These are already different countries now."

Oleksandr denied police had exited the city, saying he had seen them that day.

Asked if the army was preparing for street fighting, he declined to answer.

"We are defending our motherland," he said, smiling.

"I can't say anything concrete." 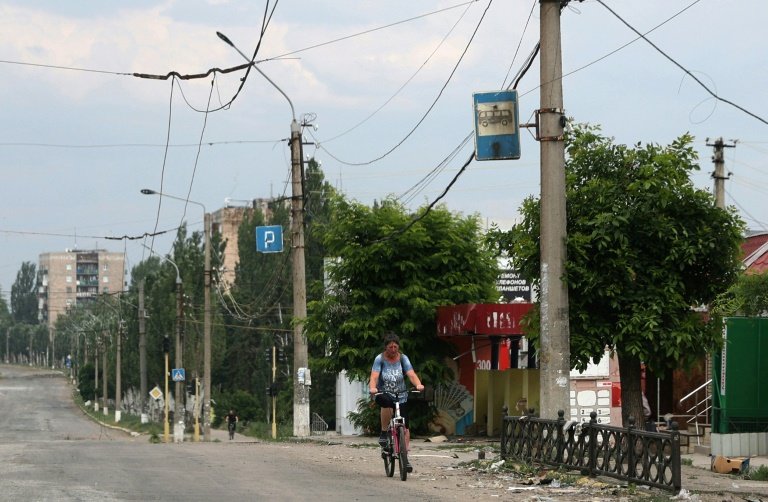 Lysychansk faces an increasingly desperate battle for its control / © AFP

Liliya Nesterenko, 39, was cycling along a street near the closed police station.

"They (police) must be in another place, they won't abandon the city," she said.

Dressed in a summer top and shorts, she was upbeat about the city's defences and said she was not planning to evacuate.

"I believe in our Ukrainian army, they should cope," she said.

Like other locals, she said her house had no gas, water or electricity and she and her mother were cooking on a campfire. She had come out to feed a friend's pets.

The firefighter Andriy said that shelling had been intense that morning.

"There are a lot of injured," he said.

"People were going out to shop and they started shelling."

Locals could be seen at a market and walking and cycling along the streets, some with children.

One older woman was walking along wearing a smart jacket, hat and amber necklace.

"It's necessary," she said of keeping up appearances.

"Say hi to France. You'll never see the like of this."